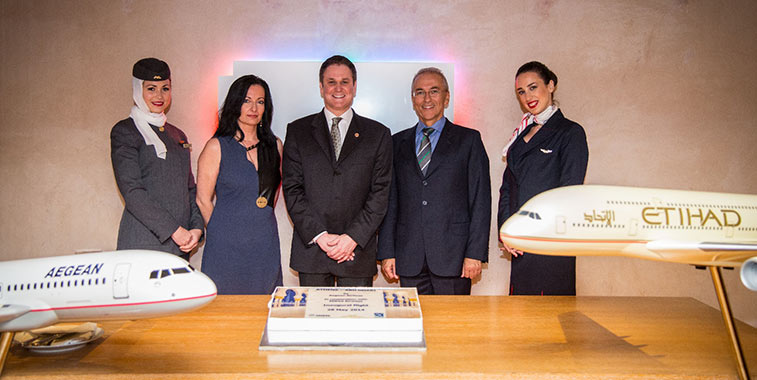 On 28 May 2014 Aegean Airlines launched four times weekly service to Abu Dhabi. The 3,265-kilometre route was the longest then operated by the airline. Etihad Airways, which serves Athens from Abu Dhabi in its own right, codeshares on the flight. Celebrating the launch with a cake were: Ioanna Papadopoulou, Marketing Director, Athens Airport; Peter Baumgartner, CCO, Etihad Airways; and Dimitris Gerogiannis, Managing Director, Aegean Airlines.

Aegean Airlines, the leading airline in Greece, plans to launch some 50 new routes this summer from its various bases in Greece and Cyprus. Some of these routes have been launched from its Larnaca base in Cyprus following the demise of Cyprus Airways at the beginning of the year, but even before this the airline was looking to grow its network significantly, with plans to add 14 new destinations in 12 countries across Europe and the Middle East. In October 2013 Aegean completed its acquisition of Olympic Air, which still operates with its own brand on a number of domestic, mostly PSO (Public Service Obligation) routes, as well as operating flights on behalf of Aegean.

In 2013 Aegean carried 6.9 million passengers on its network (of which four million were on international flights) with Olympic Air transporting a further 1.9 million. Last year the two carriers combined transported an estimated 10 million passengers, though the airline has yet to confirm this. This represents passenger growth of 14%. Going into 2015 the airline’s fleet comprises 50 aircraft of which 36 are A320-series aircraft and the remainder are Bombardier turboprops. The fleet is expected to grow by an additional six A320-series aircraft during 2015, allowing the airline to increase its annual seat capacity from 13 million in 2014 to 15 million in 2015. 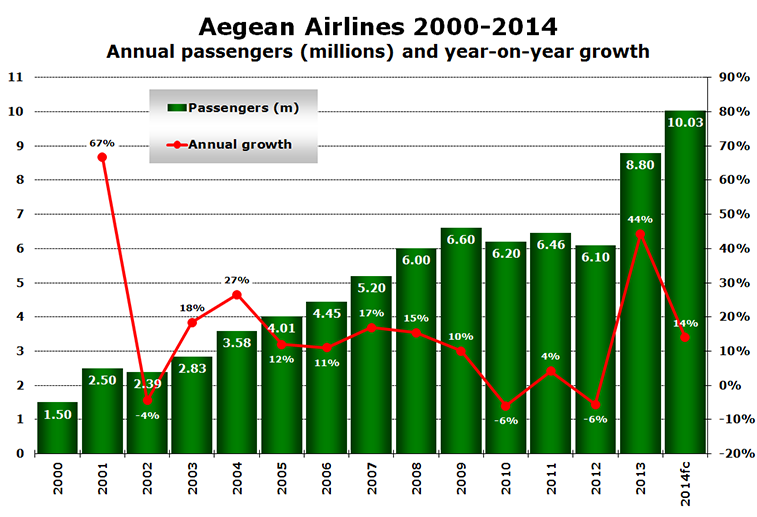 Of the airline’s 36 Airbus aircraft, 19 were based at Athens last summer. The remaining 17 were split across eight other bases; Heraklion (five aircraft), Thessaloniki (four), Rhodes (three) and Chania, Corfu, Kalamata, Kos and Larnaca (one each). On 13 January Aegean announced that it would increase its presence in Larnaca from one aircraft to four. This was just four days after Cyprus Airways announced that it would cease operating with immediate effect.

Analysis of schedule data for Aegean Airlines (as marketing airline) comparing August 2015 with August 2012 shows how impressively the airline has grown across many airports. Athens is clearly the airline’s main base with almost 900 weekly departures this summer. Growth of almost 90% reflects the taking over of some Olympic Air services, but also organic growth of its own. The next nine busiest airports combined for Aegean still do not generate as many weekly flights as Athens. Greek airports account for eight of Aegean’s top 10 airports with the exceptions (shown in light green) being Larnaca and Paris. 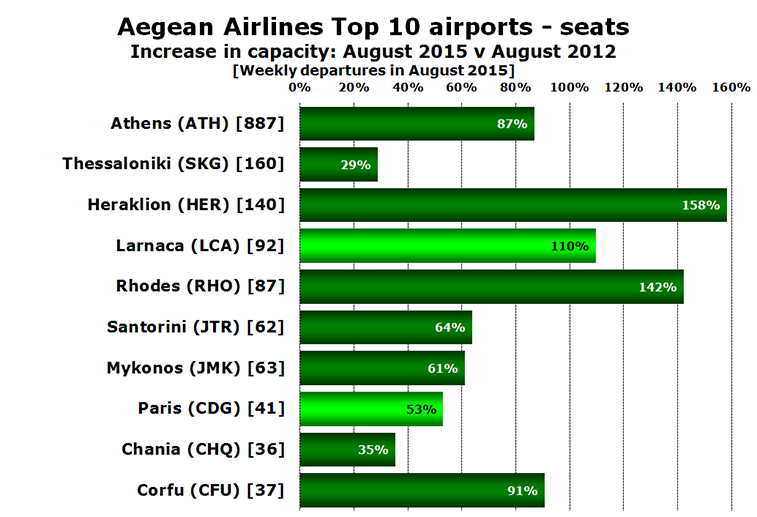 Considering that Aegean is a member of the Star Alliance it is maybe surprising that the airline’s leading non-Mediterranean destination is Paris, home of SkyTeam’s Air France. However, this summer Aegean will be operating up to seven flights per day to the French capital, from six airports in Greece (Athens, Corfu, Heraklion, Kalamata, Rhodes and Thessaloniki) as well as Larnaca.

Analysis of schedule for this August reveals that Aegean will be operating 50 routes that it was not operating last summer. Nearly all of these are routes that the airline has not previously offered as scheduled flights. These are summarised in the following table.

According to anna.aero’s New Route Database, Aegean launched 39 new routes during 2014, including 12 new routes from Athens. Joining the network from the Greek capital last year were Abu Dhabi, Amman and Beirut in the Middle East, plus Birmingham, Catania, Copenhagen, Hamburg, Izmir, Marseille, Nantes, Stockholm and Zurich in Europe. Hamburg was one of 12 new Aegean Airlines routes launched last summer from Athens. The thrice-weekly service was launched on 27 May and was celebrated at the German airport with a splendid cake.