While it is home to an estimated population of 51 million, who like to describe their home country’s economic success as “Miracle on the Han River”, South Korea has become the world’s 14th largest economy in terms of GDP. But there’s no miracle here: rapid export-fuelled growth first transformed the country into one of the world’s most industrialized, and more recently, helped it weather the global crisis untouched. In addition the country is also a regional power having the world’s 10th largest defence budget and being member of the G-20 and OECD’s Development Assistance Committee. Strong economic performance and the country’s high exposure to international trade have long been the driving forces in the development of South Korean commercial aviation. As a result, the country’s air traffic has grown by 5.7% (measured in CAGR) since anna.aero last looked at this market five years ago.

Overall, South Korea is served by 14 commercial airports providing scheduled airline services (according to Innovata scheduled data for 2015). Considering half of the country’s population resides in the metropolitan area surrounding the capital, the combined traffic of the two airports serving Seoul commanded 63% of the total passengers in this country market last year. Notably, Incheon handles prevailingly international traffic, while the capital’s second facility, Gimpo, commands most of domestic movements in Seoul. 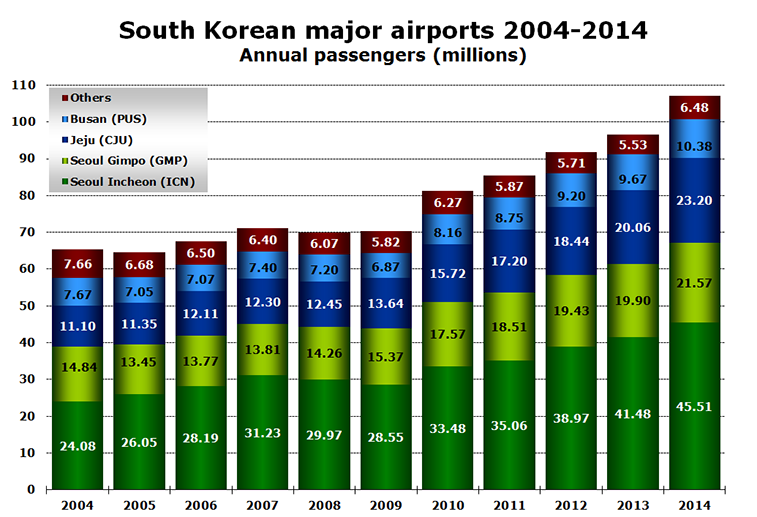 Overall, looking at traffic development between 2004 and 2014, the combined passengers of South Korean airports grew with an average annual growth rate (CAGR) of 4.6% over this timeframe, with Jeju recording the biggest growth (+6%). The airport, located on the island of Jeju, has continued to grow remarkably thanks to its entertainment facilities and the fact that the mainland high-speed rail system has not impacted its domestic traffic. Interestingly, South Korea saw growth since 2004, with the exception of 2005 and 2008, when modest declines of 1.2% and 1.7% were noted.

As of February 2015, the top 12 carriers serving the South Korean market account for 86% and 87% of all weekly seats and flights respectively. The national flag carrier, Korean Air, is by far the dominant operator in this country market, as it commands 31% of the total market, being followed by Asiana Airlines with 24%. The former, a SkyTeam member, operates a total of 142 airport pairs, of which 110 are international routes. The sectors from Incheon to both Hong Kong and Tokyo Narita are Korean’s most frequently served international routes with four daily departures, followed by the 3,684-kilometre airport pair to Bangkok Suvarnabhumi with 27 weekly flights. Furthermore, the airline has a 35% share of weekly seats in the South Korean domestic market, on which it directly competes with Jin Air, Jeju Air, Asiana, t’way air and Easter Jet. 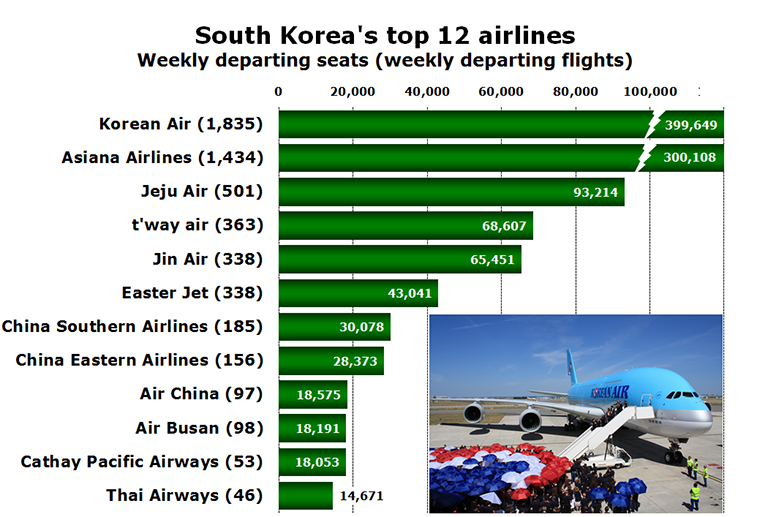 Total weekly seat capacity in South Korea has gone up 15% with all top dozen carriers recording growth, when comparing data from this February with the same week last year. t’way air is the fastest growing operator, increasing its weekly capacity by over 84% or 31,374 weekly seats due to expanding massively with eight new routes, namely linking Jeju to Kwangju, Muan, Nanning and Daegu, as well as connecting Incheon to Haikou, Oita, Okinawa and Taichung. Classified as the second fastest growing airline in South Korea with a yearly increase of 58%, Air China introduced flights from Chongqing to Incheon (nine times weekly) and from Hangzhou and Beijing to Jeju (thrice-weekly and four times weekly respectively) over the last 12 months.

While the domestic sector is South Korea’s biggest country market representing 41% of all weekly seats, a total of 42 countries can be reached non-stop from South Korean airports according to Innovata schedule data for this month. At around 204,300 weekly seats and 37% more than in the corresponding week last year, China remains the dominant international market, being served by 20 airlines with a combined 1,052 weekly departures from Incheon, Gimpo, Daegu, Jeju, Busan, Cheongju, Muan and Yangyang. In fact, on 13 February, Jeju Air commenced its first route to China with the addition of thrice-weekly flights from Daegu to Beijing. 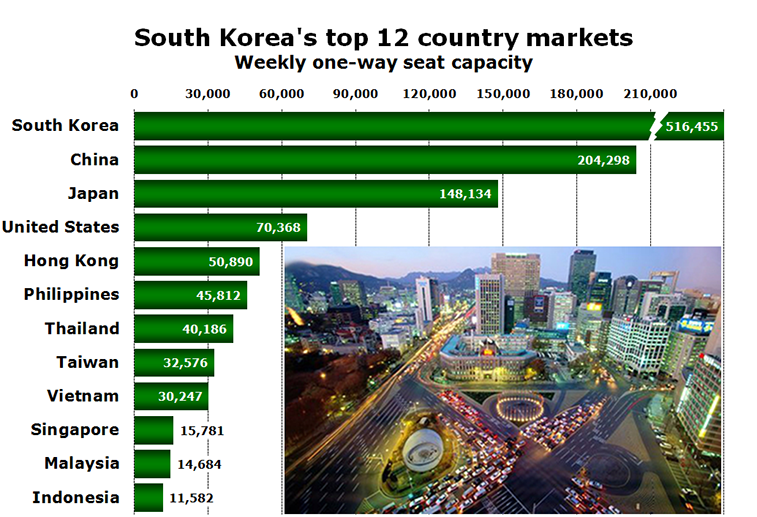 While China is also the fastest growing market, being followed by Hong Kong with an increase of 36% and Vietnam with 33%; Thailand has witnessed the most significant decline (-12% or 5,438 fewer seats), due in part to Business Air having ceased its flights from Suvarnabhumi, Chiang Mai and Phuket to Incheon on 16 January 2015. 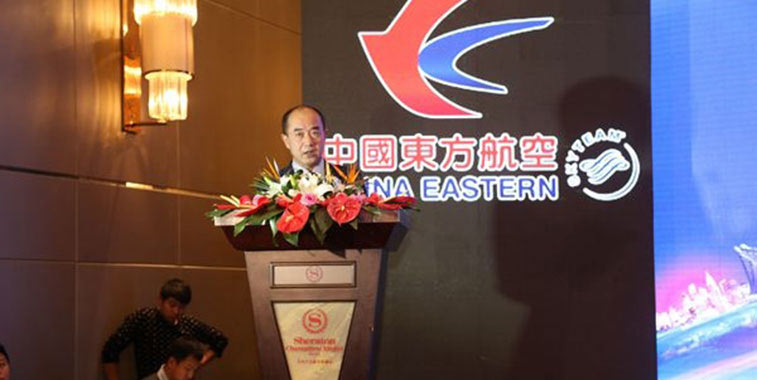