United Airlines grows by 2.7% at Houston Intercontinental Airport in 2014; 175 destinations served this March United Airlines, which leads the international market out of Houston Intercontinental Airport with a weekly seat share of 73%, expanded its offering from the airport on 25 April 2014, when it added daily operations to Munich using its 767-400s.

Houston Intercontinental Airport (IAH) is a major gateway to the state of Texas serving the Greater Houston metropolitan area (the fifth largest in the US), and it is also the busiest operational hub for the third biggest carrier in terms of passengers carried in 2014, namely United Airlines. This March, United offers around 18,000 more weekly seats from IAH than the second busiest airport for the Star Alliance member, Chicago O’Hare, a lead that has decreased in the last 12 months. Over the same timeframe, the gap between IAH and the airline’s third biggest base at New York Newark has grown from 86,000 weekly seats to over 88,000. Overall, all three major bases of United posted capacity growth, with O’Hare (+3.3%) outperforming IAH (+1.5%) and Newark (+1.2%).

United Airlines grows by 2.7% at Intercontinental in 2014

Analysis of data facilitated by Houston Airport System reveals that United along with its regional partners (ExpressJet Airlines, Mesa Airlines, Shuttle America, Skywest Airlines and Trans States Airlines) handled over 33 million passengers at the airport last year, representing an increase of 2.7% when compared to 2013 figures. In total IAH handled 41.25 million passengers last year, up 3.6% on the previous year. 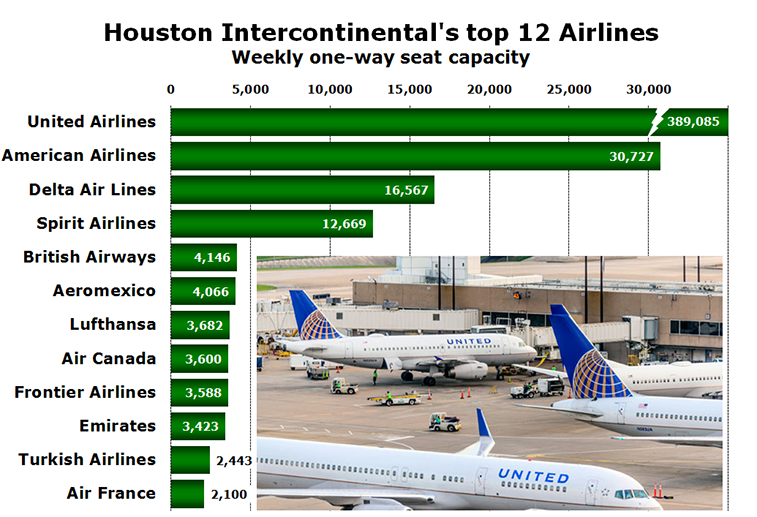 Examination of Innovata schedule data for the third month of 2015 indicates that the Star Alliance member is the clear market leader at Intercontinental, with a weekly seat share of 79% (2% less than in the corresponding month of 2014), followed by American Airlines (with 6.3%) and Delta Air Lines (3.4%). Moreover, domestic traffic represents 59% of total seat capacity United offers out of IAH, giving it an 82% share of domestic capacity at the airport (above American and Delta with 4.8% and 4.7% respectively). In addition, United leads the international market out of IAH as well, controlling 73% of total seat capacity, followed by British Airways and Aeromexico at only 3.1% and 3% respectively. In fact, the carrier has expanded its international offering from IAH on 25 April 2014, when it commenced daily flights to Munich utilising its 767-400s.

A total of 175 destinations served from Intercontinental

For the week being analysed, United operates a total of 175 non-stop routes from IAH, with an average weekly frequency of 22. By comparison the airline offers 163 destinations from O’Hare and 144 from Newark, with the former being served with an average weekly frequency of 24, and the latter being operated with 19. The Star Alliance member’s top 12 routes from IAH account for 21% of all weekly departures (up 1% from last year’s figures), of which O’Hare is still the most frequently flown destination. 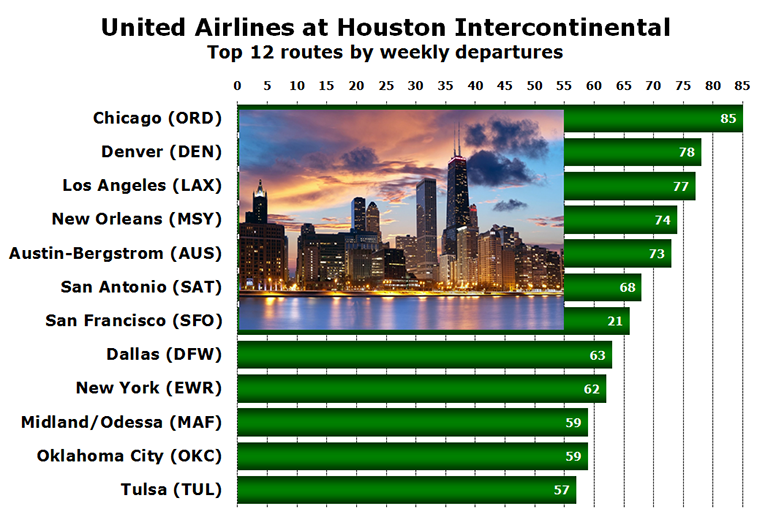 United’s weekly departures at Intercontinental posted a decline of 3.6% this March, with five of the top dozen sectors growing, while operations to Los Angeles have remained unchanged. The 690-kilometre sector to Midland/Odessa (in Texas) is the fastest-growing airport pair (+13% or an additional daily departure). On the other hand, the route to Newark has seen the greatest capacity decrease (-14%), following the airline’s withdrawal of 10 weekly departures over the last 12 months.

Heathrow is #1 route by ASKs

Analysis of which of United’s routes from IAH offer the most capacity measured by ASKs (Available Seat Kilometres) still sees London Heathrow top the list. Interestingly, four of the top dozen routes are on long-haul international services (highlighted in bright green), including two to Europe (Heathrow and Amsterdam), one to South America (Rio de Janeiro Galeao) as well as one to Asia (Tokyo Narita). Overall, United flies to a total of 28 international country markets from IAH this March, with Mexico being the most extensively served with a combined 382 weekly departures to 26 points in the country. 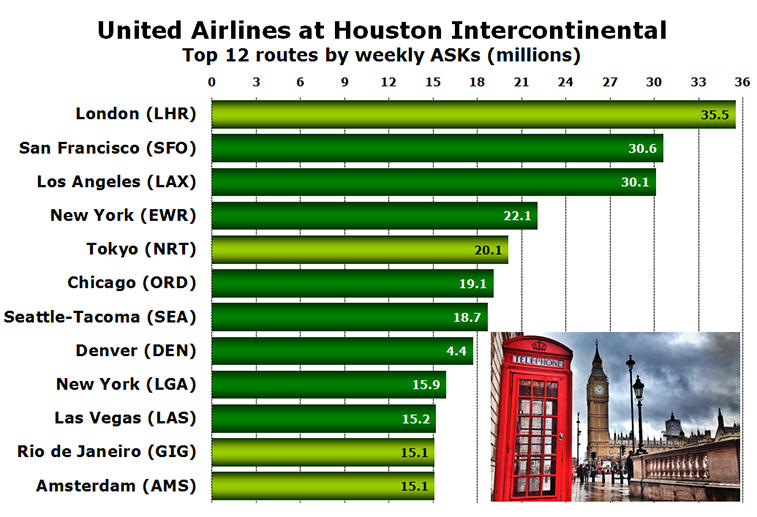 The 2,631-kilometre sector to San Francisco is the fastest growing route (+7.7%) this March (when compared to data from the corresponding week last year), while the IAH-New York LaGuardia airport pair provided the greatest capacity fall (-16%). The Star Alliance carrier has reduced its frequency on the 2,279-kilometre link to LaGuardia from 58 times weekly to 49 times weekly over the past 12 months.

A total of 10 new destinations added since March 2014

Innovata schedule data for this March indicates that United has introduced 10 new destinations from IAH since the corresponding month last year, while it has ceased its daily operations to Saltillo in Mexico as well as its weekly services to Santa Fe in the USA. Four of the new additions are international routes, with the 8,718-kilometre airport pair to the German airport being the longest sector introduced. Interestingly, the average weekly frequency across the 10 new routes is 7.1. 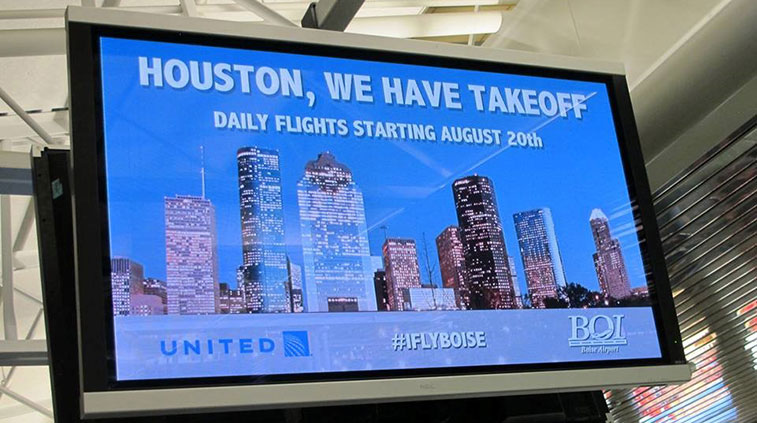