Eurowings set to take on NIKI at Vienna; anna.aero predicts focus on Spanish routes for two based A320s 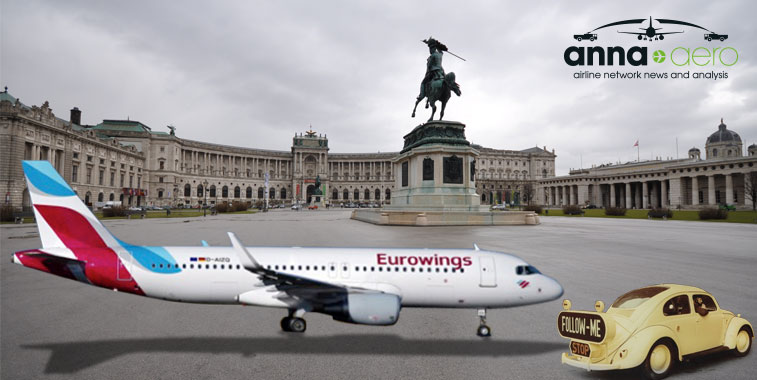 The withdrawal of the last remaining SWISS services from Basel at the end of May (to Barcelona, Hamburg, London City, Palma de Mallorca and Prague) was widely interpreted as meaning that the Swiss/French airport would become the first Eurowings base outside of Germany as Lufthansa rebrands and expands its low-cost footprint. However, Lufthansa has now revealed that Vienna will instead become the first continental Eurowings base, starting this autumn with the basing of just two A320s at the Austrian capital city airport. It seems that Lufthansa has thought better of taking on easyJet at its fifth busiest base (only London Gatwick, Milan Malpensa, Geneva and London Luton are bigger) and instead opted for a battle with airberlin subsidiary NIKI.

This summer, NIKI is adding four new leisure destinations to its Vienna network with the introduction of flights to Alicante (Spain), Athens (Greece), Catania (Italy) and Paphos (Cyprus). This brings its network from the Austrian capital to over 50 destinations for the first time. Of these, 11 are served with at least daily flights this summer. Of NIKI’s top 15 routes (by weekly departures) Austrian Airlines competes either directly or indirectly (in the case of Milan) on 11 of them. Other Star Alliance carriers (Aegean Airlines, Lufthansa and SWISS) provide further choice on three of the routes. 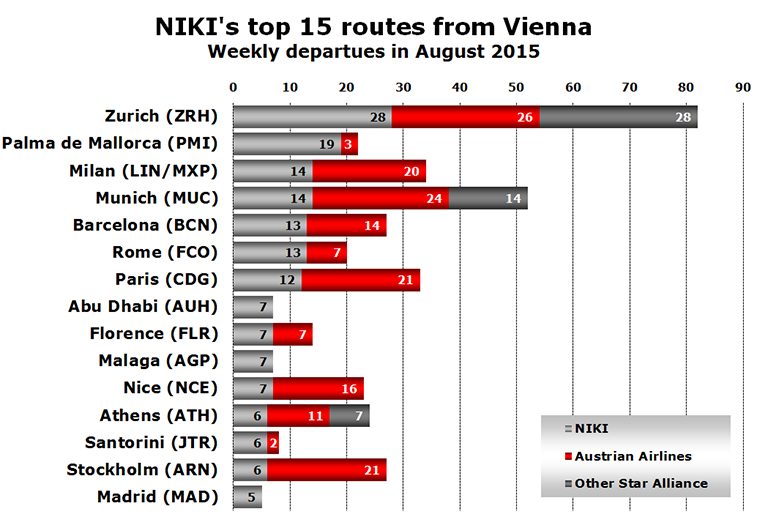 Apart from NIKI, other LCCs also serve the Vienna market. easyJet serves Geneva, London Gatwick and Rome Fiumicino, while Jet2.com serves a number of UK markets, though only its Manchester service is year-round. Norwegian only serves Oslo, while Vueling has flights from Barcelona, and starting in March, from Rome Fiumicino. Neither Ryanair nor Wizz Air are present at the airport, though Ryanair has a significant presence just 50 kilometres away at Bratislava Airport in Slovakia, which will become the carrier’s 71st base in March.

Looking at the current destinations (and frequencies) offered by Austrian anna.aero speculates that Spanish destinations such as Alicante, Madrid, Malaga and Palma de Mallorca may be targets for the new Eurowings operations at Vienna. However, with the base not starting until autumn, more seasonal routes such as Alicante and Malaga may be replaced by more year-round destinations. Barcelona and Rome would be obvious candidates replacing some or all of the Austrian capacity. Athens and Nice might be other existing destinations where capacity may be swopped to the lower-cost operation.