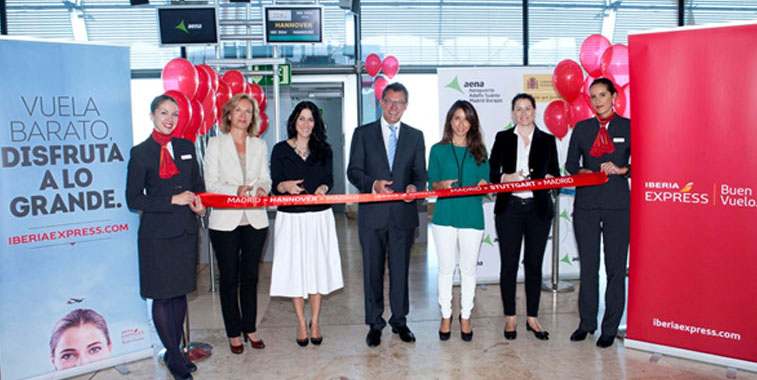 On 25 October 2014, Iberia (commanding 20% and 23% of seats and flights respectively in Spain) commenced thrice-weekly flights to Hannover, while the following day it introduced four weekly departures to Stuttgart. Both routes are flown from Madrid under the auspices of the airline’s Iberia Express brand. Cutting the ribbon in Madrid were: Ulrike Bohnet, Director, German National Tourist Board in Spain & Portugal; Mar de Miguel, CEO, Madrid Destino; Peter Tempel, Ambassador of the Federal Republic of Germany to the EU; Silvia Mosquera, Commercial Director, Iberia Express; and Elena Mayoral, Madrid Airport Director.

Located in the Iberian Peninsula, Spain is of the six Latin countries of Europe (the others being Portugal, France, Italy, Romania and Moldova), having an estimated population of over 46 million as of 2014. Along with France and Morocco, Spain is one of only three countries to have both Atlantic and Mediterranean coastlines. Therefore, its geographic position, popular coastlines, diverse landscapes and vibrant cultures has made the country’s international tourist industry among the largest in the world. In fact, tourism makes a significant contribution to Spain’s economy, adding 6.4% to its GDP.

With the air transport industry playing an important role in supporting Spanish tourism, the country is served by a total of 39 commercial airports providing scheduled airline services (according to OAG Analyser scheduled data for this March). Nonetheless, following the economic downturn that had a major impact on traffic flows to and from Spain in recent years, the country’s passenger numbers have decreased by 0.9% (measured in CAGR) since anna.aero last evaluated this country market eight years ago.

Examination of annual traffic data facilitated by AENA (the Spanish public body that owns and operates the majority of airports in Spain) reveals that Spanish traffic began to recover last year, as the country handled close to 196 million passengers, representing an increase of 4.1% when compared to 2013 figures. Interestingly, the country’s biggest gateways at Madrid and Barcelona, which accounted for 21% and 19% respectively of those passengers, both posted positive results, with the Catalan facility (+6.7%) outperforming the capital airport (+5.3%). 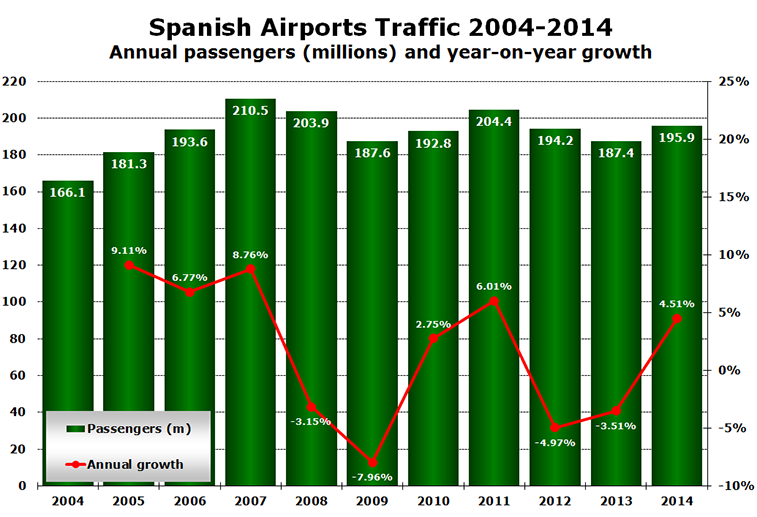 With regards to the traffic development between 2004 and 2014, the combined passengers of Spanish airports increased with an average annual growth rate (CAGR) of 1.5% over this timeframe. Spain handled around 196 million passengers in 2014, a number that increased from the 166 million recorded 11 years ago. This impressive growth has been driven primarily by low-cost carriers, including the likes of Vueling and Ryanair. Until 2008, Spanish airports had witnessed annual growth of between 6% and 9% for each year, but following the global economic recession, traffic volumes have delivered a fluctuating pattern. Nonetheless, after five years of unstable development and decline for both 2012 and 2013, it seems Spain’s airports have bounced back in 2014.

Iberia commands 20% and 23% of seats and flights

As of March 2015, Spain is served by a total of 56 airlines, with the flag carrier Iberia (along with its low-cost daughter company Iberia Express) maintaining its dominant position in this country market, as it controls 20% and 23% of seats and flights respectively. The oneworld carrier, which can trace its roots back to 1927, operates a total of 120 airport pairs, of which 66 are international links. In fact, the 1,246-kilometre sector from Madrid to London Heathrow is Iberia’s most frequently served international airport pair with 53 weekly departures, followed by the Madrid-Paris Orly sector with 42 weekly flights. On the other hand, the airline has a 31% share of weekly capacity in the Spanish domestic market, on which it competes aggressively with sister airline Vueling, as well as Air Europa. The flag carrier’s latest new route additions were introduced at the end of October 2014, when it commenced thrice-weekly operations to Hannover and four weekly flights to Stuttgart, both being flown from Madrid under the auspices of its Iberia Express brand. Also noteworthy, Iberia, Vueling, Ryanair and Air Europa, make up 57% of total capacity this month, with no other operator having more than 10% capacity share in Spain. 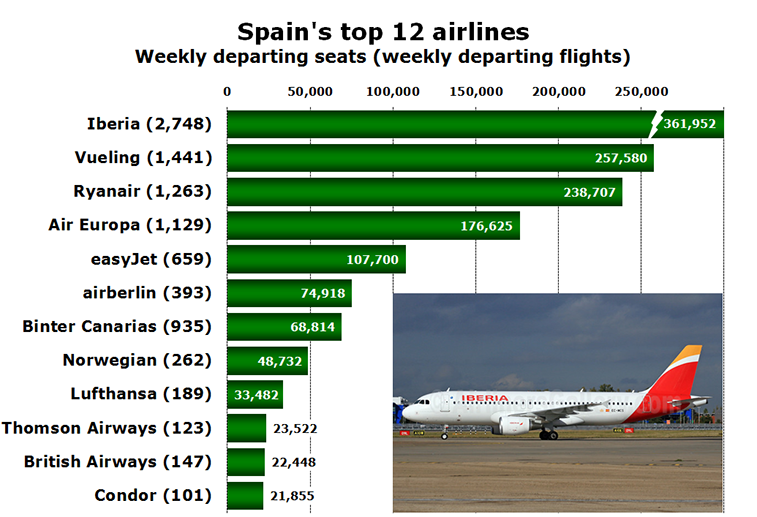 Total weekly seat capacity in Spain has gone up 5.2% with eight carriers recording growth, when comparing data from this March with the same week last year. The stand out performance is that emanating from Air Europa, which has increased its weekly capacity by an impressive 18% or 26,486 seats. Among its new routes that have been launched over the past 12 months, the SkyTeam member introduced on 27 November, its first Moroccan link from Madrid, with twice-weekly flights to Ouarzazate. This is also the airline’s second African route, the other being the 3,156-kilometre link from Madrid to Dakar in Senegal. By comparison, Thomson Airways noted an 11% capacity decline, followed by Lufthansa (with -9.7%) and airberlin (-8.6%). Lufthansa’s decline came as a result of the Star Alliance member having taken the decision to only operate intra-European routes from its Munich and Frankfurt hubs, while all other services have been transferred to its low-cost subsidiary, germanwings. As a consequence, Lufthansa’s subsidiary has seen its weekly capacity increase by 63% this March.

While a total of 71 countries can be reached non-stop from Spanish airports, the domestic sector is Spain’s biggest country market, representing 37% of all weekly seats according to OAG Analyser scheduled data for this March. At around 238,468 weekly seats, and 0.3% more than in the corresponding week last year, the UK remains the dominant international market, being served British Airways, Flybe, Norwegian, Ryanair, Iberia, Jet2.com, Thomas Cook Airlines, Thomson, easyJet, Air Europa, Vueling and Monarch Airlines with a combined 1,320 weekly departures from 26 points in Spain. 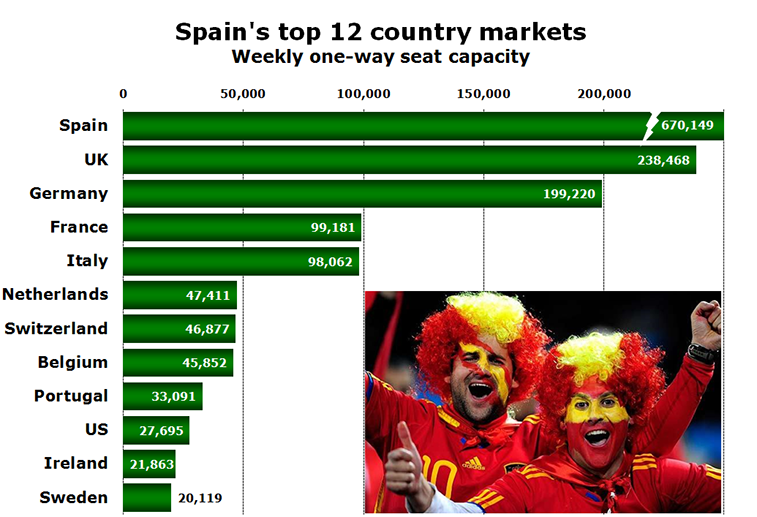 Netherlands has witnessed the most significant growth in weekly capacity, 45% or an additional 14,796 seats, due in part to transavia.com having expanded its operations by 117%. Iberia has also contributed to the increase, as it reintroduced flights on 1 July between Madrid and Amsterdam, flown by Iberia Express with twice-weekly departures. On the other hand, Belgium is the only country market of the top dozen that posted capacity decline (-4%), as a result of Thomas Cook (-50%), Vueling (-7.7%) and Ryanair (-2.2%) reducing their operations on this country pair.