Aberdeen Airport grows by 8.4% in 2014; Flybe is top airline in terms of weekly seats; steals crown from BA 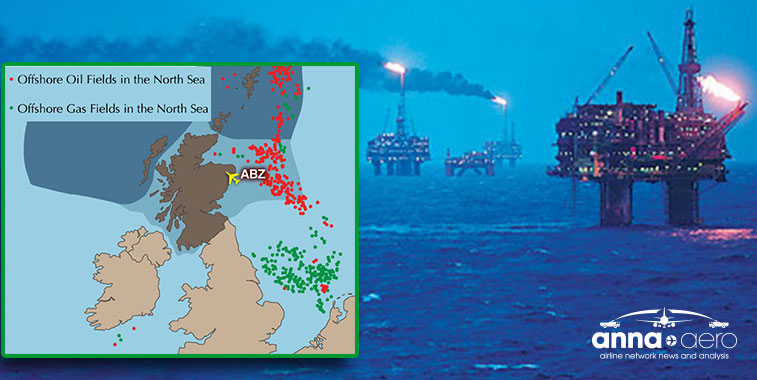 Aberdeen Airport is the gateway to Scotland’s energy economy, with many passengers leaping from aircraft to oil rig-bound helicopters at the airport. The Routes Europe 2015 host this coming April produced its best ever passenger results in 2014, inching closer to four million annual passengers.

Having delivered a 2014 annual passenger figure of 3.73 million (+8.4%), Aberdeen Airport is the UK’s 14th largest airport, nestled between Liverpool and London City airports, and the third largest in Scotland, behind Edinburgh and Glasgow. Along with its partners Aberdeen City and Shire, the airport will host this year’s Routes Europe event in April – widely anticipated to be the biggest regional event to date ‒ and it fully expects the route development conference to drive future growth. 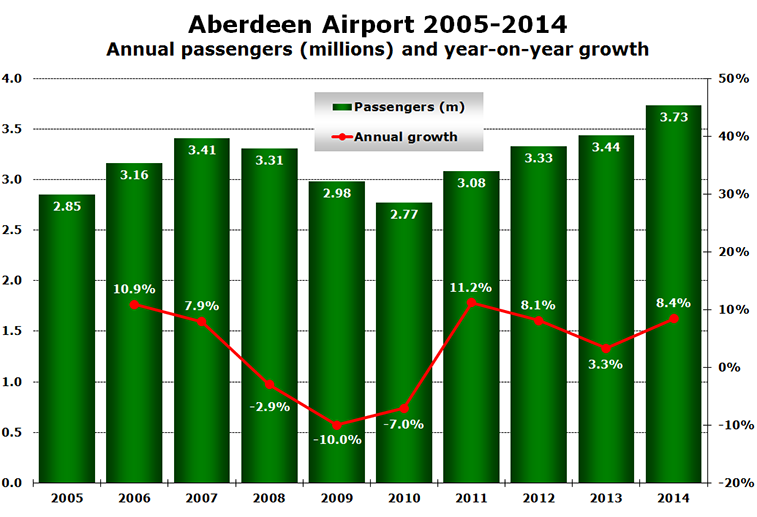 The airport suffered more than most from the negative impacts of the global recession, seeing three consecutive years of falling passenger traffic between 2008 and 2010. However since then, Aberdeen has bounced back strongly, delivering an average 7.8% growth per annum, versus a UK average of 3.1% over the last four years, culminating in its best ever traffic result in 2014. Charter traffic, which includes passengers using its helicopter movements to the oil and gas fields, as well as those on more traditional holiday flights, has remained remarkably consistent since 2005, varying between 21.8% of traffic (in 2007) at its lowest, and 24.4% at its highest (in 2011). To put this into context, in 2014 the figure was 24.1% of total traffic.

Entering Aberdeen’s monthly passenger data for 2014 into anna.aero’s Seasonal Variation in Demand (SVID) calculator, the airport performs very well, generating a score of 1.71 ‒ an ‘excellent’ rating. The airport’s seasonality performance declined marginally when compared to the result achieved in 2013, when it attained a score of 1.62, and it is also down on the 2012 result of 1.23 – however all three are still ‘excellent’ scores.

Evaluating Aberdeen alongside its most significant competing Scottish airports, our data elves also ran SVID calculations on Edinburgh (4.82 – ‘good’) and Glasgow, which also generated a ‘good’ result (5.56). While Aberdeen’s annual traffic profile does reflect those found typically in the northern hemisphere, where airports experience seasonal lows in January and February, the summer highs normally found across Europe in July and August do not occur in this part of Scotland, as October 2014 was the airport’s second busiest individual month last year (after July). This result is easily explained, as October will still capture some holiday traffic, albeit not as busy as July and August, alongside it being a robust month for business travel. The seasonal lows for the three airports represent 68% (ABZ), 53% (EDI) and 52% (GLA) of their respective seasonal highs.

Over the last 12 months, Flybe has ousted British Airways from the #1 spot in terms of weekly seats at Aberdeen. The toppling of the UK flag carrier since last March has been due largely to the former airline beginning its 18 times weekly Flybe Shuttle service, which operates Jersey–Southampton–Leeds Bradford-Aberdeen on 26 October 2014, as well as its London City airport pair, which started operations 12 times weekly on 27 October 2014. As a result, Flybe has grown its seat commitment by 59% year-on-year, with BA declining marginally by 1.8%. 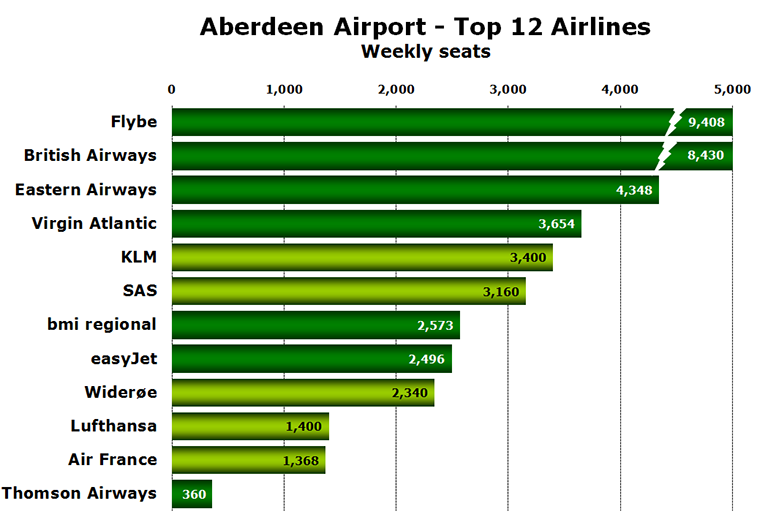 When comparing this March’s schedules to those from the same month last year, the number of weekly seats at Aberdeen has grown by 5.6%. The top 12 airlines command 99.4% of total weekly capacity, increasing slightly year-on-year from 99.1% in 2014. The airport’s limited portfolio of LCCs will be boosted on 19 June, when Wizz Air enters the Scottish market for the second time (it already flies to Glasgow from Gdansk, Katowice, Poznan and Warsaw – all twice-weekly), launching twice-weekly services from Gdansk. This arrival will also add to the airport’s international airline roll call, which presently boasts five overseas carriers (highlighted in light green).

Currently, Aberdeen’s top 12 routes features five international links (highlighted in light green), including the three connections to European mega hubs of Amsterdam (KLM), Frankfurt (Lufthansa) and Paris CDG (Air France), as well as Stavanger and Oslo in Norway. Indeed, the Norwegian capital city’s arrival in the top 12 was due in part to SAS launching it six times weekly service on 30 March, helping the city pair grow by nearly 200% in the last 12 months. However, it’s Leeds Bradford that has the accolade of being the fast growing airport inside the top 12, grew by 335% annually. 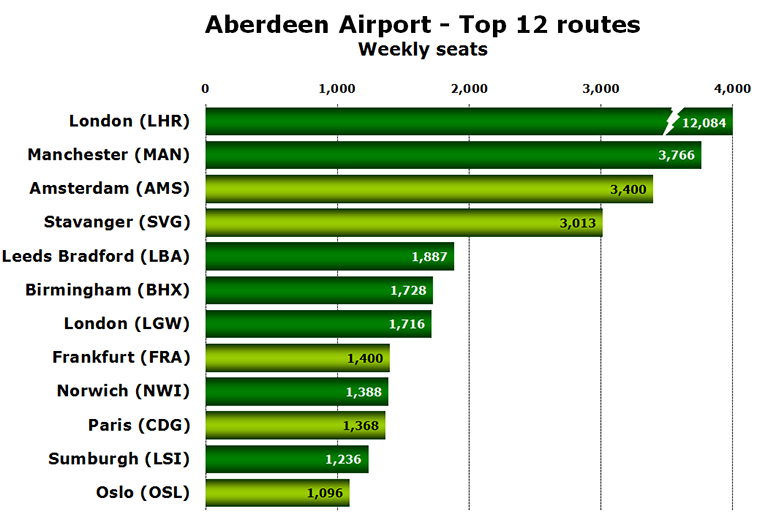 The #1 airport pair, between Aberdeen and London Heathrow, is not immune to growth, posting a 9.3% increase in seat capacity versus last March. However, Virgin Atlantic Airways’ decision to remove its Aer Lingus-operated domestic connection to its main London hub will undoubtedly have an impact on this sector’s figures, when the services are removed in September. Currently, BA has 70% of all seats, with Virgin making up the residual. Whether BA intends to take up any of the ‘spare’ capacity in the market, or simply milk the monopoly when Little Red exits in the autumn is unclear. According to OAG Analyser schedule data for the week commencing 1 October 2015, BA has 8,802 seats planned versus 8,614 for the same week last year – a marginal 2.2% increase in seats. 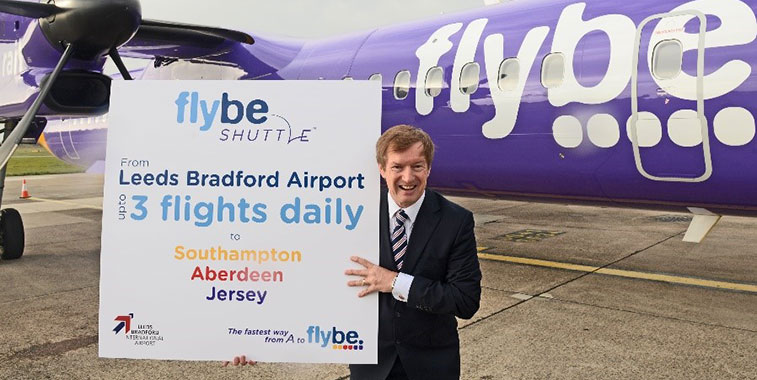 Last October, at the start of the winter season, Flybe launched multiple daily flights between Aberdeen and Leeds Bradford, with the aircraft continuing on to Southampton and Jersey. As a result Flybe is now the biggest operator by weekly seats at the Scottish airport.