Asia’s Top 15 airlines drop almost 300 routes in last 12 months but start over 550; AirAsia only one not to drop any routes The idea that airlines regularly review their route networks and occasionally drop routes is well understood, especially by followers of Europe’s extremely dynamic LCCs. However, it may come as more of a surprise to see how many routes the biggest airlines in Asia have dropped during the last 12 months, as well as how many they have started. anna.aero has identified the 15 biggest airlines operating from Asian airports (based on weekly seat capacity for the first week in March) and compared their schedules with those of the same week in 2014. According to this analysis these 15 airlines between them are now operating 566 routes that they were not operating last year, but have pulled out of 290 markets that they were operating last year. This means that for every route dropped these carriers typically start two new ones.

China Southern Airlines and China Eastern Airlines started (and dropped) more routes than any of the other carriers in the top 15. China Eastern was the more dynamic, dropping and starting more routes than its larger rival. In fact, these two carriers were responsible for over half of the route droppings among the top 15 airlines, while also being responsible for 40% of all the new services launched by these carriers. In net terms both airlines increased their route networks by just under 40 routes. 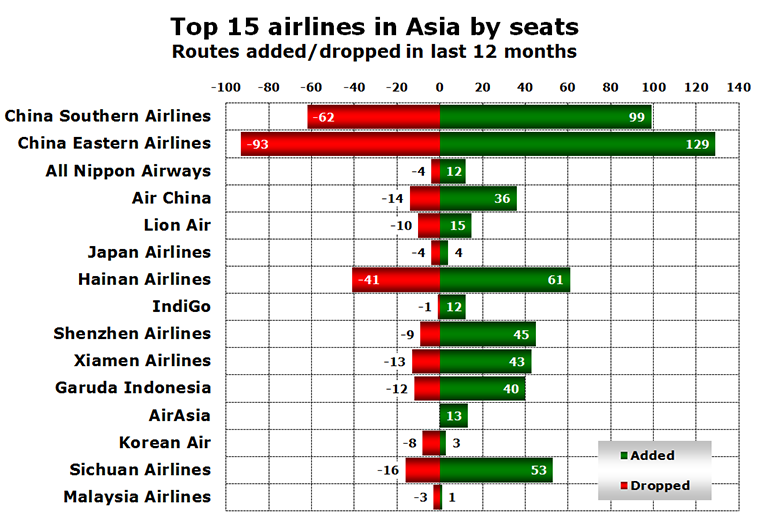 Hainan Airlines and Sichuan Airlines also both started at least 50 new services, with fellow Chinese carriers Shenzhen Airlines and Xiamen Airlines both starting over 40 new routes. Only two airlines, Korean Air and Malaysian Airlines dropped more routes than they started in the last 12 months, while Malaysia’s AirAsia was the only one of these leading carriers not to drop any routes.

A similar analysis among the region’s 15 busiest airports (by weekly seat capacity) revealed that these airports had welcomed 510 new services in the last 12 months, while losing 300. The airports with the biggest net gain in services were Shanghai Pudong (+56), Manila (+34) and Shenzhen (+31). According to our analysis of Innovata schedule data only Jakarta (-4) and Singapore (-11) have seen a net reduction on services offered by airlines, while Mumbai was unchanged and Delhi gained just one. 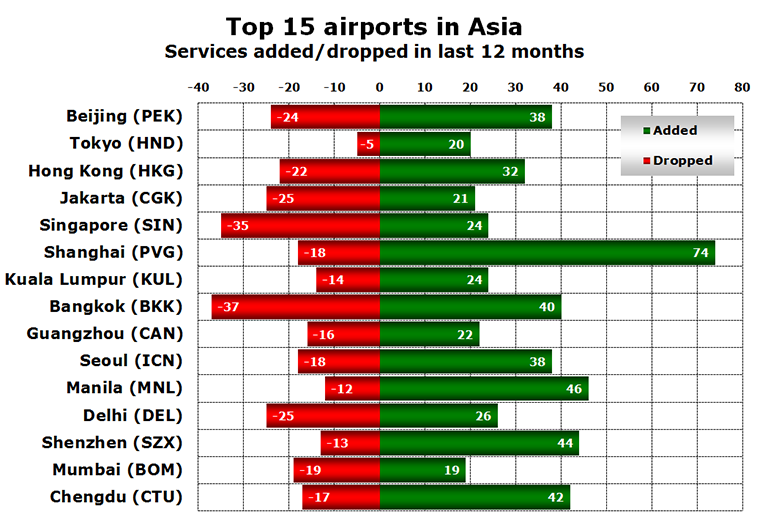