MEB3 carriers allocating around 6% of capacity to US routes; Emirates, Qatar Airways and Etihad Airways add eight new routes in 2014 US carriers have recently become rather vocal in their criticism of the major carriers in the Gulf region with apparent attempts to put pressure on the US government to restrict the Open Skies agreements that have prevailed for many years between the US and Qatar (home of Qatar Airways) and the UAE (home of Emirates and Etihad Airways). During 2014, the MEB3 airlines (Emirates, Etihad and Qatar Airways) launched a total of eight new routes to the US: Emirates launched flights from Dubai to Boston and Chicago; Qatar Airways from Doha to Dallas/Fort Worth, Miami and Philadelphia; and Etihad from Abu Dhabi to Dallas/Fort Worth, Los Angeles and San Francisco. However, analysis of schedule data for this summer (August) shows that if analysed on a region by region basis, the MEB3 carriers each allocate between 5% and 7% of their weekly seat capacity on routes to North America (US plus Canada).

Asia and Europe remain the leading regions for the services of these airlines, with all three carriers allocating roughly similar shares to each of the main regions, though Qatar Airways is relatively weak on services to Australasia, but strong on routes within the Middle East. 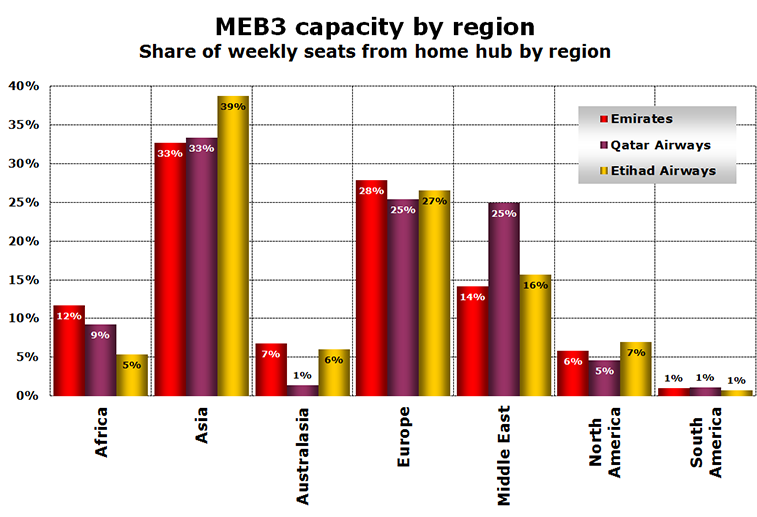 In terms of weekly seats flown this summer, Emirates is still 24% bigger than Qatar Airways and Etihad put together, thanks to its all widebody fleet and higher frequencies on many destinations. It offers more seats than either of its rivals in all seven geographic regions. 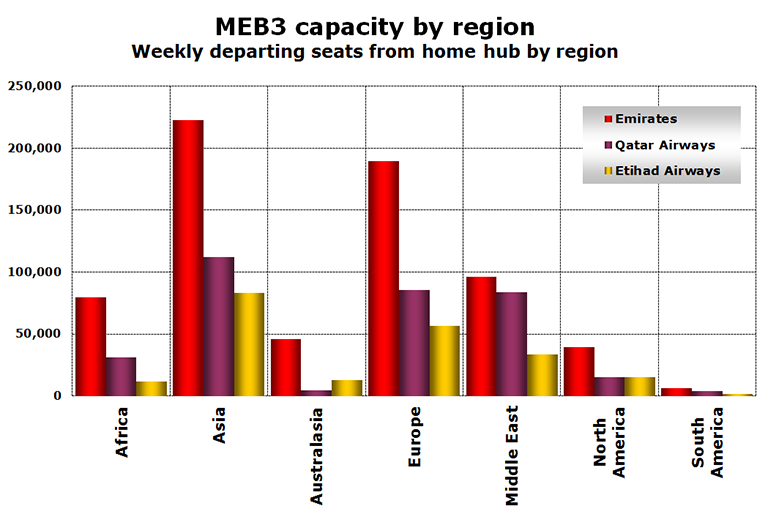 Analysis of weekly schedule data for August 2015 and August 2014 shows that all three carriers are increasing their network seat capacity; Emirates by 8.0%, Qatar Airways by 7.4% and Etihad by 13.5%. However, broken down at a regional level there are significant differences. Emirates and Etihad are both growing capacity in North America by over 20%, while Qatar Airways is growing that market by just 2%. Instead, the Doha-based carrier is growing in Europe by 26%, while Emirates is growing by just 9%. 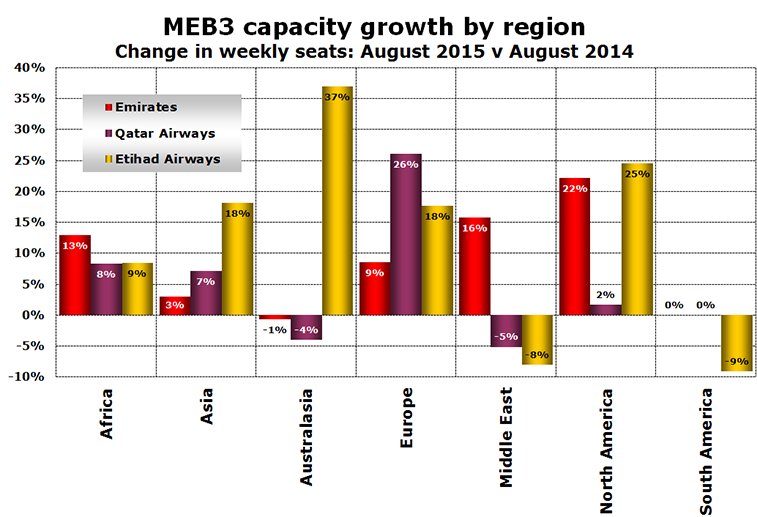 So far Emirates has not revealed plans to start any new routes in 2015, while Qatar Airways has announced Amsterdam and Durban as new points on its network this year. Etihad has already launched new flights to Kolkata this month, and plans to add Baku, Dar es Salaam, Edinburgh, Entebbe, Hong Kong, Madrid and Tbilisi before the end of the year.