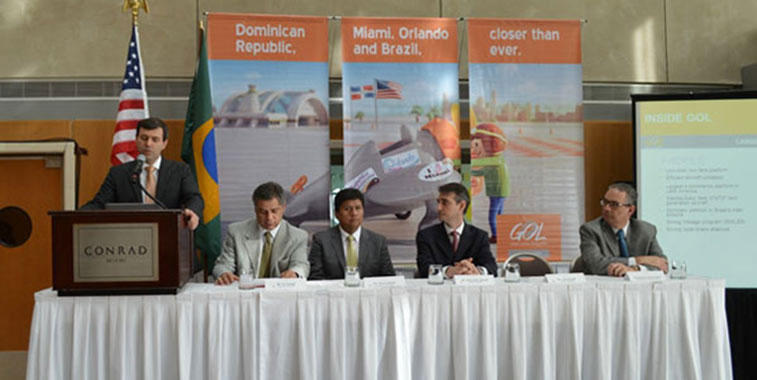 In December 2012, GOL (the second biggest carrier at Sao Paulo Guarulhos) announced its first US service from Guarulhos, namely the daily flights to Orlando that are operated via Punta Cana in the Dominican Republic. This route is still served this March, utilising the airline’s 177-seat 737-800s.

Having a population of 12 million (classified as the largest city in Brazil), Sao Paulo is served by three airports, Sao Paulo Guarulhos, Sao Paulo Congonhas and Sao Paulo Viracopos, which handled a combined total of close to 68 million passengers in 2014. Guarulhos, the busiest gateway in South America, contributed close to 40 million of those passengers and accounts for 16% of weekly seat capacity in Brazil this year, while Congonhas offers 9.7% of seats and Viracopos accounts for a market share of 4.7%. Furthermore, the airport serves as an operating base for Brazil’s two biggest carriers in terms of weekly seats – GOL and TAM Airlines.

Having been operated by a consortium composed of Invepar, Airports Company South Africa and Infraero since 2012, Guarulhos offers non-stop services to 91 destinations across 32 countries in the Americas, the Caribbean, Europe, Africa and the Middle East (according to Innovata scheduled data for this March). Interestingly, on 30 March 2014, the airport attracted a new carrier, as Sky Airline (the second largest operator in Chile) touched down with daily flights from Santiago. Following a yearly increase of 9.9% in passenger numbers last year, when compared to 2013 figures, Guarulhos posted a new record high close to 40 million passengers. By comparison, its fellow airport peers from the Sao Paulo area, Congonhas and Viracopos, posted more modest increases, of 6.5% and 5.9% respectively, according to anna.aero’s American Airport Traffic Trends database. 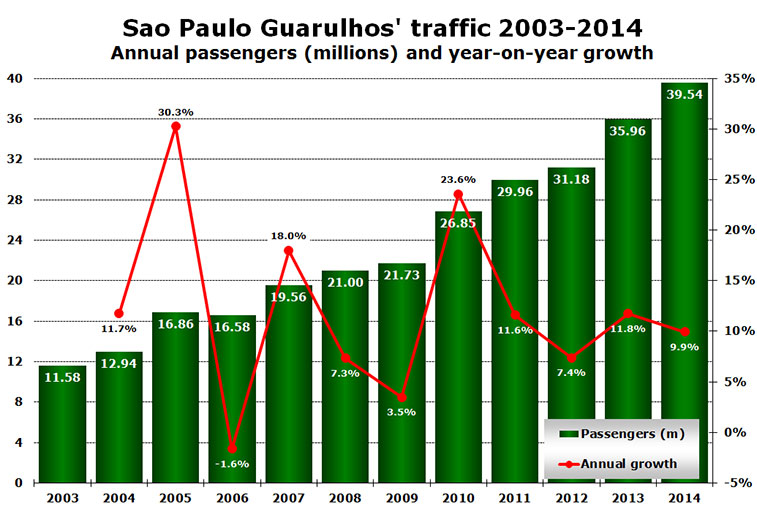 Brazil’s economic uncertainty resulted in traffic numbers at Guarulhos falling from almost 15 million in 1998 to 12 million in 2003. However, since then the economy has been much more stable and passenger numbers have grown visibly between 2003 and 2014, with an impressive average annual growth rate (CAGR) of 11% over this timeframe. The busiest gateway to Sao Paulo handled around 40 million passengers last year, a number that increased from the 12 million noted 12 years ago. The airport continued to grow even in the worst years of economic recession, experiencing a double-digit growth of 24% in 2010 when compared to the previous year.

Entering Guarulhos’ monthly passenger data for 2014 into anna.aero’s Seasonal Variation in Demand (SVID) calculator, the airport performs exceptionally well, producing a score of 0.45, an “excellent rating”. In fact, the airport seasonality performance has bettered when compared to the score recorded last year (0.74). With a total of 12 seasonality performance evaluations completed so far this year, Guarulhos has entered the rankings at the second position, but it has managed to beat the other three airports that have been analysed so far this year by anna.aero, namely London City (1.61 – excellent), Aberdeen (1.71 – excellent) and Rabat (1.98 – excellent).

To give Guarulhos a fair evaluation, we also ran calculations on Congonhas (0.96 – excellent) and Viracopos (0.34 – excellent). Against its airport peers from the Sao Paulo area, the airport performs better than the smaller Congonhas (18 million annual passengers), but worse than the city’s third busiest gateway at Viracopos (9.9 million). In addition, the seasonal lows for the three airports represent 82% (Guarulhos), 71% (Congonhas) as well as 82% (Viracopos) of their respective seasonal highs.

As of March 2015, a total of 40 airlines are serving Guarulhos, with TAM still being the market leader, even though it posted a modest increase of 0.6% when compared to the corresponding period of 2014. Classified as the second largest operator in Brazil, behind GOL, the airline commands 34% and 31% of all weekly seats and flights respectively and serves a total of 45 airport pairs from Guarulhos, of which Salvador is the most frequently flown destination, being served with 57 weekly departures. The oneworld member is closely followed by GOL (accounting for 28% of weekly capacity), which connects Guarulhos to 43 destinations this March. Over the past 12 months, Guarulhos has seen the arrival of Sky Airline, while both US Airways and BQB Airlines ceased their operations from Charlotte Douglas and Montevideo respectively. 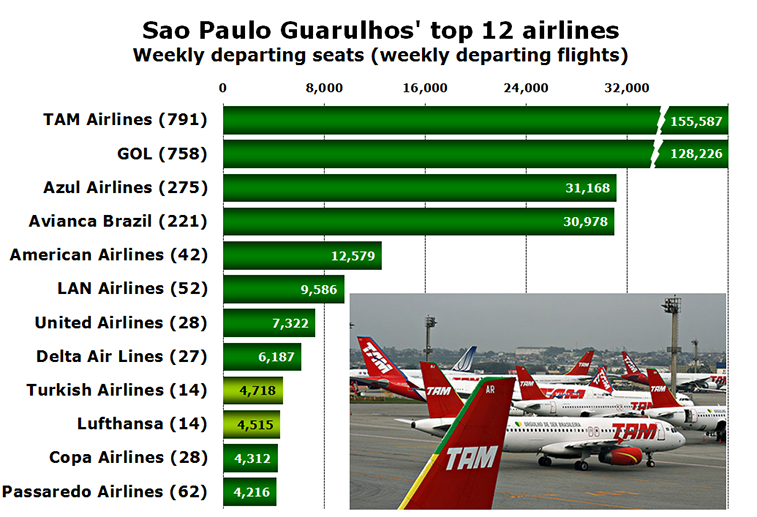 Total weekly seat capacity at Guarulhos has gone down 1.3%, with seven of the top dozen carriers recording growth, when comparing data from this March with the same week last year, while Copa Airlines saw its operations unchanged. Hence, Lufthansa is the fastest growing carrier at Guarulhos, posting a net annual growth in weekly capacity of 1,133 seats (+34%), coming as a result of increasing its frequency on the 9,836-kilometre airport pair from Munich from thrice-weekly to daily over the last 12 months. The Star Alliance member is also flying daily between Frankfurt and Guarulhos. By comparison Passaredo Airlines noted the greatest capacity decline (-29%), due to cancelling its domestic services to Dourados, Tres Lagoas and Uberaba. Interestingly, two European carriers (highlighted in bright green) have entered this year’s ranking, namely Lufthansa and Turkish Airlines, with the latter operating daily flights from Istanbul Atatürk to Buenos Aires Ezeiza via Guarulhos. 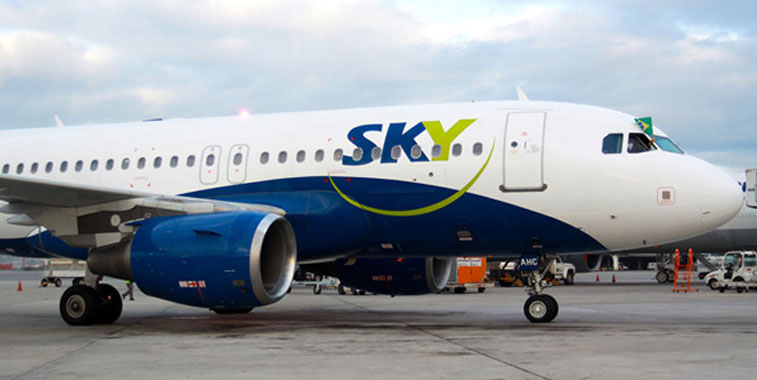 On 30 March 2014, Sao Paulo Guarulhos Airport attracted a new carrier, as Sky Airline (the second largest operator in Chile) touched down with daily flights from Santiago. Operating in competition with TAM Airlines and LAN Airlines, the carrier will serve the 2,617-kilometre sector using its A319s.