Record January for Airbus & Boeing; 76% of deliveries are single-aisles On 15 January, Qingdao Airlines took delivery of its fourth aircraft, with the addition of a brand new A320. The aircraft, which features a two-cabin layout with 158 seats including eight first class seats and 150 economy class seats, commenced operations on the Qingdao-Hangzhou-Fuzhou route from 17 January. By the end of the year, the airline’s fleet size is expected to reach nine units.

Following a busy December, both Airbus and Boeing delivered fewer aircraft this January. The combined deliveries of both producers for the first month of the year, was 86, of which 50 came from the American manufacturer, and 36 from the European one. Notably, Boeing enhanced its performance when compared to the same month last year, delivering five more units, while Airbus handed over three fewer airframes. For the fourth consecutive year, Boeing delivered more aircraft in the first month of the year than its European competitor, this time by five narrow-body and nine wide-body aircrafts. Overall 76% of all January deliveries involved narrow-body airframes. 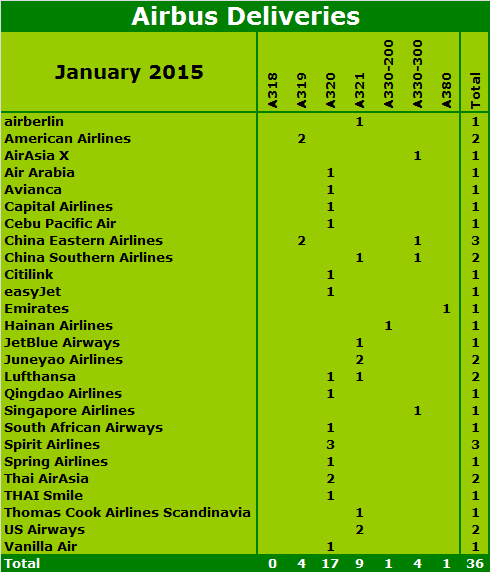 Airbus closed January with a total of 36 units delivered to airlines, which constitutes 39 fewer airframes than the amount delivered in December 2014, as well as three fewer than in the corresponding month last year.

Once again, single-aisle deliveries in January were led by the A320 (17 units), with a total of 30 single-aisle aircraft provided to carriers around the world. The US LCC Spirit Airlines was the only operator to incorporate more than two narrow-body units from Airbus into its fleet, as it received three A320s. Besides this, a total of six other carries saw two Airbus single-aisles join their respective fleets in January – American Airlines (two A319s), China Eastern Airlines (two A319s), Juneyao Airlines (two A321s), Lufthansa (one A320 and one A321), Thai AirAsia (two A320s), as well as US Airways (two A321s).

Looking at wide-body deliveries, Airbus handed over six airframes in January, representing 15 fewer units than in the preceding month, and four fewer than in the corresponding month of 2014. Following December’s delivery of five A380s, the European producer handed over a single unit of the type in the first month of 2015, to Emirates. Interestingly, Airbus delivered four A330-300s, one each to AirAsia X, China Eastern, China Southern Airlines and Singapore Airlines. On 24 January, Shandong Airlines took delivery of a new 737-800 at Jinan Airport, which is the first aircraft introduced by the airline in 2015. According to Shandong’s fleet expansion plan, there will be two more new aircraft to be delivered in early February. With the addition of three new aircraft, Shandong Airlines plans to resume the Yantai-Harbin route, and increase frequency on two existing routes. 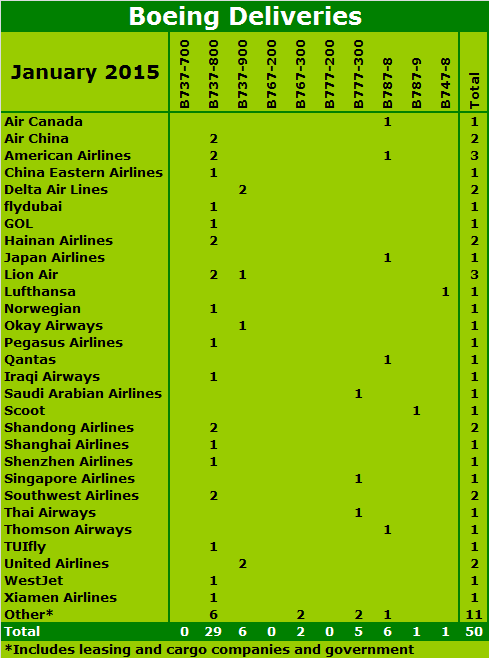 Boeing ended January with a total of 50 units delivered, 26 fewer than in December 2014, but five more than in the corresponding month last year.

A total of 15 wide-body airframes were delivered by Boeing in January 2015, 16 fewer units than in December 2014. Moreover, Boeing bettered its year-on-year performance, delivering five more wide-body units than the 10 it managed in the corresponding month of 2014. Following six and 15 787-8s delivered to airlines in November and December 2014 respectively, Boeing handed over six units of the type reaching customers in the first month of 2015. Interestingly, Scoot – the Singapore-based long-haul LCC – received one 787-9.