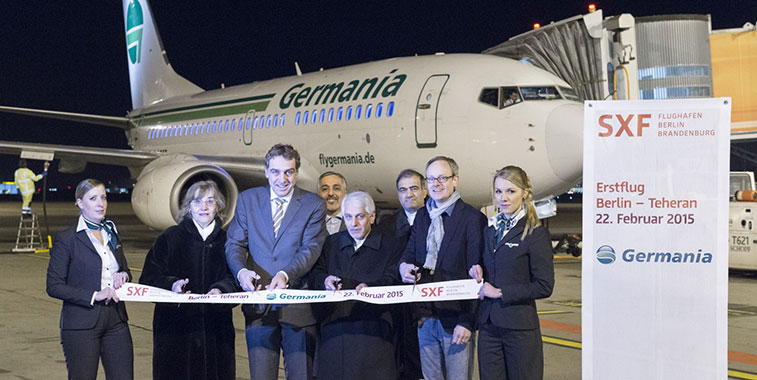 Having a population of 8.3 million, the capital city of Iran – Tehran – is served by two airports, Tehran Imam Khomeini Airport (IKA) and Tehran Mehrabad Airport (THR), with the former now being the main international gateway to the largest city in Western Asia. IKA was initially designed to replace Mehrabad. Nonetheless, after IKA’s opening in May 2004, it was not until the end of 2007 that the plan to move the majority of international flights to the new airport was completed. Currently the airport has one passenger terminal, with a total annual handling capacity of 6.5 million passengers and 120,000 tonnes of cargo; however, a second terminal “The Pilgrimage” is currently under construction. Offering 26% of all weekly seats in Iran, IKA is the biggest airport in the country in terms of weekly capacity, while Mehrabad is the busiest facility with regards to weekly departures (27% market share), when compared to the main international gateway (18%).

Operated by the Iranian Airports Holding Company, IKA offers non-stop flights to 46 destinations in 30 countries across Europe, the Middle East and Asia (according to Innovata schedule data for this March). By comparison, its airport peer at Mehrabad provides services to 28 domestic points, Baghdad and Al Najaf in Iraq and Kiev Boryspil in Ukraine. In addition, IKA serves as an operating base for Iran Air, Mahan Air and Iran Aseman Airlines. 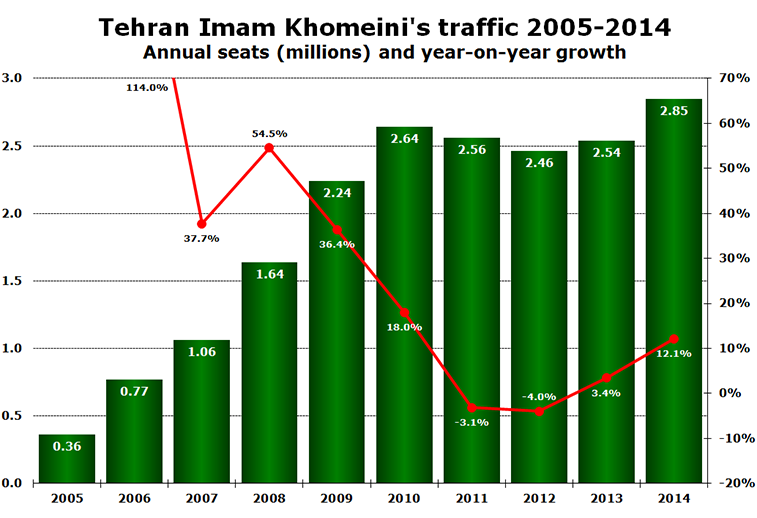 Analysis of Innovata annual scheduled data indicates that IKA’s capacity has grown impressively during the 2005-2014 timeframe, with an average annual growth rate of 23% over this period. Following a period of rapid growth peaking in 2010 at 2.6 million seats, the airport’s capacity posted two consecutive years of decline in 2011 (-3.1%) and 2012 (-4%). However, IKA has consolidated its annual capacity after 2012, reaching around 2.9 million seats last year (a new record high), representing an increase of 690% when compared to 2005.

Mahan Air is still dominant carrier with 26% of seats

While a total of 25 carriers operate from IKA, the top 12 airlines command 91% of weekly seats this March, which is down 4% when compared to the corresponding week of 2014. On the other hand, no more than six airlines are operating from Mehrabad. Mahan Air is still the biggest carrier at the airport, as it accounts for 26% and 25% of weekly seats and flights respectively and operates to a total of 14 international destinations from IKA, of which the 1,196-kilometre sector to Dubai is the most frequently served airport pair with 25 weekly departures. Offering 15% of seats at the airport, the flag carrier Iran Air (#2 carrier) links IKA to 22 destinations. Interestingly, four European carriers (highlighted in bright green) have entered this year’s ranking, namely Turkish Airlines, Lufthansa, Pegasus Airlines and Atlasjet. 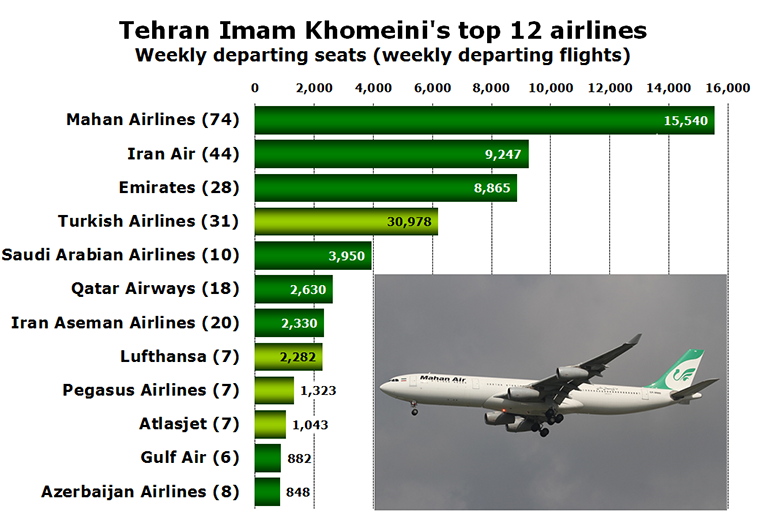 Total weekly seat capacity at IKA has gone up 18%, with seven of the top dozen carriers recording growth, when comparing data from this March with the same week last year, while Lufthansa, Pegasus and Atlasjet saw their operations unchanged. Moreover, Germania landed for the first time at the airport with twice-weekly flights from Düsseldorf and Berlin Schönefeld on 20 and 22 February respectively, using its 148-seat 737-700s. Besides this, IKA has seen the arrival of Saudi Arabian Airlines, Austrian Airlines, flydubai and Ukraine International Airlines over the past 12 months, while Kam Air has ceased its operations to Mazar-i-Sharif in Afghanistan. Turkish is the fastest growing carrier at IKA, posting a net annual increase in weekly capacity of 1,450 weekly seats, coming as a result of increasing its frequency on the 2,045-kilometre sector from Istanbul Atatürk by three weekly flights to 24 times weekly. By comparison, Iran Air is the only carrier that provided capacity decline (-9.1%).

Dubai is top destination in 2015

Following a double-digit increase of 18%, Dubai is still the top destination served from IKA in 2015, accounting for a market share of 26%. The most populous city in the UAE is served with a combined 67 weekly departures by Emirates, Iran Aseman, flydubai, Iran Air and Mahan Air. Ranking second with a market share of 17%, Istanbul’s main gateway has seen its operations grow by 1,191 weekly capacity or 13%. This sector is flown by five airlines, namely Iran Aseman, Iran Air, Atlasjet, Turkish and Mahan Air. Nevertheless, the 793-kilometre airport pair to Yerevan saw 233% increase in seats year-on-year, courtesy of Mahan Air having introduced thrice-weekly flights to Yerevan on 1 June 2014. On the other hand, Kuala Lumpur (-52%), Bangkok Suvarnabhumi (-17%) and Istanbul Sabiha Gökçen (-11%) are the only cities of the top dozen that have witnessed capacity fall this March. 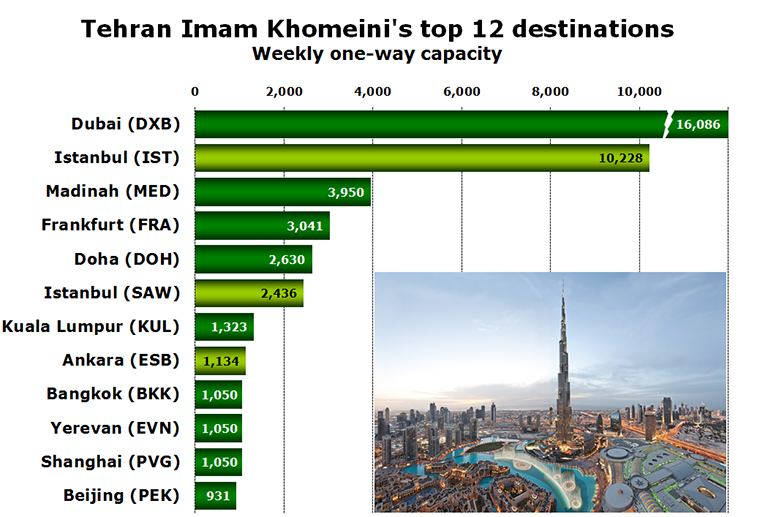 Overall, the top 12 destinations represent 74% of the total market, which is slightly down from the 76% recorded for the same week 12 months ago. Notably, Turkey is served through three airports from IKA, namely Atatürk, Sabiha Gökçen and Ankara (highlighted in bright green), with a combined 75 weekly flights. In addition, Madinah is a new entrant into this year’s ranking, as a result of Saudia commencing 10 weekly flights utilising a mixed fleet of its 747-400s, A320s, and A300-600s. Over 100 VIP guests including high ranking officials from the Armenian Civil Aviation, Yerevan Airport and travel trade professionals were on hand to celebrate the opening of Mahan Air’s new route between Tehran Imam Khomeini and Yerevan on 1 June 2014. The first inbound flight operated with a 100% load factor.