All Nippon Airways reaches 50 million passenger mark (again); added Düsseldorf, Hanoi and Vancouver to network in 2014; Houston and KL in 2015 All Nippon Airways made Düsseldorf one of three new international destinations served in 2014 with the introduction of daily flights from Tokyo Narita at the end of March 2014. This became the airline’s third route to Germany, as it already serves Frankfurt (twice-daily) and Munich (daily).

Star Alliance member All Nippon Airways (ANA) carried just under 50 million passengers in 2014, an increase of 3.3% on its performance in 2013. While the total number of passengers transported is still not quite at the level achieved back in 2006 and 2007, the number of passengers carried on international flights did set a new record for the airline of 6.94 million, up almost 11%. This marks the third time in the last five years that international passenger numbers have grown by more than 10%. International passengers now account for 14% of the airline’s total traffic, up from 9% in 2006. 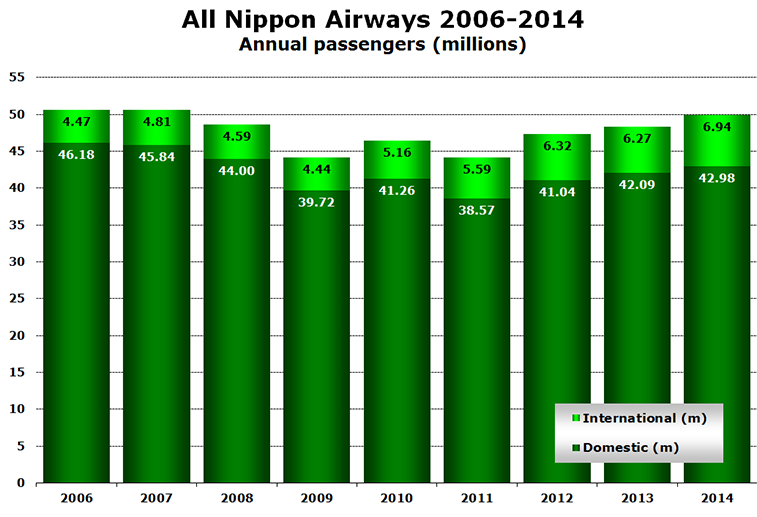 In recent years, ANA has also ventured into the low-cost carrier market. In March 2012 Peach Aviation began domestic flights from Osaka Kansai. This airline is a joint venture between ANA and the Hong Kong based First Eastern Investment Group. Since then the airline’s network has grown to 17 routes, 14 of which are from Osaka Kansai, and are a mix of domestic and international. In addition, in August 2012 its joint venture with AirAsia, named AirAsia Japan, launched domestic flights from Tokyo Narita. International routes were added before the end of the year, but the partnership failed to gel and ANA took over the business and re-branded it as Vanilla Air in late 2013. This summer the airline will operate just six routes from Tokyo Narita, three in Japan, plus Hong Kong, Kaohsiung and Taipei Taoyuan.

Over 200 flights per week between Tokyo and Sapporo 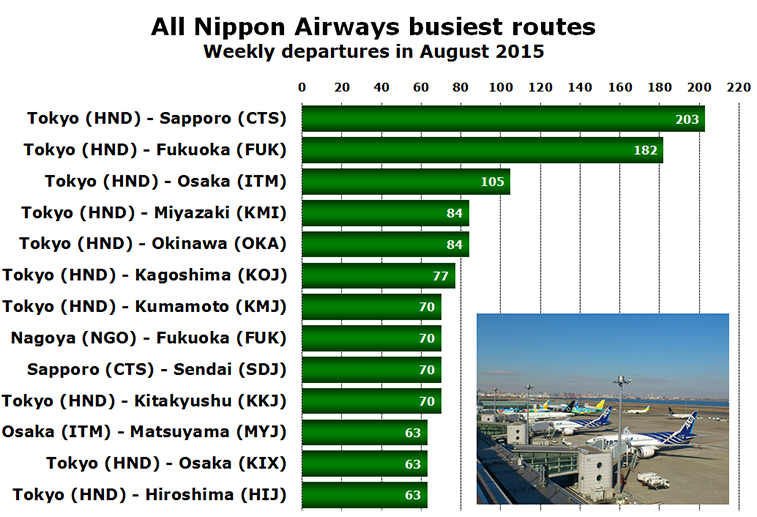 Of the airline’s top 13 routes, all of which are served with at least nine daily flights, 10 involve Tokyo Haneda airport. The three non-Tokyo routes involve six different airports. The airline’s most recent additions to its domestic network were two new routes to Aomori from Osaka Itami and Sapporo, operated on the airline’s behalf by its fully-owned regional subsidiary ANA Wings (IATA code EH) using Q400s. Both of these new services began in July 2014.

US routes dominate international rankings as measured by ASKs

The biggest changes in ANA’s international network occurred at the beginning of the summer 2014 season when additional slots became available at Tokyo Haneda for international services. While maintaining international flights from Tokyo Narita to Jakarta, Manila and Paris CDG, ANA also launched flights to these destinations from Tokyo Haneda. London Heathrow and Munich services were shifted completely from Narita to Haneda while the airline launched all-new services to Hanoi and Vancouver from Haneda. In addition, ANA also added Düsseldorf to its network with the introduction of daily flights from Narita using its 787s. In terms of ASKs (Available Seat Kilometres) ANA’s biggest international route is to New York JFK, which it serves twice-daily. 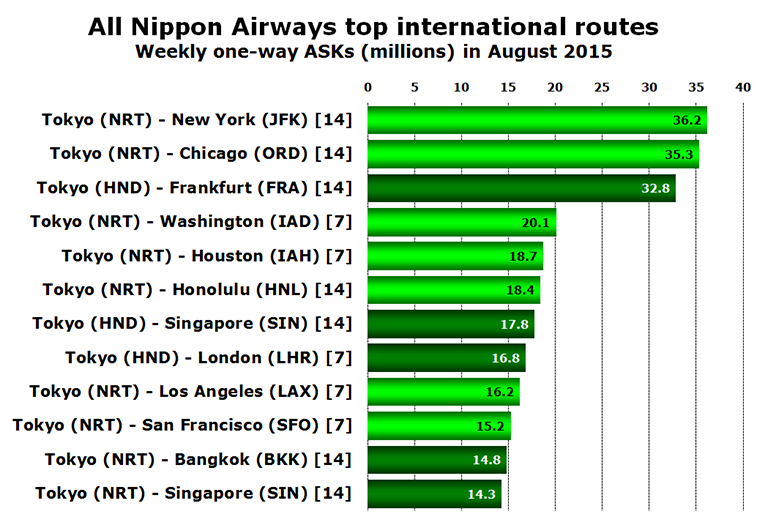 Of the airline’s top 12 international routes as measured by ASKs, seven are to destinations in the US (shown in bright green), with the twice-daily Frankfurt service being the biggest non-US route. The above data is for August 2015 which means that the airline’s planned new Houston service is included. Another new international destinations, Kuala Lumpur, will join the airline’s network in September 2015. 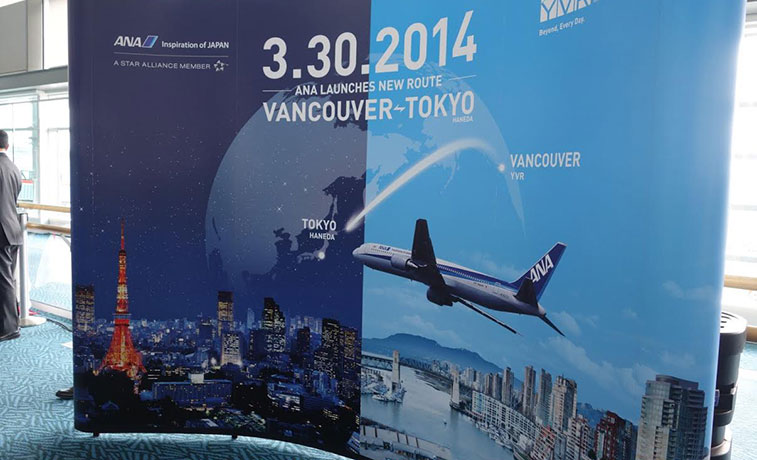