Athens Airport recovers in 2014 with 21% growth thanks to Aegean Airlines and Ryanair; Blue Air, Finnair, NIKI and Volotea new for 2015 Athens International Airport saw passenger numbers surge by over 21% last year (to 15.2 million), ending a run of six successive years of declining demand. Growth of around 9% in 2015 would see the airport record its busiest ever year, beating the previous record of 16.5 million set in 2007. Analysis of schedule data for this summer suggests that seat capacity is up around 15%, so 17 million passengers may even be feasible. Despite the ups and downs of traffic demand, the split between domestic traffic and international traffic has remained virtually unchanged at 35:65 since the new airport serving the Greek capital opened in March 2001. 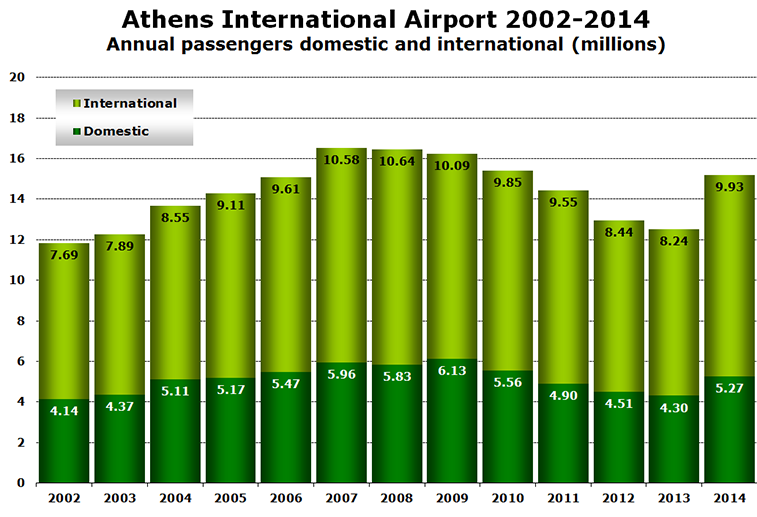 Aegean Airlines and Ryanair give major boost to S14 traffic

Traffic numbers really started picking up at the start of the 2014 summer season when Aegean Airlines launched a number of new routes and Ryanair made the airport one of two Greek bases launched last summer (the other being Thessaloniki). Unusually for the Irish ULCC it introduced just six routes, but all of them were started with at least daily flights. The airline’s service to Thessaloniki was even launched with five daily flights, a possibly unprecedented occurrence in the airline’s history.

As a result of last summer’s route expansion the airport’s SVID score deteriorated from 8.22 in 2013 to 9.77 in 2014. Demand peaks in August while the quietest month is February, with August traffic around 150% higher than the February figure. This year has got off to a flyer with January traffic up almost 28% compared with January 2014. 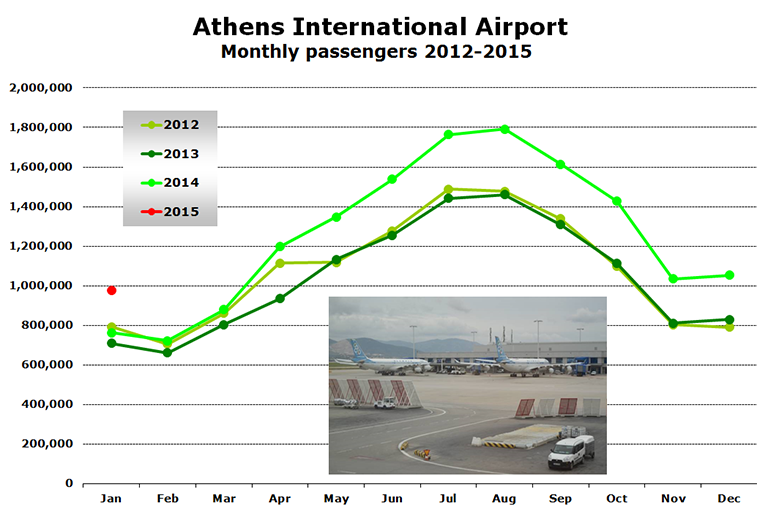 Analysis of schedule data for scheduled airlines shows that Aegean Airlines has a 46.3% share of summer seat capacity, which, when combined with subsidiary Olympic Air’s 3.6%, gives the carrier control of almost exactly half of all scheduled seat capacity at Athens Airport. This summer, Ryanair’s share of the market will rise to just over 10%, three times more than the next biggest non-Greek airline Lufthansa, with 3.4%. 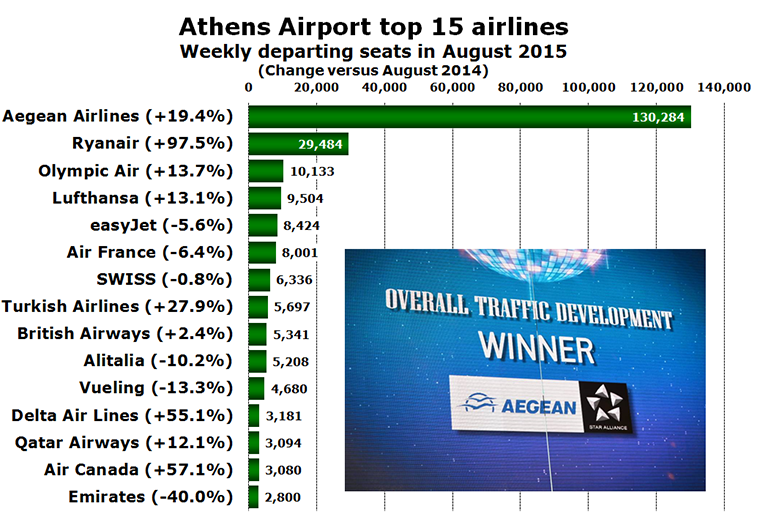 Almost 60 scheduled airlines will serve the Greek capital this summer, though since last summer the airport has seen the disappearance of Italy’s Air One (closed down by Alitalia) and Cyprus Airways, while LOT Polish Airlines has apparently withdrawn its Warsaw service.

New airlines for this summer include Volotea (with four routes to Italy and one domestic Greek route) and Blue Air, which has stepped in to replace Cyprus Airways on the Larnaca route. Other new airlines for 2015 include Finnair (starting Helsinki service from April) and NIKI (starting Vienna flights from April), as well as the return of Czech Airlines with Prague flights.

Over 120 destinations served non-stop in summer

Compared with last summer an additional 13 destinations will be served non-stop from Athens this summer by scheduled carriers. These are: Bratislava, Brussels Charleroi, Rome Ciampino and Warsaw Modlin (all served by Ryanair); Pisa (served by Aegean Airlines and Volotea); Bari and Palermo (served by Volotea); and Bordeaux, Preveza, Riyadh, Sharm El-Sheikh, Tallinn and Tehran (all served by Aegean Airlines).

Six of the airline’s top 10 routes this summer based on flight frequencies are to domestic Greek destinations (shown in dark green). The leading foreign destinations based on this criteria are Paris, Rome, Larnaca and London. Of the top 15 routes are two are served by a single carrier. 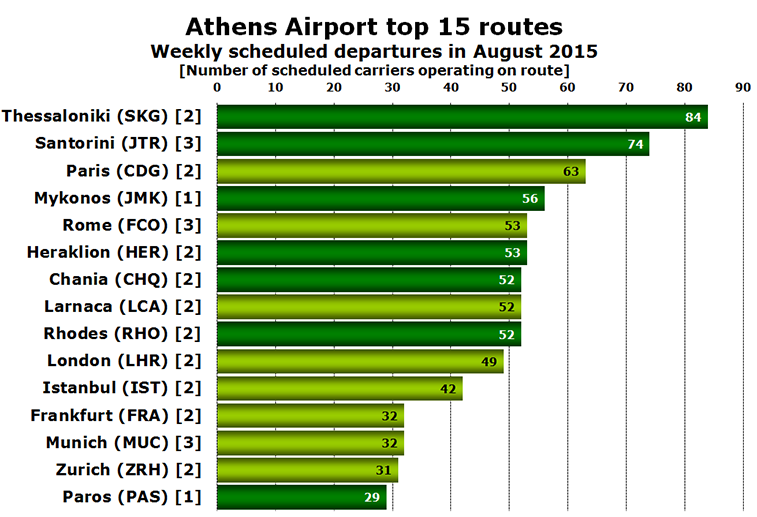 During the summer there are only five genuine long-haul destinations served: Montreal and Toronto in Canada (both served by Air Canada and Air Transat); New York JFK served by Delta Air Lines; Philadelphia served by American Airlines; and Singapore, served by Singapore Airlines. The three big Gulf hubs of Abu Dhabi, Doha and Dubai are all served, but flights to Doha from Athens are only 100 kilometres longer than easyJet’s flights from Edinburgh in Scotland.

Last year neither US service was year-round, leaving passengers wishing to travel between the US and Greece with a variety of alternative one-stop options. According to OAG Traffic Analyser data for 2014 for passengers travelling between the US and Athens the leading connecting airports were London Heathrow and Frankfurt, followed by Paris and Zurich. For passengers travelling between Asia and Athens, Doha is the leading connecting airport with 34% of the market followed by Dubai (18%), Abu Dhabi (17%) and Istanbul (13%). These four hubs account for over 82% of indirect traffic between Athens and Asia. Athens is famous for many things including the Acropolis and the Olympics. Having hosted the summer Olympics in both 1896 and 2004 (as well as the Intercalated Games of 2006), Athens is blessed with two Olympic stadia. Our Chief Analyst was lucky enough to be given privileged access to the 2004 stadium to admire the engineering and architectural artistry of Santiago Calatrava’s impressive roof, as well as the arched Agora Walkway close to the stadium. Calatrava was also responsible for a distinctive downtown bridge in Athens.