Bern baby Bern! On 14 January bmi regional revealed that it would be launching three new feeder routes for Lufthansa at Munich, starting at the end of March. Bern in Switzerland, Liege in Belgium and Rotterdam in the Netherlands would each be served with multiple daily flights using the airline’s fleet of 18 small Embraer jets. bmi regional’s network has grown in total by just one route this summer (from 18 to 19), but that disguises the fact that seven routes have been dropped while eight have been added.

Since bmi regional re-launched itself as an independent airline at the start of the W12/13 season, it has not been afraid to take tough decisions regarding its route network. If services have failed to deliver a satisfactory financial return the airline has been unafraid to drop them. As a result, according to anna.aero’s analysis of the airline’s schedules for the last 30 months, it has operated or put on sale a total of 43 routes, of which just 19 will be flown this summer.

Among the routes no longer served this summer are the airline’s last remaining routes from both Birmingham (to Gothenburg, ending 27 March 2015) and Manchester (to Aberdeen, ending 27 March 2015). At one point bmi regional served Billund, Lyon and Toulouse from Birmingham, while its Manchester services previously included Antwerp, Edinburgh and Lyon. The Berlin-Kalmar and Gothenburg-Stavanger routes ended earlier this week on 1 March.

19 routes for S15; top 6 all from either Bristol or Munich 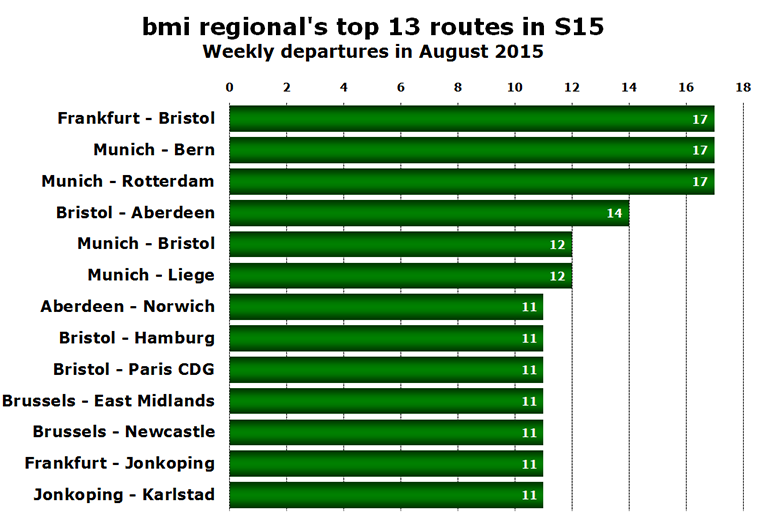 According to the airline’s website its current fleet comprises four 37-seat Embraer ERJ-135s, and 14 49-seat Embraer ERJ-145s. Assuming the airline did not have a fuel hedging strategy in place, it will be very happy with the recent drop in fuel prices which will considerably help its financial position. According to the latest UK CAA statistics bmi regional transported 37,177 passengers in November 2014 at a load factor of 56.8%. Of these 25,840 were on scheduled services (at a load factor of 52.0%), highlighting that the airline operates a significant number of non-scheduled services.