Far from being a stagnant mature market, the US-Asia region pair is still providing dynamic growth in 2015. Analysis of Innovata scheduled data for this March reveals that flights between the US and Asia have experienced an increase of 4.3%, with around 1,272 weekly flights now being operated between the two countries. Total weekly departing seats have grown at a faster rate, having over the last year increased by 5.9%, with ASKs up 7.6% to 3.1 billion this March.

The top dozen airport pairs represent around 36% of all weekly seats provided between the US and Asia, which is slightly down from the 37% recorded for the corresponding week last year. The 6,144-kilometre sector between Honolulu and Tokyo Narita has managed to maintain its top position in 2015, even though weekly capacity on the route has declined by 9.1%. A total of six airlines are serving this city pair this March, the same number recorded for the same week last year. Japan Airlines is the dominant operator serving this route, accounting for 31% of weekly seats, followed by Delta Air Lines (25%) and China Airlines (13%). Other airlines to operate on this route are Korean Air, United Airlines and All Nippon Airways (ANA). Interestingly, Korean Air and China Airlines serve this airport pair as part of their daily flights from Seoul Incheon to Honolulu and from Taipei Taoyuan to Honolulu respectively. Two new entrants have entered this year’s ranking, namely the 10,411-kilometre sector from San Francisco to Taoyuan and the New York JFK-Incheon route at 11,098 kilometres, which posted double-digit growth of 40% and 12% respectively. 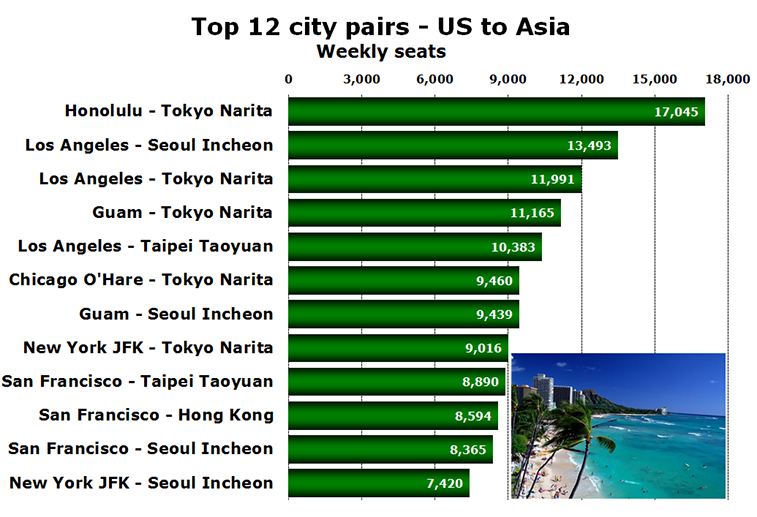 In fact, seven out of the top dozen city pairs posted growth, when comparing data from this March with the same week last year. The stand out performance is that emanating from the San Francisco-Taoyuan city pair, which noted a yearly increase of 40%. The addition of around 2,500 weekly seats on the route was due primarily to United, as it resumed daily flights on the 10,411-kilometre sector to Taipei’s main airport on 29 March, after it was last served in August 2008. Furthermore, EVA Air has introduced an additional two weekly departures on the sector. Services between Los Angeles and Narita provided the greatest capacity decline (-12%), as a result of Malaysia Airlines having ceased its four weekly flights.

USB3 carriers have 38% of weekly seats

According to Innovata scheduled data for week commencing 3 March 2015, seat capacity between the two markets is up 5.9% this month, following the introduction of a raft of new routes that have been added in recent months, including Hawaiian Airlines’ thrice-weekly flights from Honolulu to Beijing on 16 April 2014. Surprisingly, 10 of the top dozen carriers serving this market pair have noted capacity increases, with China Airlines down (9.7%) and Asiana Airlines has seen its operations unchanged. The US Big three carriers (USB3 – American Airlines, Delta, United) account for 38% of all weekly seats, which represents the same share as in the corresponding week last year. Moreover, a total of five Chinese carriers are flying between the US and Asia this March, namely Air China, China Eastern Airlines, China Southern Airlines, Hainan Airlines and Sichuan Airlines, accounting for 31% of weekly capacity. Interestingly, two LCCs are present here as well, South Korea’s Jin Air and Jeju Air. 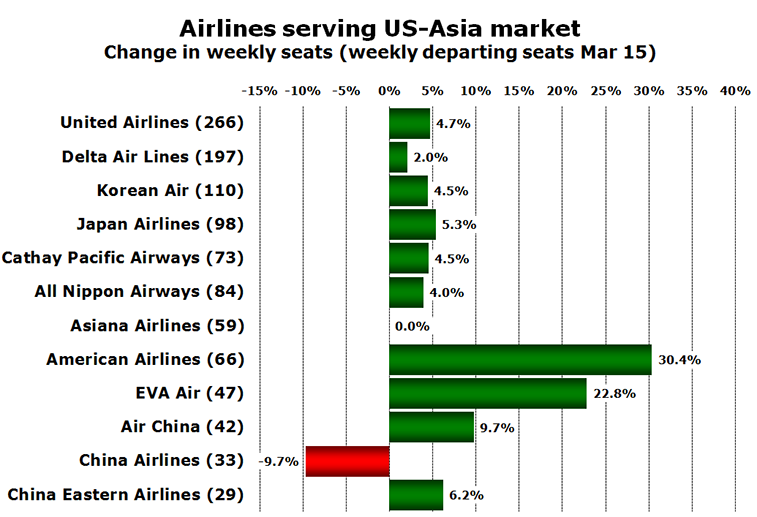 American, commanding 4.8% of weekly capacity, is the fastest growing carrier, with an annual growth in weekly seats of 30%, as a result of expanding its long-haul network from Dallas/Fort Worth on 11 June with daily flights to Hong Kong and Shanghai Pudong. China Airlines posted a 9.7% decline by offering 1,204 fewer weekly seats.

Los Angeles dominates with 18% of seats

Examination of Innovata weekly scheduled data for this March reveals that a total of 21 US airports are offering non-stop flights to Asia. Los Angeles is the largest origin point for Asian traffic, with around 18% of weekly capacity. Out of its nine Asian destinations, Narita is the most frequently served airport with a combined total of 42 weekly flights from American, Delta, Japan Airlines, ANA, Singapore Airlines and United.