Berlin Schönefeld receives Cake of the Week award for Germania 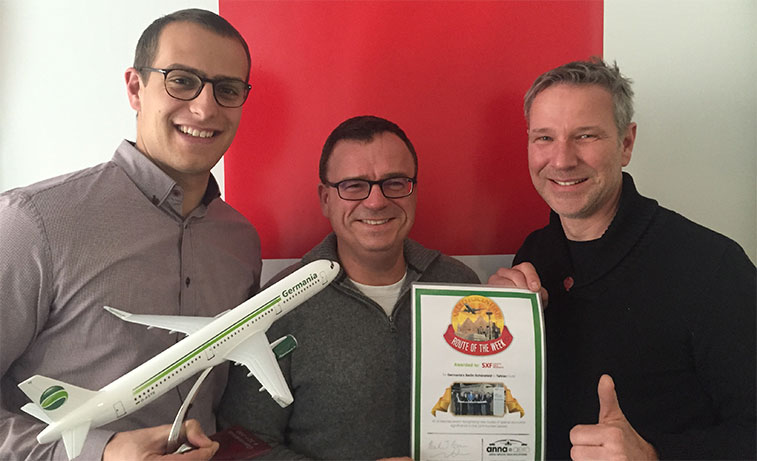 On 24 February, Akron/Canton Airport celebrated the announcement of Allegiant Air’s new routes to Myrtle Beach (starting June 3), Savannah (May 21), and St. Pete-Clearwater (May 21) with a special ceremony in the terminal, including a fantastic cake. The three routes will be operated twice-weekly, using the ULCC’s MD-83s. On 25 February, Thai AirAsia announced expanding its domestic network with a new flight from Bangkok Don Mueang to Buriram, a sector that will commence on 2 April. Santisuk Klongchaiya, Director of Commercial, Thai AirAsia, pointed out that since the start of 2015 AirAsia has been consistently adding domestic flights to strengthen its network of connections. Don Mueang-Buriram is the fourth addition since the beginning of the year after AirAsia began flights to the three provinces of Nan, Loei and Roi Et simultaneously and saw their strong response, as evidenced by constantly high advanced bookings. Celebrating the announcement are: Wanchalerm Yingyong; Kayne Vincent; Santisuk Klongchaiya, Director of Commercial for Thai AirAsia; Anupharp Thirarath Deputy Governor for Domestic Marketing of The Tourism Authority of Thailand; Anawin Jujeen; and Naruphol Ar-romsawa.