Covering an area of 130,375 square kilometres (around the same size as Greece), Nicaragua is the largest country in the Central American isthmus, bordering Honduras to the north and Costa Rica to the south. Inhabited by approximately six million people, the country was conquered by the Spanish Empire in the 16th century and remained so until it achieved independence from Spain in 1821. Following its independence, the country has undergone periods of political unrest, dictatorship, and fiscal crisis, the most notable causes that led to the Nicaraguan Revolution of the 1960s and 1970s. Nonetheless, by 2007, tourism had become the largest industry in Nicaragua, growing by 70%, with annual rates of between 10% and 16% starting from 2000, according to Euromonitor International. In fact, around 60,000 US citizens visit Nicaragua annually, primarily business people, tourists and those visiting relatives. Therefore, the air transport industry plays an important role in supporting the country’s tourism and economic growth.

Managua Airport (perhaps better known as Augusto César Sandino International Airport) is the main international gateway to Nicaragua, being also classified as the fifth busiest airport by passenger traffic in Central America. As of March 2015, Managua offers non-stop links to 12 destinations in eight countries, with Copa Airlines, which operates a focus city at the airport, commanding 30% of the traffic. 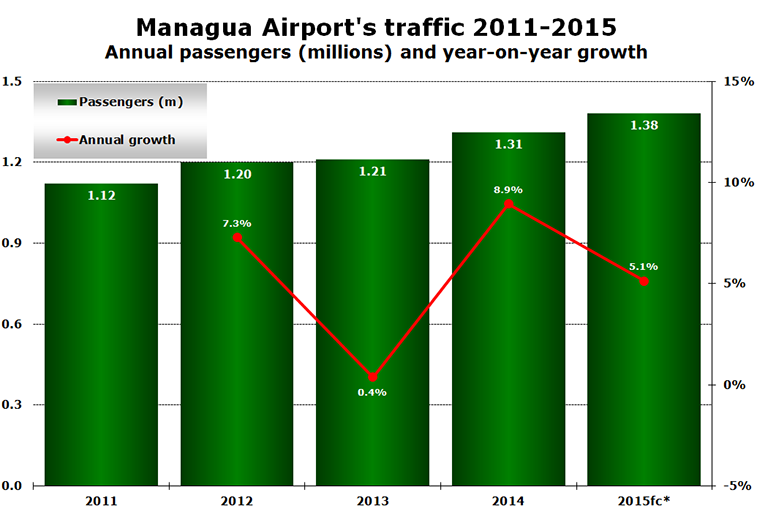 Examination of data facilitated by Empresa Administradora de Aeropuertos Internationales (EAAI), which is responsible for the administration of Managua along with four other regional airports, reveals that passenger traffic at Nicaragua’s main international gateway has been growing without interruption between 2011 and 2014, with an average annual growth rate (CAGR) of 4.1% over this timeframe. The airport handled around 1.3 million passengers last year (a new record high), growing by 8.9% over 2013 figures, due in part to the addition of an array of new destinations: Los Angeles on 15 June (Delta Air Lines); Dallas/Fort Worth on 6 June (American Airlines); Houston Intercontinental on 15 May (Spirit Airlines); and Mexico City (Aeromexico) on 10 December. Furthermore, following an average annual growth rate (CAGR) of 5.1% for passenger numbers recorded for the first month of each year starting from 2011 to 2015 (for which traffic data is already available), Managua is expected to continue its growth this year, handling close to 1.4 million passengers, according to anna.aero forecasts.

As of March 2015, Nicaragua is served by a total of 11 airlines, with Copa – the flag carrier of Panama – being the dominant player in this country market, as it commands 27% and 30% of seats and flights respectively. The Star Alliance member operates three airport pairs from Managua, to Panama City in Panama, San Jose in Costa Rica and Guatemala City in Guatemala, with the former being its most frequently served destination with thrice-daily departures. Ranking second with a weekly seat share of 20%, American Airlines connects Managua to Miami and Dallas/Fort Worth, with the latter sector having been added on 6 June 2014. 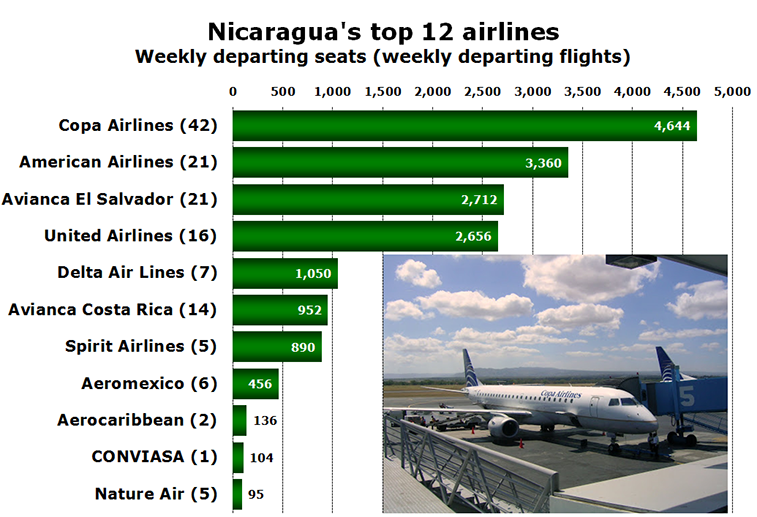 Total weekly seat capacity in Nicaragua has gone up 28%, with eight carriers recording growth, when comparing data from March with the same week last year, while CONVIASA saw its operations unchanged. In fact, Nicaragua has seen the arrival of a new carrier, Aeromexico, which touched down with six weekly flights from Mexico City on 10 December using its E170s. The US LCC Spirit Airlines is the fastest growing carrier, with a net increase of 534 weekly seats or 150% over the last 12 months. The airline has added three further weekly departures on the 1,666-kilometre sector from Managua to Fort Lauderdale. Interestingly, only Nature Air noted capacity decline (-29%), due to reducing its frequency on the 320-kilometre route to San Jose by two weekly departures.

US is still top country market

A total of eight country markets can be reached non-stop from Nicaragua according to Innovata scheduled data for this March. At around 8,976 weekly seats and 26% more than in the corresponding week last year, the US still tops the list of country markets served, with a combined total of 56 weekly flights operated by American, Delta, Spirit, Avianca El Salvador and United Airlines from Managua. 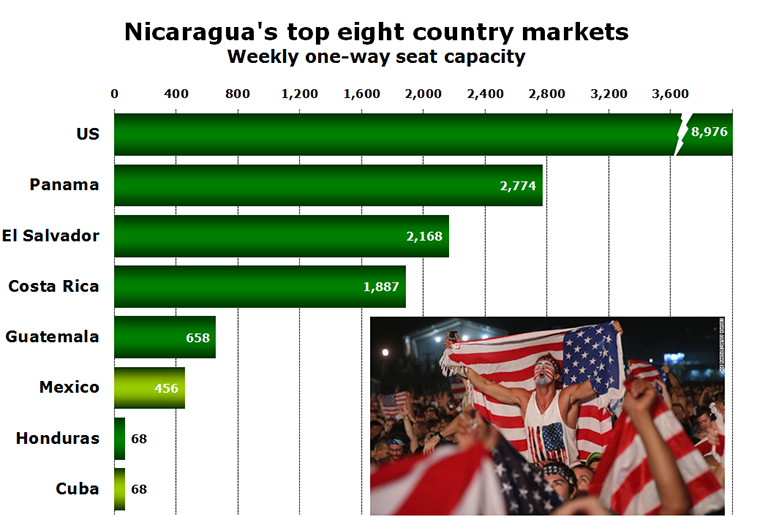 Panama has seen the most significant growth in weekly capacity, 40%, or an additional 794 seats, followed by this year’s top position and El Salvador (+22%). Noteworthy is the fact that in the last 12 months, two new country markets have entered this year’s ranking, namely Mexico and Cuba (highlighted in bright green). While Aeromexico arrived from Mexico City, Aerocaribbean introduced weekly flights from Havana in Cuba.

Construction of the Nicaragua Canal commenced on 22 December 2014 and it is expected to be completed by 2019. The shipping route will connect the Caribbean Sea with the Pacific Ocean using the San Juan River as an access route to Lake Nicaragua. Hong Kong Nicaragua Canal Development Investment Company (HKND Group) is the main investor that will manage and build the canal. Therefore, a new airport – Rivas Airport – will be built by 2018, which EAAI highly expects to offer a daily service to Asia.