Ryanair makes Berlin base 73 and adds 16 routes for W15/16; going head-to-head with easyJet on over half of all new routes 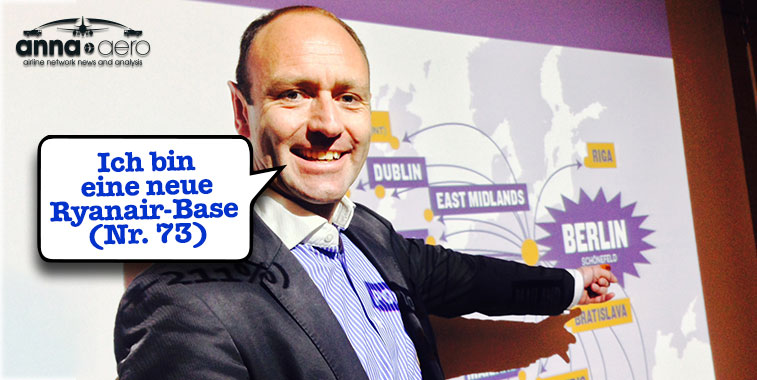 Ryanair’s Chief Marketing Officer Kenny Jacobs announces Berlin Schönefeld as Ryanair’s 73rd base, starting in late October 2015. Five 737-800s will be based there operating a total of 22 routes. Ryanair already serves Berlin from six of its European bases, with new services to Madrid and Palermo starting soon. The remaining 14 routes will commence this winter.

Ryanair announced on Thursday 5 March that it would be making Berlin Schönefeld Airport its 73rd base from the end of October, coinciding with the start of the Winter 2015/2016 season. Five 737-800s will be based at the airport, operating 16 new routes, which will bring Ryanair’s offering from the airport up to 22. Ryanair first began serving Berlin in May 2003, when services were launched from London Stansted. This spring, the ULCC is serving Berlin from its bases in Dublin, East Midlands, London Stansted, Milan/Bergamo, Porto and Shannon. At the start S15, two more routes (to Madrid and Palermo) will bring the network up to eight routes. The remaining 14 routes will start later in the year. Ryanair has in the past served other airports from Berlin Schönefeld as shown in the following table.

Of these previously served routes, only one (Malaga) has made it back into the airline’s schedule for this winter. The 16 new routes Ryanair announced this week are:

Nine of the 16 routes are already served by easyJet, which also has a base at Berlin Schönefeld. This confirms that Ryanair is now definitely targeting easyJet’s passengers on bigger intra-European routes. According to the airline it will be operating 191 weekly flights at Berlin Schönefeld this winter, as there will also be frequency increases on the airline’s existing Dublin, London Stansted and Milan/Bergamo routes. As a result, Ryanair expects to carry around 2.6 million passengers per annum through the German capital. On the new multiple-daily flights to Brussels, Madrid and Rome, Ryanair will face the following competition:

**STOP PRESS** After this original story was written Ryanair announced that it would also start domestic operations between Berlin and Cologne Bonn. According to Ryanair’s on-line booking tool the service will commence on Sunday 25 October and will be operated five times daily Monday to Friday, with two flights on Saturday and three on Sunday. Based on the timings of the flights they would appear to be flown by Cologne Bonn based aircraft. There will be no direct competition on the route, but both airberlin and germanwings currently offer up to 10 daily flights between Cologne Bonn and Berlin Tegel.