Situated in the southeastern-central part of Europe, north of the Balkan region, Romania is one of the six Latin countries of the continent (the others being Spain, Portugal, Italy, France and Moldova), having an estimated population of around 20 million and being classified as the seventh most populous member of the European Union (EU). Since joining the EU at the beginning of 2007, the demand for air travel to and from Romania has increased considerably. Liberalisation of the market has enabled competition to flourish and helped the likes of Blue Air and Wizz Air to develop their local bases, while also allowing the likes of easyJet and Ryanair to enter this market.

Following a rapid economic growth in the 2000s, living standards have significantly improved in the country, with Romania becoming an upper-middle income country featuring a high Human Development Index. With the aviation sector playing an important role in supporting the country’s economic growth, Romania is currently served by a total of 12 commercial airports providing scheduled airline services (according to OAG Analyser scheduled data for this March), out of which Bucharest, Cluj-Napoca and Timisoara are the major gateways. Benefiting from an improving economic climate, the country’s three primary airports have grown their combined annual traffic by 132% since Romania joined the EU.

Examination of annual traffic data facilitated by anna.aero’s European Airport Traffic Trends database reveals that the three major Romanian airports handled a combined total of 10 million passengers in 2014, representing an increase of 8.5% when compared to 2013 figures. As a matter of fact both Bucharest and Cluj-Napoca reported growth of 8.9% and 14% respectively, while Timisoara (-2.6%) continued to decline as a result of Carpatair (which has been the main operator at the airport over recent years) having withdrawn its operations from the airport. 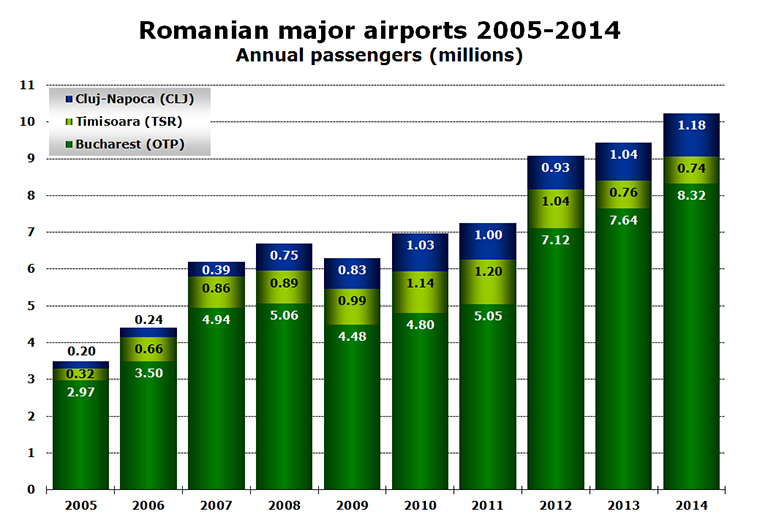 Overall, looking at traffic development between 2005 and 2014, the combined passengers of the three Romanian airports grew with an average annual growth rate (CAGR) of 11%, with Cluj-Napoca outperforming (+19%) its airport peers from the country. Bucharest posted an impressive increase of 41% in 2012, thanks to the capital’s other main airport, at Baneasa, closing to commercial airline traffic at the start of the S12 season. As a result, all operations by low-cost carriers Blue Air and Wizz Air (which had previously helped Bucharest Baneasa Airport to support almost 2.4 million annual passengers), were relocated to the main airport. Looking at Timisoara, traffic has visibly accelerated until 2011, achieving a massive increase of over 220% in 2011, when compared to 2005. Nonetheless, Carpatair’s operational rationalisation that commenced in 2011 had a major impact on traffic flows to and from the airport in recent years. As of March 2015, Timisoara is served by Wizz Air, TAROM and Lufthansa, with the former being by far the dominant carrier, commanding nearly half of weekly seat capacity.

As of March 2015, the top 12 carriers serving the Romanian market account for 92% and 93% of all weekly seats and flights respectively. While it was 2014’s #1 airline, TAROM’s 1.5% capacity decrease over the last 12 months has allowed ULCC Wizz Air to steal top-spot, following its impressive 42% growth, meaning it has become the largest airline operating from Romania, with a market share of 33%. In fact, the combined seat capacity of the two major carriers is around 59% this month. Wizz Air operates a total of 87 airport pairs from eight airports in Romania (Arad, Cluj-Napoca, Craiova, Iasi, Bucharest, Sibiu, Targu Mures and Timisoara), out of which the 2,113-kilometre sector from Bucharest to London Luton is the most frequently served route with 19 weekly departures. By comparison, the Romanian flag carrier operates 38 airport pairs, of which five are domestic routes. In fact, the Romanian domestic market has long been a virtual monopoly for TAROM, which connects Bucharest to Baia Mare, Cluj Napoca, Iasi, Satu Mare and Timisoara. 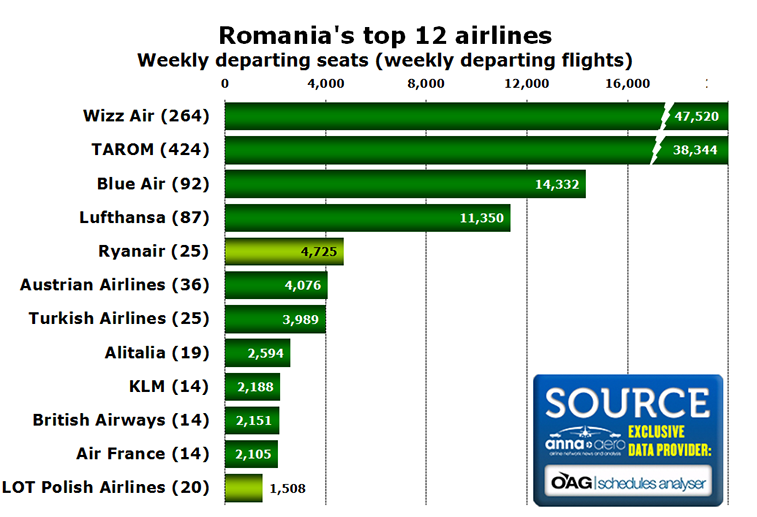 Total weekly seat capacity in Romania has gone up 17%, with eight of the top dozen carriers recording growth, when comparing data from this March with the same week last year. Ryanair is not only a new entrant into this year’s graph, but also the fastest growing carrier, with a net increase of 4,347 weekly seats or 1,150% over the last 12 months. Among its new routes launched from Bucharest over the past 12 months are twice-daily flights to London Stansted on 1 April, daily departures to Brussels Charleroi on 26 October and four weekly flights to Dublin. Classified as the second fastest growing airline in Romania with a yearly increase of 49%, LOT Polish Airlines increased its frequency on the Bucharest-Warsaw Chopin sector from 12 times weekly to 20 times weekly over the last 12 months. On the other hand, Austrian Airlines (-27%), Air France (-26%), KLM (-22%) and TAROM (-1.5%), all posted capacity decline.

When anna.aero last examined the Romanian country market in 2009, Italy was the leading country market. Six years later this is still the case, with Germany maintaining its second place ranking. A total of 31 countries can be reached non-stop from Romanian airports, according to OAG Analyser schedule data for this March. At around 28,500 weekly seats and 27% more than in the corresponding week last year, Italy is being served by Wizz Air, Blue Air, TAROM, Alitalia and Meridiana with a combined 178 weekly departures from Arad, Bacau, Cluj-Napoca, Craiova, Iasi, Bucharest, Targu Mures and Timisoara. Ranking fourth with a weekly seat share of 10%, the domestic market is served by TAROM and Blue Air, with the latter operating between Bucharest and Sibiu. 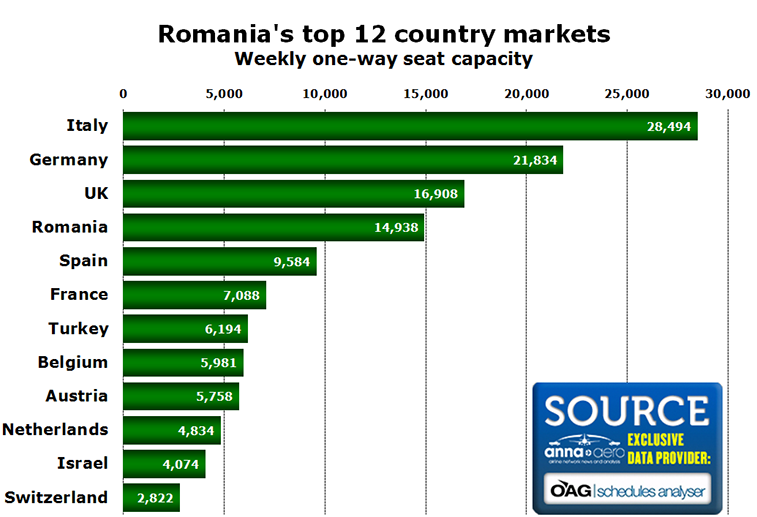 Belgium has witnessed the most significant growth in weekly capacity, 65% or an additional 2,345 seats, due in part to Ryanair adding daily flights between Bucharest and Charleroi. Nonetheless, Blue Air has also contributed to the increase, as it introduced twice-weekly flights from Bacau to Brussels. On the other hand, Austria posted the biggest capacity decline (-23%), as a result of Austrian (-10%) and TAROM (-13%) reducing their operations on the Bucharest-Vienna airport pair.

Wizz Air commenced its first flight from Craiova Airport on 13 May 2013, when it began twice-weekly operations on the 1,127-kilometre sector to Milan/Bergamo. Since then, the Hungarian ULCC added a further service to Luton on 29 October 2013 with twice-weekly flights, and opened its fifth Romanian base (#18 overall) on 23 July 2014, with a single aircraft deployed at the airport. As a result, the airline’s 180-seat A320 based at Craiova is operating to four additional destinations: two in Italy (Bologna and Rome Ciampino), one in Germany (Dortmund) and one in Spain (Barcelona). In fact, Wizz Air has not only added new routes from Craiova, but has also increased frequencies on the existing services to Luton and Milan/Bergamo from twice-weekly to thrice-weekly and from twice-weekly to four times weekly respectively.