By choosing Kempegowda International Airport Bengaluru as its first operating base last June, AirAsia India helped the airport move past Chennai Airport to become India’s third busiest, with 14.5 million passengers in 2014. The LCC’s network now comprises six destinations, but it has so far avoided joining the six other airlines serving the busiest Delhi and Mumbai markets.

Kempegowda International Airport Bengaluru recently overtook Chennai Airport to become India’s third busiest airport. During 2014 the airport handled just under 14.5 million passengers (up 13.2% over its 2013 total), helped in no small part by the decision of AirAsia India to make the airport its first base when services launched in June. Since 2002, passenger numbers have grown almost five-fold from just over three million to almost 15 million. The current airport was opened in 2008 on a greenfield site and is located around 40 kilometres from the centre of Bengaluru. At present there is just a single runway, but there is plenty of room for a second, which is likely to be constructed in the near future. 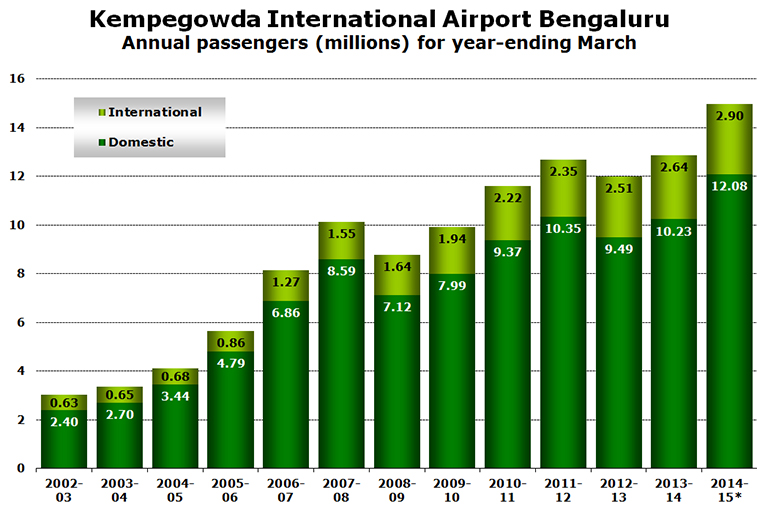 Most major Indian airports have relatively low seasonality and this is reflected in the airport’s SVID score in 2013 of just 0.44 (“excellent”). This increased in 2014 to 1.27 (still “excellent”) as a result of AirAsia India’s arrival half-way through the year. Its closest rival, Chennai Airport, also scores an impressively low 0.60. Double-digit growth was achieved every month from June onwards, while the last four months of 2014 saw year-on-year growth of over 20% as AirAsia India ramped up its frequencies. 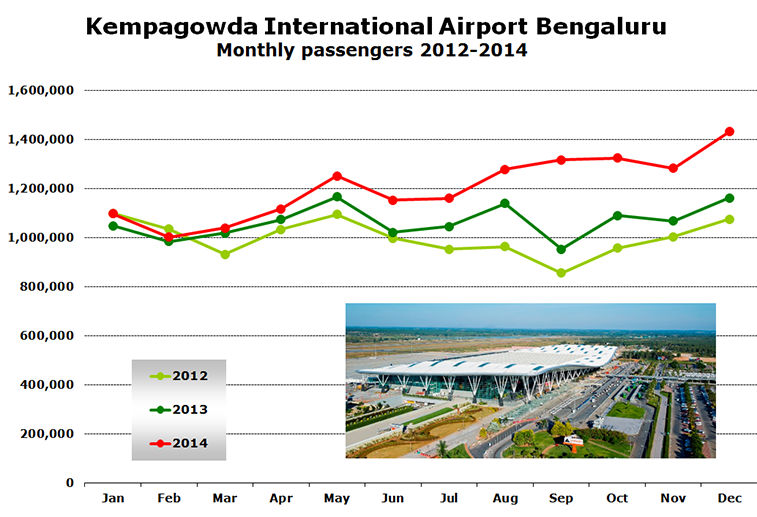 Measured by weekly seat capacity, IndiGo is the biggest airline serving Bengaluru (BLR) with over 72,000 weekly departing seats, equivalent to just over 400 weekly departing flights. These are spread across 16 destinations, all of which are served at least daily, and all are domestic with the notable exception of the airline’s recently launched daily service to Dubai. IndiGo accounts for around 35% of weekly seat capacity at the airport, which makes it twice as big as the next busiest airline, Jet Airways. AirAsia India is already up to fifth, serving six destinations, but not, at this stage, either Delhi or Mumbai. 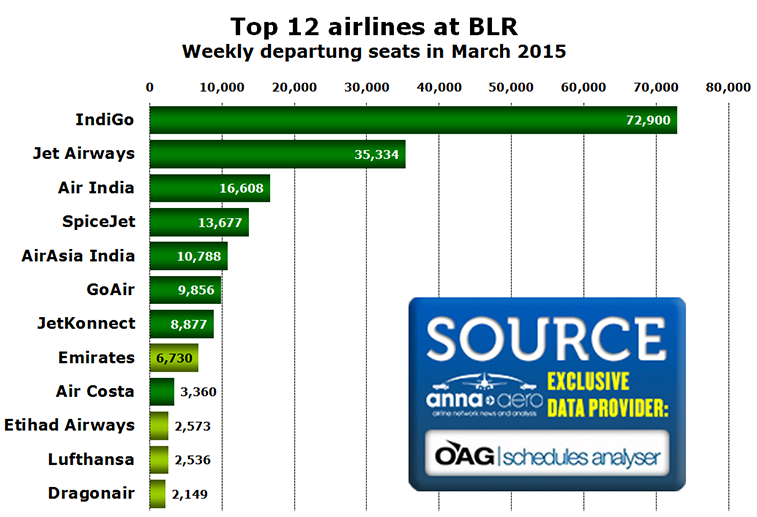 Two of the MEB3 carriers, Emirates (eighth) and Etihad Airways (tenth) are the two biggest foreign airlines in Bengaluru, with multiple daily flights to their Dubai and Abu Dhabi hubs respectively. Apart from Lufthansa, other European carriers serving the airport are Air France and British Airways, but not Turkish Airlines. Other Middle-Eastern airlines present include Air Arabia, Oman Air, Qatar Airways and Saudi Arabian Airlines, while other major Asian carriers present include Malaysia Airlines, Singapore Airlines and Thai Airways, as well as LCCs such as AirAsia and Tigerair Singapore.

So far the only new service reported as starting from Bengaluru during the rest of 2015 is Kuwait City, which Kuwait Airways plans to operate thrice-weekly from 1 September using an A320.

Service to India’s two busiest airports, Delhi and Mumbai, accounts for just over one-third of all seat capacity from the airport. Both of these routes are fought over by six airlines; Air India, GoAir, IndiGo, Jet Airways, JetKonnect and SpiceJet. Dubai is by far the biggest international route, ranking in eighth place, with more than twice as much seat capacity as Abu Dhabi. 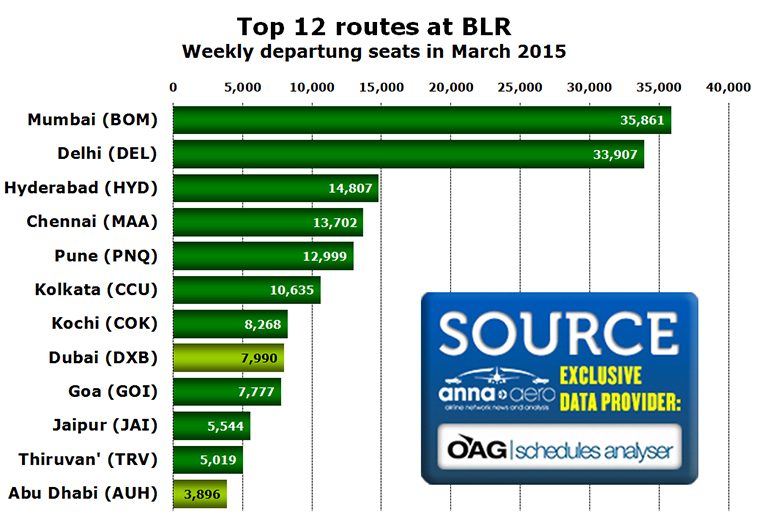 According to OAG Traffic Analyser data, the biggest onward country market for connecting traffic from Bengaluru via Dubai is the US, which accounts for three in 10 passengers, followed by the UK with 13%. London is the leading city connection (10%) beating San Francisco (6%). Given Bengaluru’s reputation as the “Silicon Valley” of India, the popularity of the San Francisco service is not surprising. Etihad Airways started its own San Francisco service (from Abu Dhabi) in November 2014, and as a result of which according to OAG Traffic Analyser for December 2014, the Californian city became the leading onward connection via Abu Dhabi from Bengaluru, accounting for 14% of onward connecting passengers, well ahead of New York with 7%.