Weekly seats up 2.4% and ASKs up 3.7% within South America; Santos Dumont-Congonhas is #1 route 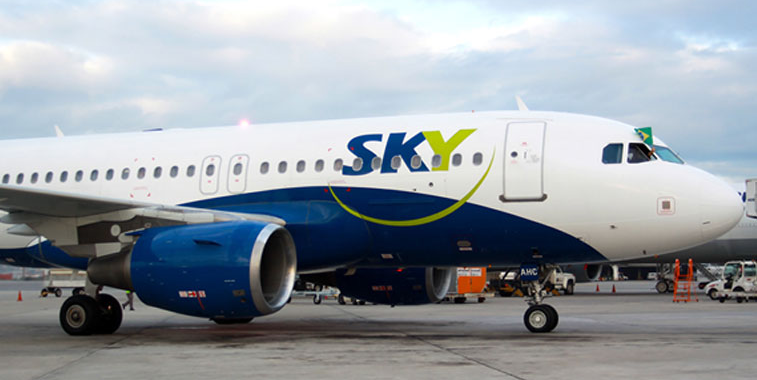 The link between Brazil and Chile is the fastest growing country pair within South America, having increased by 48% or 5,460 weekly seats in the last 12 months, mainly due to Sky Airline. Operating in competition with TAM Airlines and LAN Airlines, the Chilean carrier commenced service on the Santiago-Sao Paulo Guarulhos airport pair on 30 March 2014 with daily flights, using its A319s.

According to OAG scheduled data for this March, weekly capacity within South America, the fourth largest continent in size and the fifth largest in population, has grown by 2.4% in the last 12 months, with around 4.5 million weekly departing seats offered in this region. In the same timeframe, weekly departing flights have increased by 1.1%, while ASKs have gone up 3.7% to 3.9 billion ASKs being offered this month.

The top 12 country pairs account for 93% of all weekly seats provided within South America, which represents the same share as in the corresponding week of 2014. The Brazilian domestic market is by far the dominant country pair this year, even though capacity in this country market has increased by a modest 0.2% or 5,668 weekly seats. A total of five carriers are operating in the Brazilian domestic market this month, namely GOL, TAM Airlines, Azul Airlines, Avianca Brazil and Passaredo Airlines, with the former being the dominant player as it commands around 38% of weekly capacity, followed by TAM (31%) and Azul (22%). With a fleet of 139 737 units (comprising 34 -700s and 105 -800s), GOL is now offering more than 1.1 million seats per week across its overall network. In fact, the airline handled around 39 million passengers in 2014 (growing by 10%), at a load factor of 77%.

Interestingly, the first eight positions in this year’s ranking are all domestic markets, which highlights the fact that airlines are still focused predominately on the domestic sectors in South America. Overall, the 2015 ranking is relatively stable with no entrants in the top dozen since last March, although there have been movers in that time. Notably, the domestic markets of Venezuela and Ecuador provided -10% and -6.5% less weekly seats respectively this March and each dropped one position. Ranking ninth with a weekly seat share of 0.9%, Brazil-Argentina is the biggest international market (all of which are highlighted in light green) within South America, and is served by a total of six carriers. 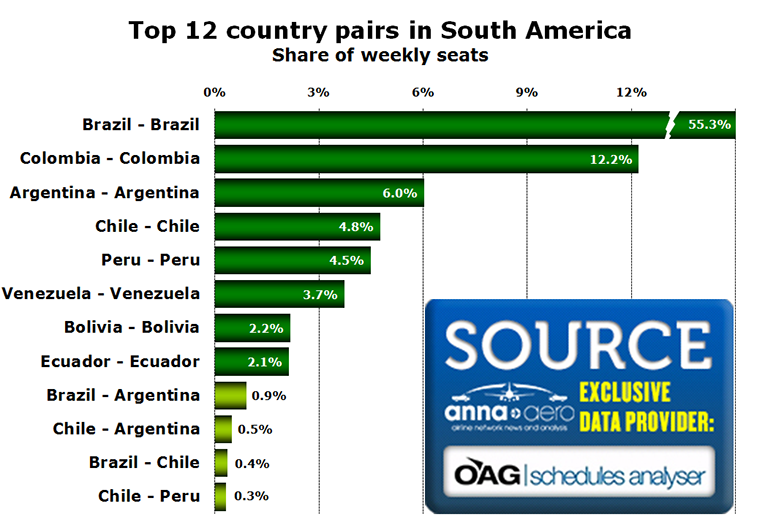 While weekly seat capacity has increased by 2.4%, seven of the 12 country pairs posted growth when comparing data from this March with the same week last year. The link between Brazil and Chile is the fastest growing country pair, having increased by 48% or 5,460 weekly seats in the last 12 months, mainly due to Sky Airline having added Guarulhos to its Santiago offering on 30 March 2014 and GOL introducing 11 weekly departures on this sector. On the other hand, operations between Chile and Argentina noted the greatest capacity decrease (-14%), followed by the Venezuelan domestic market (-10%) and Brazil to Argentina (-7.8%).

Sao Paulo Congonhas is by far the most popular origin destination for services within South America, being present in five of the top 12 route pairs, which is perhaps unsurprising considering the fact that the Brazilian domestic market accounts for over half of weekly seats on the continent. The top 12 city pairs represent 8.4% of the total market, which has slightly increased from the 8.2% recorded for the same week last year. The 367-kilometre sector between Rio de Janeiro Santos Dumont and Congonhas has managed to maintain its top position in 2015, even though it posted a modest increase of 1.8%. A total of four airlines are serving this city pair this March, the same number recorded for the same week last year. GOL is the dominant operator serving this route, accounting for 48% of weekly seats, followed by TAM with 38%. 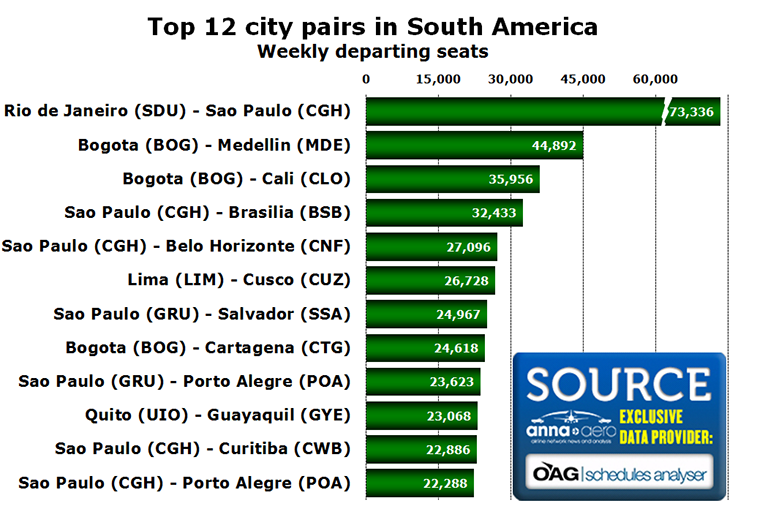 While the domestic link between Santos Dumont and Congonhas still accounts for the majority of weekly departing seats, city pair #2, Bogota-Medellin, managed to reduce the gap, as its weekly seat capacity has increased by 10% this month. By comparison four of the top dozen airport pairs noted capacity loss, with services between Guarulhos and Salvador having experienced the greatest capacity decrease (-14% or 4,134 fewer weekly seats). Both GOL and Azul have decreased their frequencies from 55 times weekly to 28 times weekly and from 15 times weekly to nine times weekly respectively since last March.