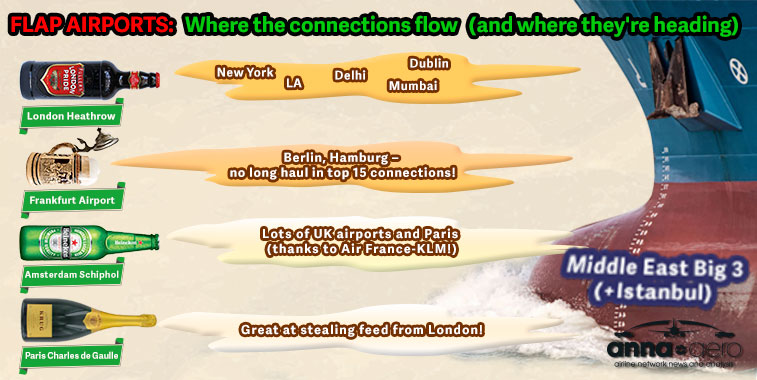 Using OAG Traffic Analyser anna.aero has worked out where the FLAP airports (an elegant acronym of Frankfurt, London, Amsterdam and Paris) actually connect their passengers to. Meanwhile, as Aéroports de Paris produces a report on how the Middle East hubs have doubled their connecting traffic in just five years (Dubai’s connections exceeded Frankfurt’s in 2013), Istanbul Atatürk Airport overtook Schiphol last year to become Europe’s fourth-biggest European hub – and it could even pass Frankfurt for third place this year! FLAP is dead. Long live FLAPI!

Europe’s best-known major hub airports at Amsterdam, Frankfurt, London Heathrow and Paris CDG (referred to collectively as the FLAP airports) all reported growth in 2014, with Amsterdam (+4.6% to 55 million) leading the way from Paris CDG (+2.8% to 63.8 million), Frankfurt (+2.6% to 59.6 million) and London Heathrow (+1.4% to 73.4 million). Connecting traffic plays a key role at each of these airports. At Frankfurt in 2014 some 55% of passengers were connecting, at Amsterdam the figure for 2014 was 40.5%, while according to UK CAA Survey data for 2013, at Heathrow the percentage is just under 37%. According to a recently published Public Consultation Document by ADP (Aéroports de Paris) the share of connecting traffic at Paris CDG is around 33%.

This week anna.aero can reveal which are the top 15 routes for connecting traffic at each of these four hub airports. Using OAG Traffic Analyser and looking at passenger flow data for 2014 to and from these airports, we have identified the routes on which the highest number of passengers are connecting through the FLAP hubs, either on their way to somewhere else, or on their way from somewhere else. The following tables show the percentage of all connecting passengers travelling on particular routes to/from the hub airport.

With typically 20 daily flights last summer between Heathrow and New York JFK it should come as little surprise to see the New York route attracting such a lot of connecting traffic. Five other US destinations make the top 15 at Heathrow confirming London’s leading position as provider of services to the US. Four domestic routes (shown in bright green) make the top 15 as well, with Manchester beating Edinburgh, while two Indian destinations (Delhi and Mumbai) both appear, with Heathrow having more daily flights to both destinations than the other three FLAP airports combined. The only non-UK, non-US, non-Indian routes to make the top 15 are Dublin (second), Toronto (seventh) and Geneva (fifteenth). 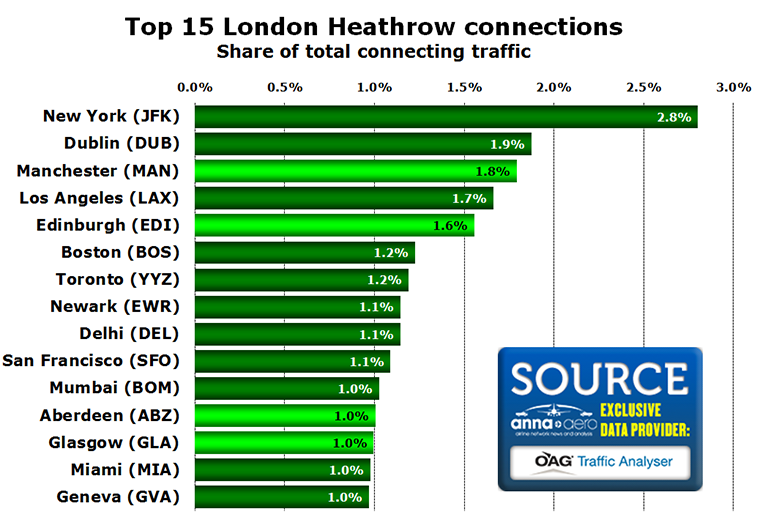 No long-haul routes in top 15 at Frankfurt

With Frankfurt’s central location within Germany and Lufthansa’s biggest hub, it is again not surprising that domestic routes lead the way at Germany’s busiest airport. Hamburg and Berlin lead the way with three other domestic routes (in bright green) also among the top 15 routes for connecting traffic. Curiously, all of the airport’s leading connecting routes are within Europe, helped by Frankfurt’s relatively central location within Europe as a whole. Tokyo Haneda is the leading long-haul route for connecting traffic, ranking 19th overall at Frankfurt. All three other FLAP airports make the top 15 suggesting that Frankfurt offers a number of destinations that are not available from these other airports. 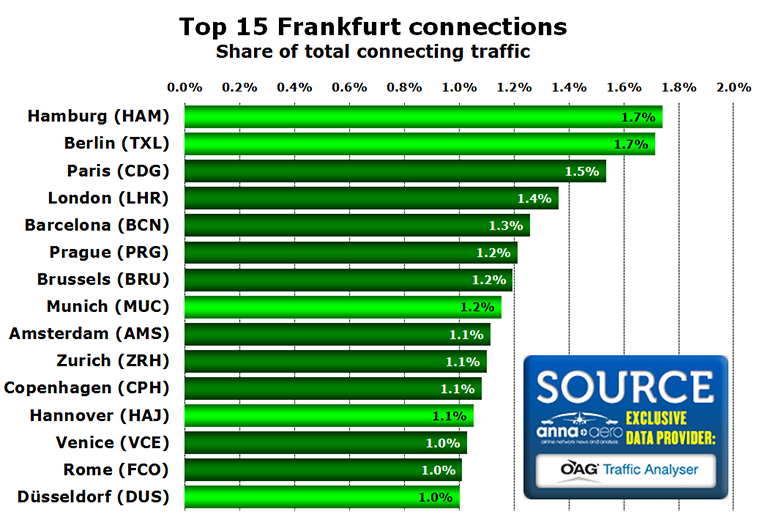 With more UK airports connected to Amsterdam than to London Heathrow the appearance of five UK airports in Amsterdam’s top 15 is not a shock. However, Paris CDG leads the way, in part thanks to Air France and KLM now being in effect one carrier. Only one long-haul destination (New York JFK) makes the top 15. Interestingly, Frankfurt’s two biggest connecting routes (Berlin and Hamburg) both make the top 15 in Amsterdam as well, suggesting that both of these airports could possibly support more direct services. Rome and Milan both feature, a legacy of KLM’s involvement in Alitalia which does not offer as many long-haul services in Italy, resulting in traffic feed through Amsterdam. Three Scandinavian airports make the top 15 with Billund (home of LEGO) just beating off Stockholm and Copenhagen. 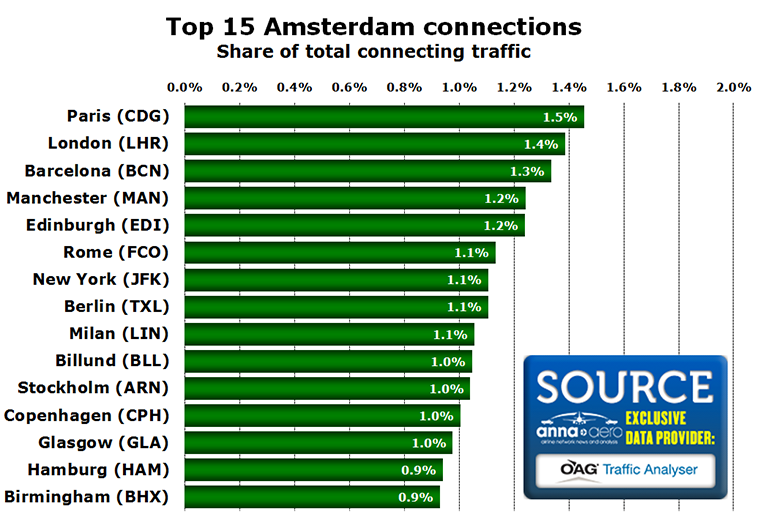 London is #1 connecting airport for Paris

As would again be expected, domestic routes feature prominently at Paris CDG as Air France focuses its long-haul operations at the airport. French-speaking Montreal is the second of three long-haul routes in the rankings, after New York JFK. But leading the way is London Heathrow. Among the leading cities that use Paris as a connecting hub for services to/from London Heathrow are Algiers, Beijing, Johannesburg, Lagos, Sao Paulo and Tunis. 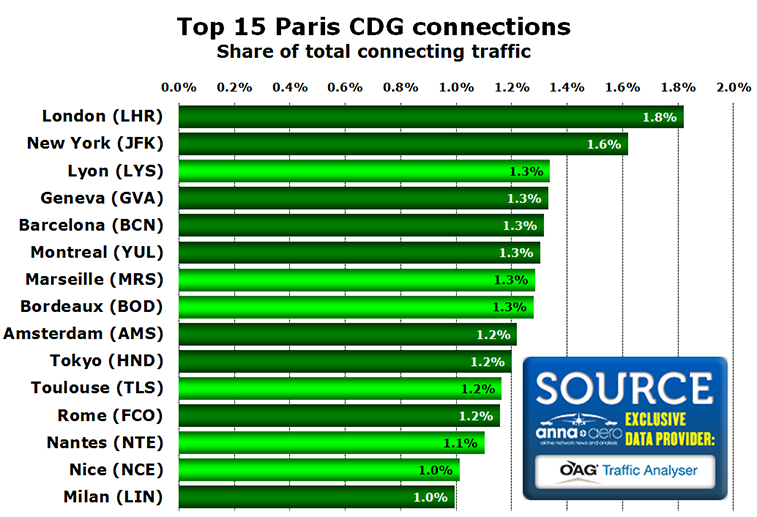 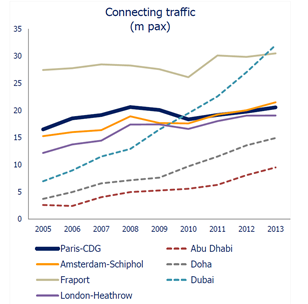 Some detailed analysis of traffic flows through the Middle Eastern hubs of Abu Dhabi, Dubai and Doha will be presented in the near future.