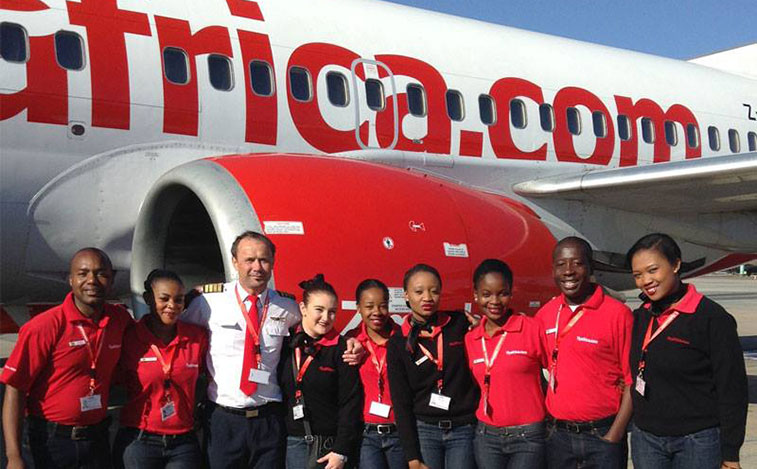 On 3 November 2014, Zimbabwe flyafrica.com – the first LCC subsidiary of the flyafrica.com group – introduced daily departures on the 956-kilometre sector from Harare to Johannesburg, utilising its 120-seat 737-500s.

flyafrica.com group launched on 23 July 2014 its first low-cost subsidiary – Zimbabwe flyafrica.com – with thrice-weekly flights (Wednesdays, Fridays and Sundays) from Victoria Falls to Johannesburg. The 925-kilometre route from the city located on the southern bank of the Zambezi River was introduced utilising the carrier’s 120-seat 737-500s. Commenting on the route launch, Adrian Hamilton-Manns, CEO of flyafrica.com, said in July: “flyafrica.com is excited to be launching in Africa, with our first airline in Zimbabwe. Zimbabwe flyafrica.com is part of the flyafrica.com family and we are committed to providing fares that are always affordable to everyone who travels to Zimbabwe. We believe that low fares are vital in developing trade and tourism for Zimbabwe and we are proud to be part of the low fare revolution.”

Seven months after it launched its first subsidiary, the group introduced Namibia as the next step in its pan-African low fare strategy, with the addition of its second subsidiary Namibia flyafrica.com. According to a flyafrica.com press release from October 2014, this subsidiary is planned to operate scheduled regional flights from Namibia to South Africa, Zambia, Botswana and Zimbabwe. The 1,165-kilometre sector from Windhoek to Johannesburg was its first route, launched on 2 February with twice-daily departures. “Namibia flyafrica.com is a key part of our strategy to build airlines in Africa that will combine low fares with global standards of safety and quality. This is the newest member of the flyafrica.com family and is part of our roll-out plan to introduce multiple airlines across Africa,” added Hamilton-Manns.

Since then the airline has expanded rapidly, offering services to a total of six airports in Zimbabwe, South Africa and Namibia, served by both Zimbabwe flyafrica.com and Namibia flyafrica.com (according to OAG Schedules Analyser data for this March). The group currently operates a fleet of five 737-500s (according to ch-aviation.ch), at least two of which were formerly operated by Czech Airlines.

Windhoek-Johannesburg is #1 route by seats

According to OAG Schedules Analyser data for this March, the airline group’s network comprises six routes, with Windhoek–Johannesburg being the largest airport pair in terms of weekly seats. This sector is already served by a total of three carriers, namely South African Airways (26 times weekly), Comair (daily) and Air Namibia (17 times weekly). Overall, Namibia flyafrica.com (bright green) connects the capital and largest city of Namibia to Johannesburg and Cape Town (as of 16 March 2015), while Zimbabwe flyafrica.com (dark green) operates from Bulawayo, Harare and Victoria Falls to Johannesburg, and the domestic link between the capital of Zimbabwe and Victoria Falls. 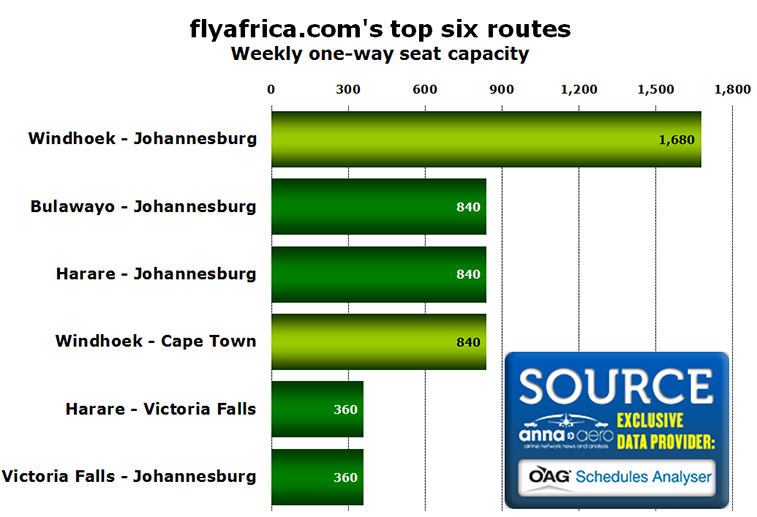 As part of the group’s future expansion, flyafrica.com is planning to introduce a new route from Lusaka to Johannesburg on 4 May with the addition of daily departures. Perhaps the airline group is gearing up to launch its third LCC subsidiary – Zambia flyafrica.com. 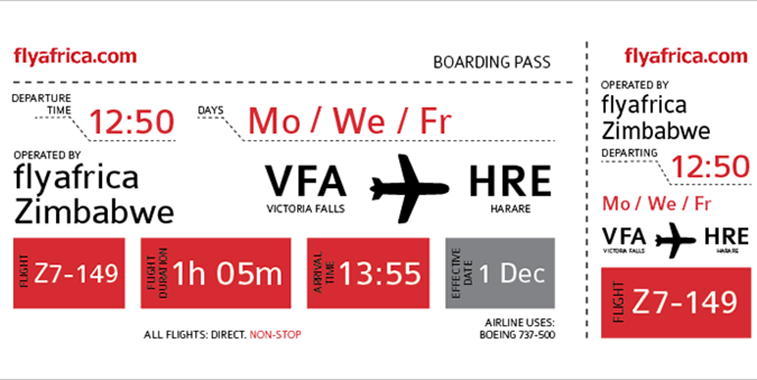 On 1 December 2014, Zimbabwe flyafrica.com introduced a new domestic service from its Harare base, this time to Victoria Falls. The 557-kilometre sector from the most populous city of Zimbabwe is served thrice-weekly in competition with Air Zimbabwe’s five weekly flights.