Tianjin Airlines, previously known as Grand China Express Air until June 2009, introduced on 2 September 2011 a new route from Xi’an to Jinchang with four weekly fights via Lanzhou. The airline still serves this sector as of March 2015, with daily flights using 50-seat ERJ 145.

Established in 2004 as Grand China Express Air in an effort to merge the major aviation assets of Hainan Airlines, China Xinhua Airlines, Chang’an Airlines and Shanxi Airlines, Tianjin Airlines (renamed as of 10 June 2009) is a Chinese regional carrier headquartered at Tianjin Airport. At that time, the carrier was China’s largest regional airline, operating on 78 routes linking 54 cities. With nearly 255,000 weekly seats (according to OAG Analyser scheduled data for week commencing 10 March 2015), the airline has managed to establish itself as the 10th largest operator in China, below Beijing Capital Airlines (258,000 weekly seats), but above Shanghai Airlines (240,000). According to Planespotters.net, Tianjin Airlines is currently operating a fleet of 88 units, namely 17 A320s, 22 ERJ 145s as well as 49 E190s.

Tianjin accounts for 9.8% of weekly departures

Examination of Tianjin Airlines’ current network reveals that the airline serves a total of 96 airports in China, Cambodia, Japan, South Korea, Taiwan and Thailand. In fact, the airline’s top dozen airports account for 54% of total flights this month, which is down 1% from last year’s figures. Not surprisingly, Tianjin is by far the airline’s busiest airport by weekly departures (9.8%), posting 3.5% growth or an increase of eight weekly flights this March when compared to data from the same period last year. The airport is connected to 37 destinations, of which the 935-kilometre sector to Xi’an is the airline’s most frequently served airport pair from Tianjin, with 21 weekly departures. Ranking second in terms of weekly flights, Urumqi (one of the airline’s secondary hubs) is connected to 16 destinations. 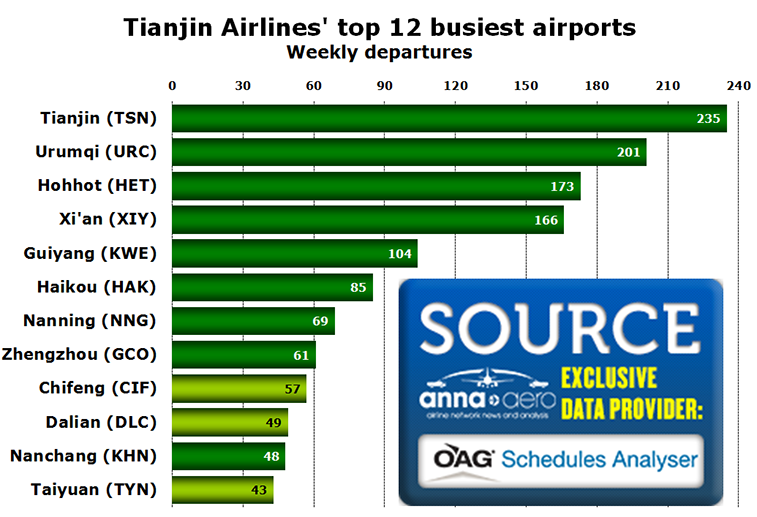 Tianjin Airlines’ weekly flights are down 1.2% this March when compared to data from the same week last year, with nine of the top dozen airports growing. Therefore, the stand out performance is that emanating from operations at Chifeng, which is also a new entrant in this year’s ranking, having increased by 97% or 28 weekly departures over the last 12 months. The airline has significantly expanded at Chifeng, increasing its frequency on the 637-kilometre sector to Hohhot from 13 times weekly to 38 times weekly. In addition, the carrier has expanded its frequency to Hailar, Shenyang as well as to Tianjin from four times weekly to daily over the last 12 months. Besides Chifeng, both Dalian and Taiyuan (highlighted in bright green) are new entrants in this year’s ranking, having grown by 20% and 48% respectively. By contrast, Zhengzhou witnessed the greatest decline, as Tianjin Airlines has trimmed 32% of its weekly departures at the airport.

According to OAG Analyser scheduled data for this March, the carrier operates a total of 177 non-stop routes. Regarding its most significant services, the top 12 airport pairs account for 14% of all weekly seats. While it was 2014’s #1 route, Tianjin Airlines’ 12% capacity decrease on the Aksu-Urumqi sector over the last 12 months has allowed the 446-kilometre route from Yulin to Xi’an to steal top-spot in 2015, following its impressive 11% growth, meaning it has become the airline’s largest served route. The carrier is serving this sector thrice-weekly utilising its 105-seat E190s and competing with China Express Airlines’ daily departures and China Eastern Airlines’ six weekly flights. 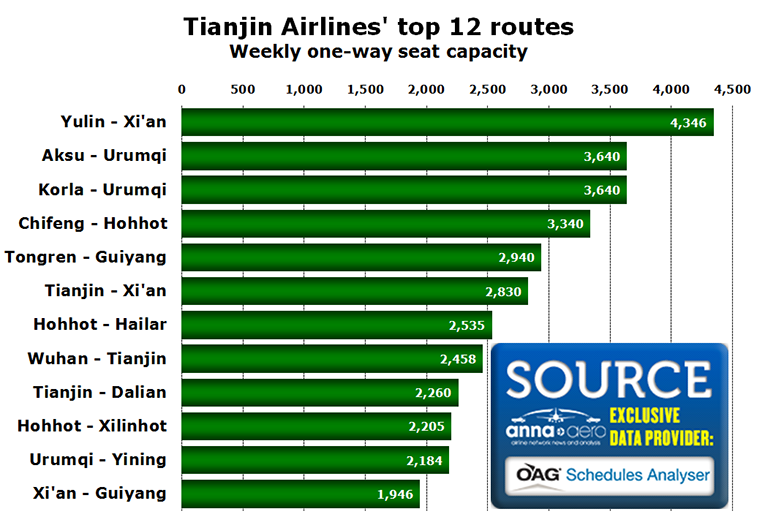 Looking at weekly seat capacity for this March, the airline posted 8.4% growth when compared to data from the corresponding week of 2014. While the Chifeng-Hohhot airport pair is the fastest-growing route (+165%), the 373-kilometre link between Tianjin and Dalian has provided the biggest capacity decline (-35%). This has come as a result of Tianjin Airlines having reduced its frequency from 34 times weekly to 17 times weekly over the past 12 months. In fact, this route is extensively contested by four other airlines this week, namely China Southern Airlines (daily), Xiamen Airlines (six times weekly), Air China (four times weekly) and China Express (four times weekly).