Casablanca Airport to break 8m for the first time in 2015; RAM commands 65% of weekly seats 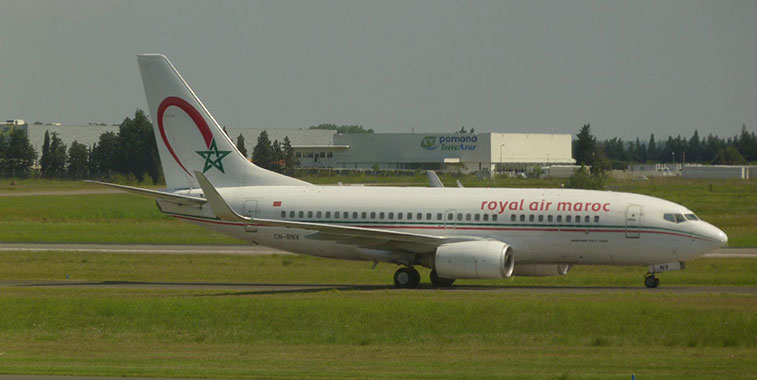 On 26 July last year, Royal Air Maroc started a new route from Casablanca to Montpellier in France. Unsurprisingly, the Moroccan flag carrier is largest airline at the nation’s biggest airport, commanding two in every three seats.

Casablanca Mohammed V International Airport is Morocco’s largest airport, serving the largest city (the political capital is Rabat) located in west of the country on the Atlantic Ocean coast. Looking at OAG Schedules Analyser data for week commencing 6 April, the airport has a network of 97 destinations served by 23 airlines. These destinations are spread across Africa (47), Europe (41), Middle East (6), North America (2) and South America (1). 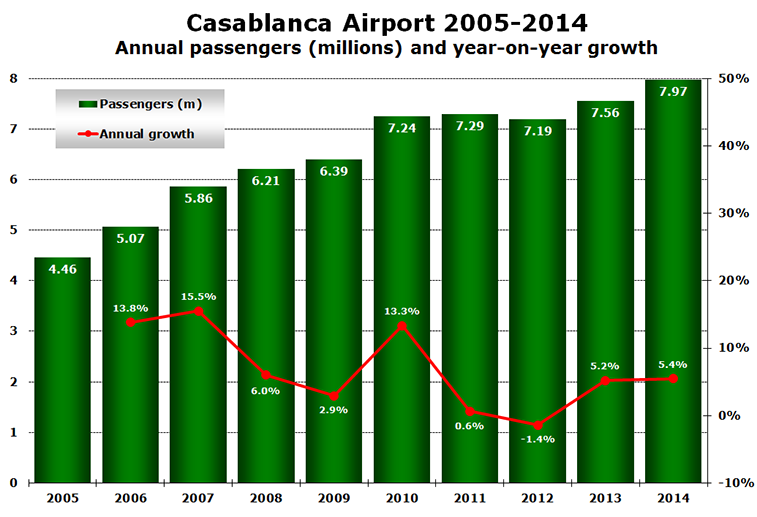 The airport is nearly twice as big as the number two airport – Marrakech, which handled just over four million passengers in 2014. Indeed, at a combined annual traffic of 8.99m passengers in 2014, the eight next biggest airports in Morocco are only just able to mass together enough throughput to beat the eight million annual passengers using Casablanca. Although too early to dictate a trend for 2015, the airport’s traffic was down 1.4% in January and 0.2% in February, against a national average (the biggest eight airports again) of a marginal 1.1% growth.

Entering Casablanca’s monthly passenger data for 2014 into anna.aero’s Seasonal Variation in Demand (SVID) calculator, the airport performs well, generating a score of 2.46 ‒ a ‘good’ rating. The airport’s seasonality performance has improved marginally when compared to the result achieved in 2013, when it attained a score of 2.54, however both years are down on the 2012 result of 1.60 – which was an ‘excellent’ score. That said, in that year, the airport was almost one million annual passengers smaller (7.19 million) than it was at the end of 2014.

Evaluating Casablanca alongside the most significant competing Moroccan airports, our data elves also ran SVID calculations on Marrakech (1.63 – ‘excellent’) and Agadir, which also generated an ‘excellent’ result (1.31). While Casablanca’s busiest month is August and its lowest is February, and Agadir is not dissimilar (August and December), Marrakech has very different traffic profile, with April being its busiest month and July was its quietest in 2014. The seasonal lows for the three airports represent 58% (CMN), 67% (RAK) and 67% (AGA) of their respective seasonal highs.

When comparing total seats being offered across all 97 city pairs in the week commencing 6 April to the same seven days in April 2014, there is a 6.1% increase year-on-year. The top two airports have gone unchanged, however with a 1.4% reduction since last April, Paris Orly’s dominance over the other airport across town has been reduced, a position also compounded by Paris CDG’s 17% annual increase. The biggest growth has been reserved for Dubai however, on which Emirates has added 75% more seats in April 2015. The top 12 offers just two domestic routes (highlighted in bright green) to Agadir and Marrakech. 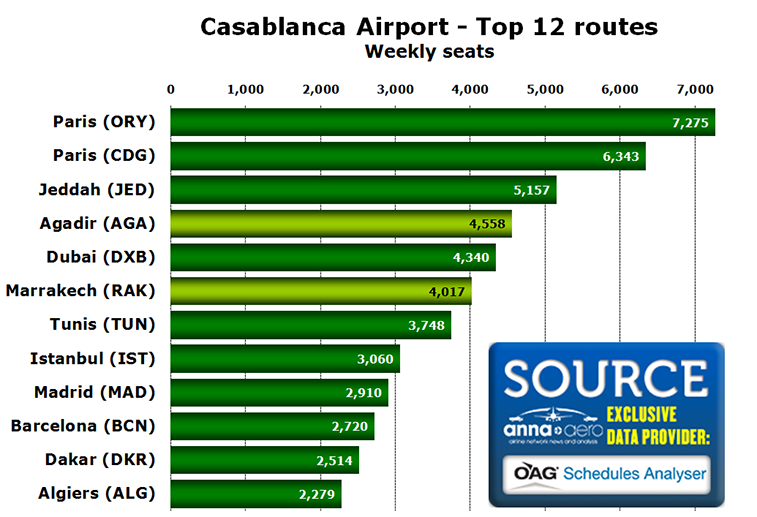 While far from being a dominant position, the top 12 offers five European airlines (highlighted in bright green), with the remaining airlines being made up from Morocco (two), Middle East (three) and Africa (two). Royal Air Maroc currently controls 65% of weekly seats in Casablanca, a figure that has gone unchanged in the last 12 months, despite it increasing by 7%. While Iberia and Tunisair are new to the top 12 in April 2015, this is to the detriment of Alitalia and Etihad Airways, both of which have been ousted. These airlines have not posted the biggest annual growth however, as this was again achieved by Emirates (+75%), seeing the MEB3 carrier jump from sixth to third in the past 12 months. Air France has reduced its capacity by the most, dropping its weekly seats by 778, or 19%, just beating easyJet, which was down by 18% year-on-year. Conspicuous by its absence at Casablanca is Ryanair, which flies to plenty of other Moroccan airports ‒ Rabat, Nador, Essaouira, Oujda, Fez, Marrakech, Agadir and Tangier. Clearly the gates to Casablanca have remained firmly bolted against the Irish ULCC’s entry. 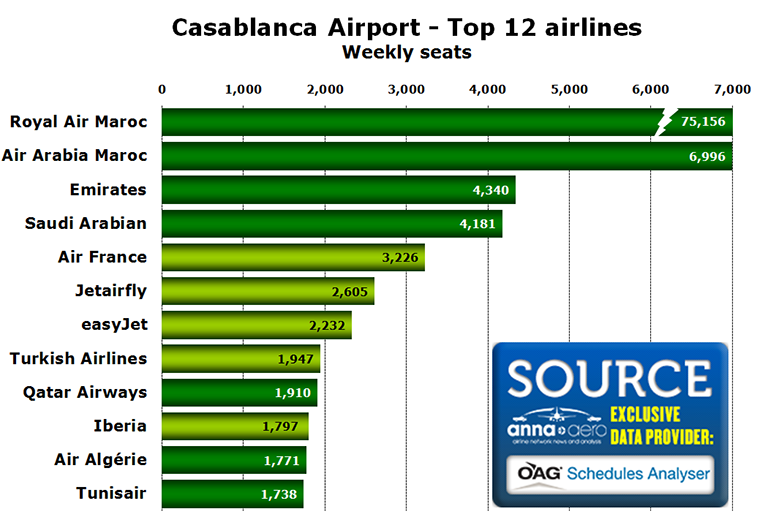 Over the last 12 months, the airport has not lost any serving carriers. That said, it has not added any either, as the same 23 airlines continue to operate from Casablanca. However, this number will be expanded by at least one during 2015, as transavia.com France plans to start operations from Paris Orly in July, according to anna.aero’s New Route Database. In addition to this new route, Air Arabia Maroc plans to launch services to Naples, with Royal Air Maroc to start operations to Abuja, both on 29 March. The Moroccan flag carrier also intends to commence thrice-weekly flights to Beijing in June.