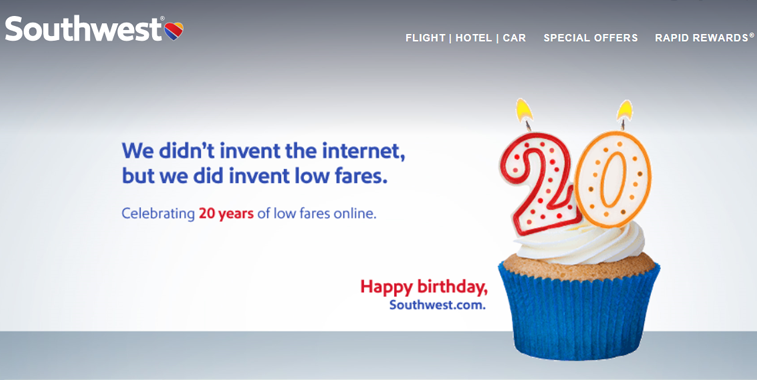 The current homepage message on Southwest.com. And yes, while it didn’t invent the internet it did write the manual on how to be a successful LCC – now carrying nearly 140 million passengers a year. It was, and continues to be a trailblazer; one that other airlines today still seek to emulate.

Southwest Airlines. While other airlines may have written some of the more recent chapters, when it comes to the low-cost carrier business model, these guys did indeed write the book. It defined what is meant by the three letters L-C-C. The well-leaved book is a tome now read, digested, developed and tweaked, but it remains the Holy Grail for aviation entrepreneurial types around the world thinking “I’m going to set-up a low-cost carrier – now how do I do it?” Its 42 consecutive years of profit-making and the fact it now carries nearly 140 passengers annually must mean that its mantras are worth following. 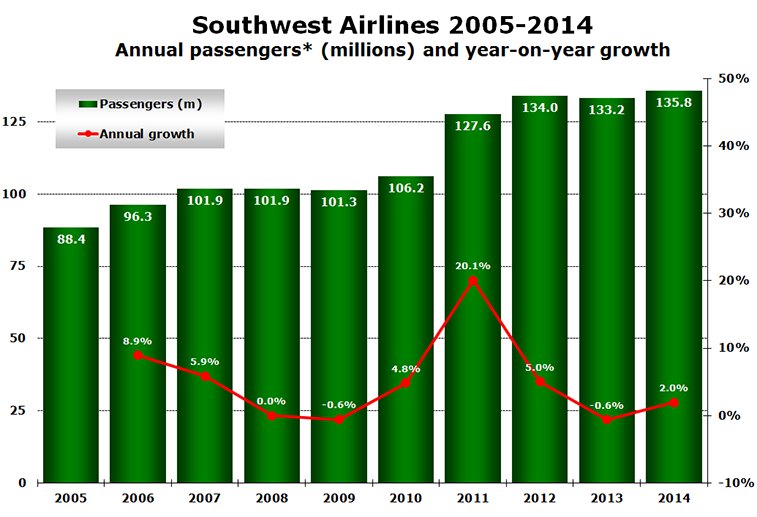 The last 10 years have seen Southwest add nearly 50 million passengers to their annual results (47.4m to be precise) achieving a CAGR of 4.4% over that period. The step change in the airline’s passenger numbers in 2011 came as a result of its acquisition of AirTran Airways on 2 May of that year, boosting enplaned traffic figures by 20 million overnight. The 140 million barrier would appear to be in Southwest’s sights, as 2015 enplaned passenger figures so far this year have risen by 4.9% to nearly 20 million.

When comparing the airline’s schedule for week commencing 6 April versus the same week in 2014, weekly seats are expected to increase by 11%. Southwest’s top 12 airports constitute just over half of its weekly capacity, and their respective share over the last 12 months have gone unchanged, standing still at 51.4%. Entering the top 12 is Atlanta, up from 21st last year (+148%), due to all of AirTran’s flying now being under a Southwest code (WN) as of the end of 2014. As a result, St. Louis drops out of the leading dozen airports listing, despite growing by 2.3% year-on-year. Capacity cuts were deepest at Houston Hobby (-4.1%) and Las Vegas (-0.4%), which coupled with Baltimore/Washington’s 12.6% capacity hike, has seen the two airports switch rankings over the last 12 months. 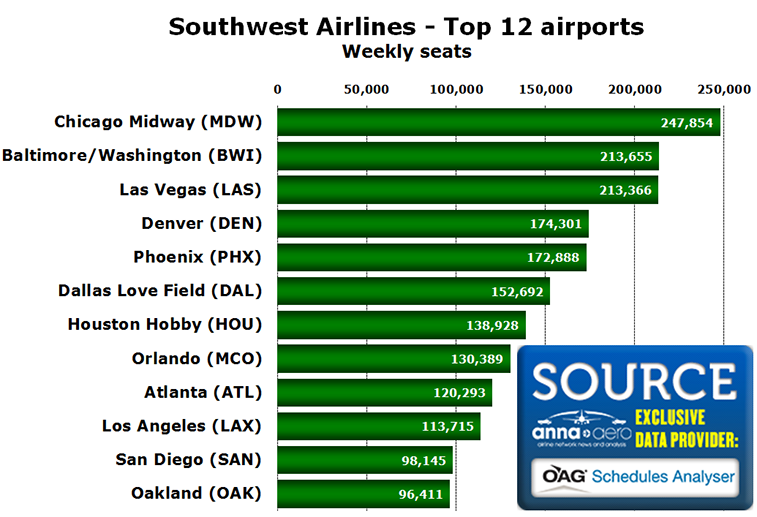 Over the last 12 months, Southwest has gained a net of five new non-stop routes, as last April it was serving 89 airports and it now operates to 94. Through its subsuming of AirTran’s operations it has added eight destinations – all international (San Jose (Costa Rica), Nassau, Mexico City, Aruba, San Jose del Cabo (Mexico), Montego Bay, Punta Cana and Cancun), but with three airports having their respective drawing pins removed from the Southwest network map – all US cities (Branson, Key West and Jackson, (JAN)).

This increased international network focus is clearly reflected in one of the airline’s monthly statistics. When comparing YTD figures in February 2015 with those from February 2014 for the airline’s average length of haul, this statistic has increased by 1.8% to 972 miles from 955. Going back further, five years to February 2010, this figure has risen 14% from 853 miles.

Over the last 12 months, six of Southwest’s top 12 airport pairs have seen their capacity increased, with the remainder having seats trimmed, including the carrier’s #1 route (a monopoly airport pair, but not city pair) between Houston Hobby and Dallas Love Field, which has witnessed a 19% drop. This is presumably in reaction to American Airlines’ 45% increase in its weekly seat offer on the Houston and Dallas city pair over the last 12 months, with both its Dallas/Fort Worth to Houston Hobby (+59%) and Dallas/Fort Worth to Houston Intercontinental (+39%) services seeing annual growth. Overall, weekly seats on the Houston to Dallas city pair are down 1%. Other airport pairs falling under the network planner’s capacity knife were Burbank to Oakland (-1%), Las Vegas to San Diego (-11%), San Diego to Phoenix (-1%), Phoenix to Las Vegas (-3%) and Los Angeles to Las Vegas (-6%). 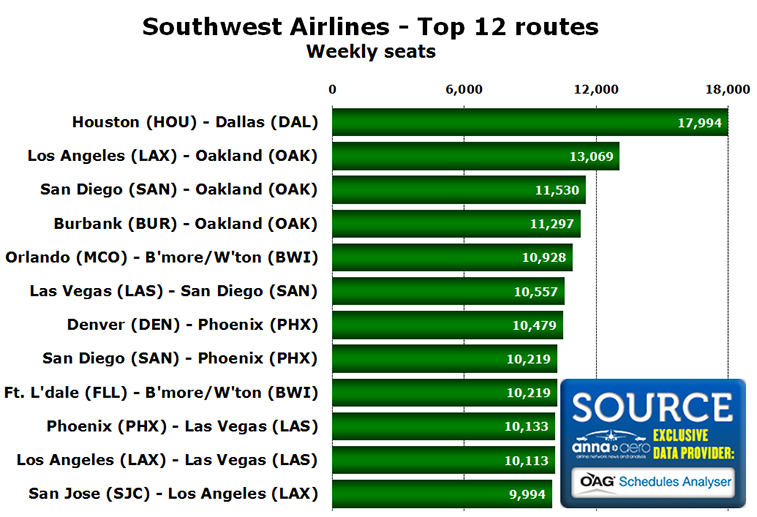 Two routes, both involving fast-growing Baltimore/Washington, have provided some stellar capacity increases since last April, with Orlando up 36% and Fort Lauderdale up 37%. Also offering double-digit growth were the Los Angeles to Oakland (+16%) and Denver to Phoenix (+19%) routes.

Looking ahead, and consulting anna.aero’s New Route Database, Southwest has 36 routes already announced for the upcoming S15 season, as per the table below:

The average frequency of the 36 routes to be introduced is 7.5 weekly flights. Some of the new routes are actually service resumptions, with Indianapolis to Los Angeles (previously operated in 2006), Oakland to Nashville (2010) and Oakland to New Orleans (2005) all having been served before by Southwest.