Say it with cakes. AEA members reported a 5% increase in passengers on North Atlantic routes in 2014 helped by the launch of several new services. These included British Airways’ London Heathrow to Austin-Bergstrom (3 March), Lufthansa’s Frankfurt to Montreal (16 May) and Turkish Airlines’ Istanbul Atatürk to Boston (12 May).

The Association of European Airlines (AEA) comprises 26 European passenger airlines (mostly flag-carriers, but also airberlin and Meridiana) as well as three cargo airlines (Cargolux, DHL and TNT). In 2014 passenger traffic for these airlines increased by 2.9% to almost 369 million. Overall load factor improved by 0.3 percentage points to 80.6%. 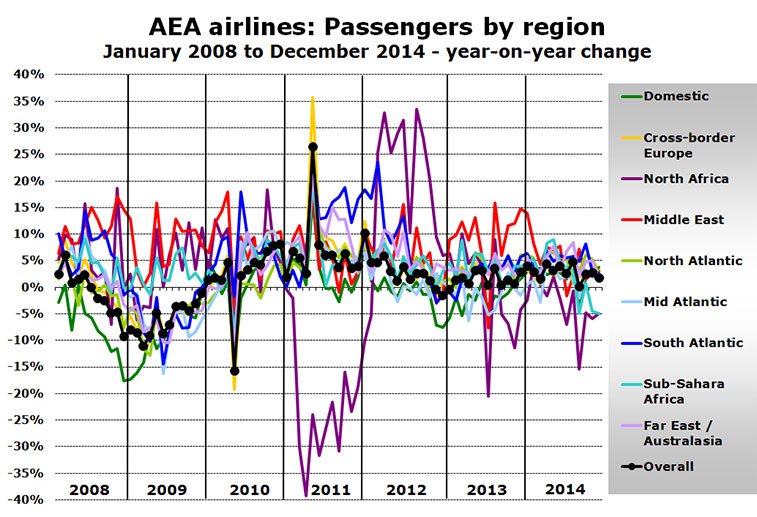 Since the beginning of 2010 this group of airlines combined, has reported growth every month with the exception of April 2010 (the Icelandic ash cloud), and the three-month period from November 2012 to January 2013, although September 2014 came close with just 0.1% growth.

However, a look at individual geographic regions shows much greater volatility. The Arab Spring of 2011 heavily influenced traffic trends to North Africa during 2011 and 2012 and the last 18 months have remained challenging for airlines serving that region. Domestic traffic, which has shown little growth for several years, was up 2.4% in 2014, comparing well with the 2.6% growth seen on cross-border Europe routes, where Europe’s LCCs (which are not members of the AEA) are key competitors.

In 2014 the fastest-growing geographic markets were the Middle East and North America, both of which saw a 5.1% increase in passengers. However, the North Atlantic market is over twice as big as the Middle East market in terms of passengers (and almost six times bigger as measured by RPKs – Revenue Passenger Kilometres). AEA members grew ASKs (Available Seat Kilometres) by 6.4% on North American routes resulting in a one percentage point drop in load factors to 84.9% in 2014, whereas on Middle East routes ASKs were up only 1.6%, resulting in a 1.4 percentage point increase in load factor to 74.7%. 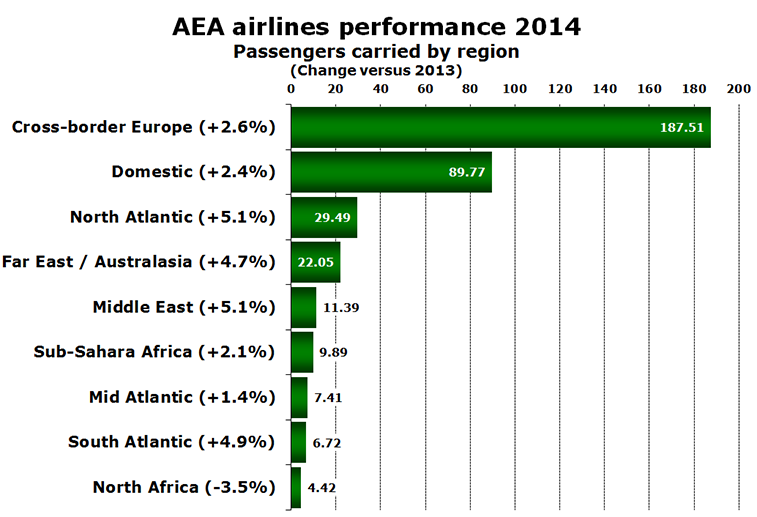