Record February for Airbus and Boeing; Spring Airlines receives its 50th A320 On 11 February, Spring Airlines – China’s first low-cost carrier – took delivery of a new A320 at Airbus’ Tianjin Delivery Centre. The newly received aircraft brings the carrier’s total A320 fleet to 50. Commenting on the delivery, Wang Zhenghua, Chairman, Spring, said: “We are pleased to expand our A320 fleet to 50 as we are going to celebrate our 10th anniversary in July this year. From the first to the 50th, our partnership with Airbus has lasted for 10 years. The A320 plays a key role in the successful development of low-cost operations in China with its high reliability, unrivalled economics and comfort in its class.”

After the strongest January since anna.aero began collating delivery data in 2008, both Airbus and Boeing delivered more aircraft this February. Besides the fact that the American manufacturer maintains its leading position over Airbus in terms of aircraft delivered in the second month of the year, Boeing continues to lead the 2015 delivery race by 31 units (up from 14 in January). When compared to the first two months of 2014, the two producers managed to increase their combined deliveries by 17 units, with 195 aircraft incorporated by carriers into their respective fleets so far in 2015.

Having delivered more than 100 aircraft for the first time in 2015, the two manufacturers have once again recorded an impressive score. The combined deliveries of both producers for the second month of the year, was 109, of which 63 came from the American manufacturer, and 46 from its European counterpart. Noteworthy is the fact that Boeing enhanced its performance when compared to the same month last year, delivering 13 more units, while Airbus handed over 10 more airframes. Overall, 73% of all February deliveries were narrow-body aircraft, which is down 2% from last month’s figures. 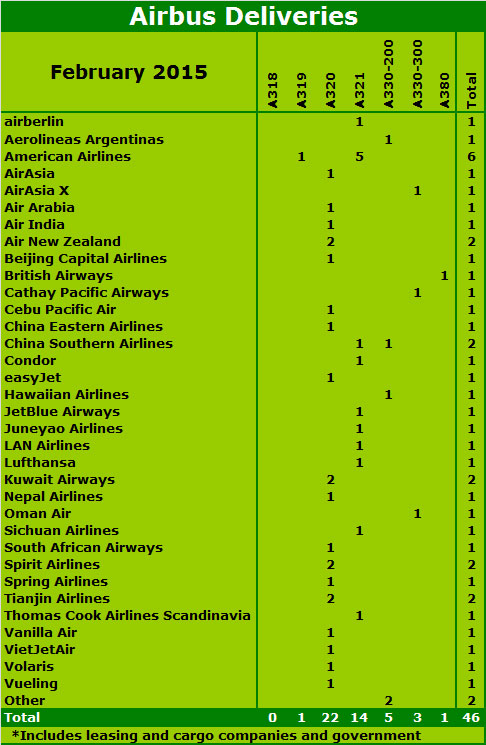 Airbus ended February with a total of 46 units delivered to airlines, which constitutes 10 more airframes than the amount delivered in January as well as two more than in the corresponding month last year. Over the two completed months of 2015, the European producer delivered 82 units, representing a decrease of 1.2% (one fewer unit) on the same period of 2014.

Once again, single-aisle deliveries in February were led by the A320 (22 units) with 37 single-aisle aircraft provided to carriers around the world. The oneworld member, American Airlines (which finalised its merger with US Airways on 31 December 2014), was the only operator to incorporate more than two narrow-body units from Airbus into its fleet, as it received five A321s and one A319. Besides this, a total of four other carriers saw two Airbus single-aisles join their respective fleets in February – Air New Zealand, Kuwait Airways, Spirit Airlines and Tianjin Airlines, each having incorporated two A320s into their fleet.

Looking at wide-body deliveries, Airbus handed over nine airframes in February, representing three more units than in the preceding month, and two more than in the corresponding month of 2014. Following January’s delivery of one A380s, the European producer handed over another single unit of the type in the second month of 2015, to British Airways, which now operates a fleet of nine A380 units. Interestingly, Airbus delivered three A330-300s, one each to AirAsia X, Cathay Pacific Airways and Oman Air. 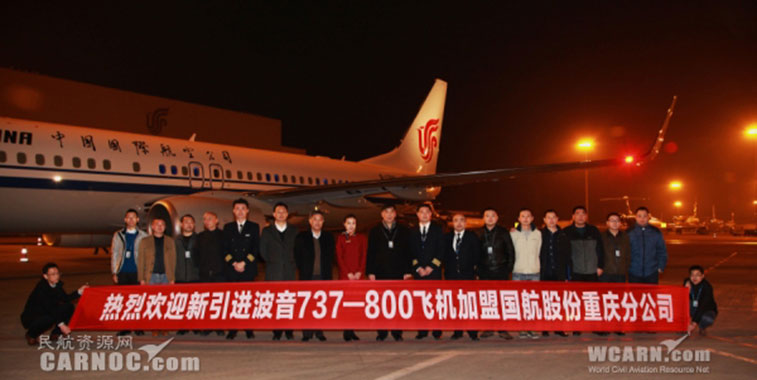 On 18 February, Air China took delivery of a brand new 737-800. The airline held a brief but warm ceremony, celebrating the arrival of the new aircraft at Chongqing Airport. 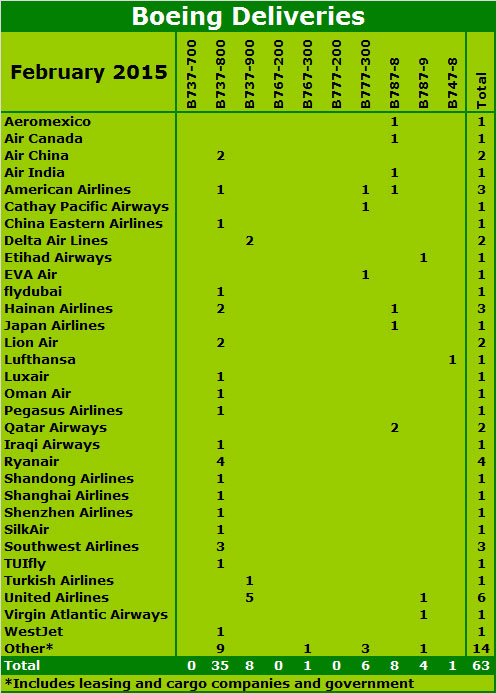 A total of 20 wide-body airframes were delivered by Boeing in February, five more units than in January. Moreover, Boeing bettered its year-on-year performance, delivering six more wide-body units than the 14 it managed in the corresponding month of 2014. Following 15 and six 787-8s delivered to airlines in December 2014 and January 2015 respectively, Boeing handed over eight units of the type reaching customers in the second month of this year. Moreover, Etihad Airways received one 787-9, while Lufthansa incorporated one 747-8 into its fleet.