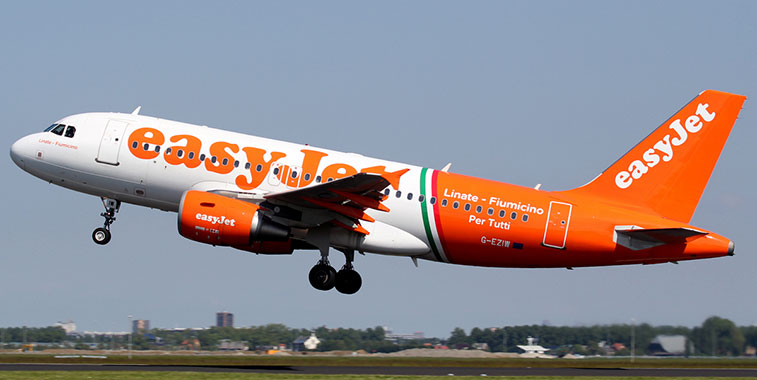 It took until March 2013 for easyJet to break Alitalia’s monopoly on the Rome Fiumicino – Milan Linate route, an achievement the airline celebrated with this revised livery on one of its A319s. While easyJet operates up to five daily flights on the route in winter, during the peak summer season this reduces to between one and two daily flights with the aircraft being used more profitably on seasonal routes.

Rome Fiumicino Airport became a designated base for easyJet in December 2008 with the launch of domestic flights to Bari and Palermo, though services from London Gatwick and Milan Malpensa had started the previous month. Prior to that time easyJet had operated to Rome’s Ciampino Airport from a total of 13 airports, starting with London Stansted and Bristol services it inherited when it acquired Go in 2002. easyJet’s first ‘new’ services to Rome were launched in 2004, from its bases in Dortmund, East Midlands, Geneva, London Gatwick and Newcastle. Basel, Belfast and Berlin services followed in 2005, followed by Paris Orly in 2006, and Lyon and Madrid links in 2007.

Once the Fiumicino base was opened in late 2008 services were gradually transferred over from Ciampino, with the final services from Ciampino operating in October 2011. However, the UK routes from Belfast, East Midlands, London Stansted and Newcastle, as well as the Dortmund service, were all dropped from Ciampino before they could be switched. This summer easyJet will be operating almost 300 weekly departures from Rome Fiumicino, making it the airport’s third busiest carrier in terms of weekly seats, accounting for just over 8% of capacity, well behind Alitalia (36%) and Vueling (11%), but still ahead of Ryanair. 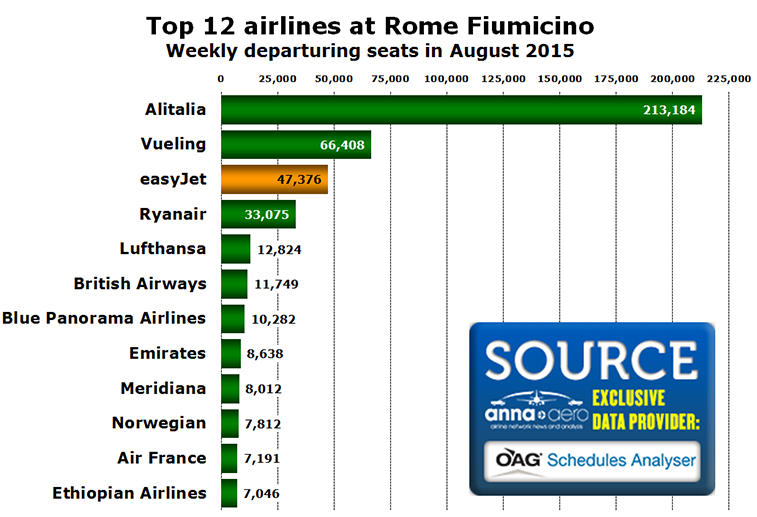 Serving 37 destinations this summer, up from 33 in S14

easyJet’s network at Fiumicino will reach a new high of 37 destinations this summer, up from 33 a year ago. For the second summer running the number of flights will increase by around 18%, though winter capacity has remained almost unchanged and has actually fallen since W12/13. The net increase of four destinations disguises rather more significant changes, with five routes having been dropped (Athens [ends 12 April], Belgrade, Montpellier [ends 17 May], Palermo and Thessaloniki) while nine destinations have been added (Alicante, Kos, London Luton, Marseille, Munich, Santiago de Compostela, Tenerife South, Vienna and Zakynthos). Of these, London Luton, Marseille, Tenerife South and Vienna launched at the end of 2014, with the remaining five routes set to start operations this summer. 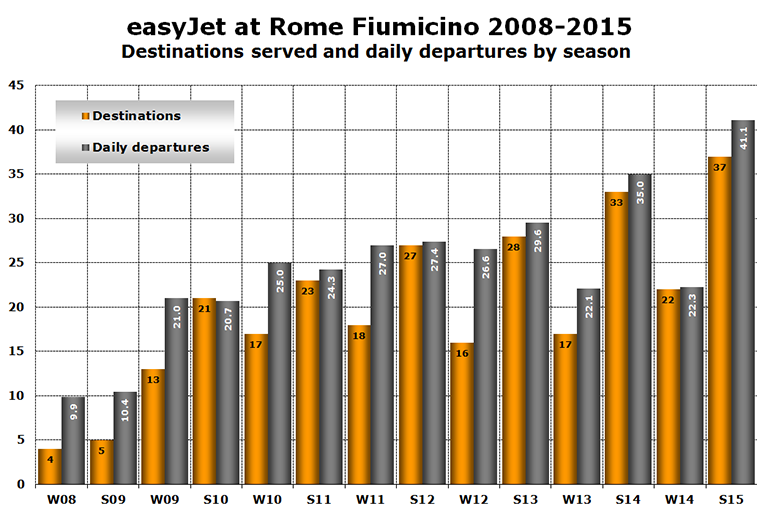 Source: OAG Schedules Analyser for first week of February and August each year.

Apart from the five routes mentioned above, other destinations that easyJet has served from Fiumicino since 2008 but that are no longer part of the airline’s network include Bari, Bilbao, Düsseldorf, Lamezia Terme, Lisbon, Madrid and Venice Marco Polo.

Analysis of easyJet’s leading country markets from Fiumicino this summer, and comparison with last summer, reveals some interesting shifts. Greece, which was served with 44 weekly departures last summer, making it the leading country market, falls to fourth this summer, as France, Spain and the UK are now all served with more weekly flights. Germany, Spain and the Netherlands have all seen a near doubling of easyJet flights from Rome, while Austria is a new country market. Serbia is no longer served with the ending of Belgrade flights last year. The leading French market comprises six routes; Paris Orly (14 weekly flights in August), Nice (13), Lyon (11), Marseille (seven), Toulouse (five) and Nantes (three). 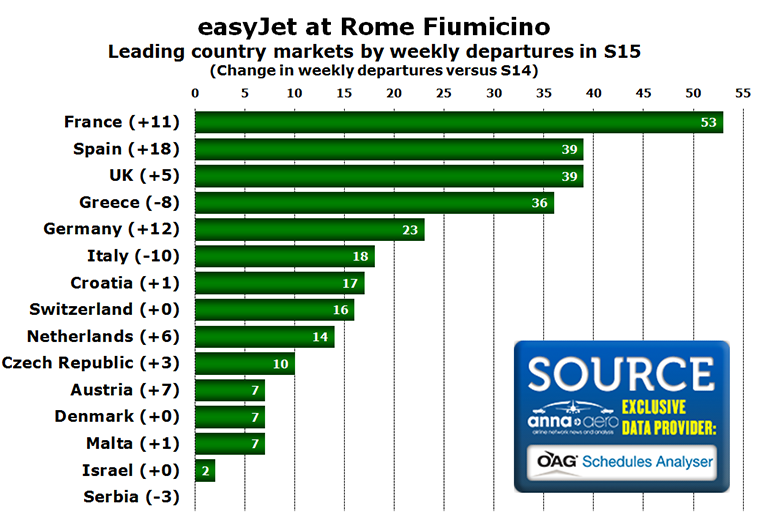 Alitalia and Vueling provide most competition

With Rome being such a popular business and leisure destination, it’s no surprise that there is intense competition on the majority of easyJet’s routes from Fiumicino. Of the 37 destinations served this summer just three face no direct competition, and one of those, Berlin, faces intense indirect competition. Alitalia (on 19 routes) and Vueling (on 24 routes) provide the most competition while Ryanair so far competes directly on only one route, to Marseille. However, Ryanair competes indirectly on many markets with its operations from Rome Ciampino. Vueling has launched over 50 routes from Rome Fiumicino in the last two summers, with easyJet destinations Kos, London Gatwick, Lyon, Nice and Vienna all starting this summer.

easyJet shows no signs of backing down in Rome from this onslaught by Vueling while Etihad-supported Alitalia is also under pressure. The winner at the moment would appear to be the Italian consumer, and those Europeans wishing to visit Rome this summer, who will benefit from the lower fares in the market needed to stimulate demand to fill all the extra capacity. 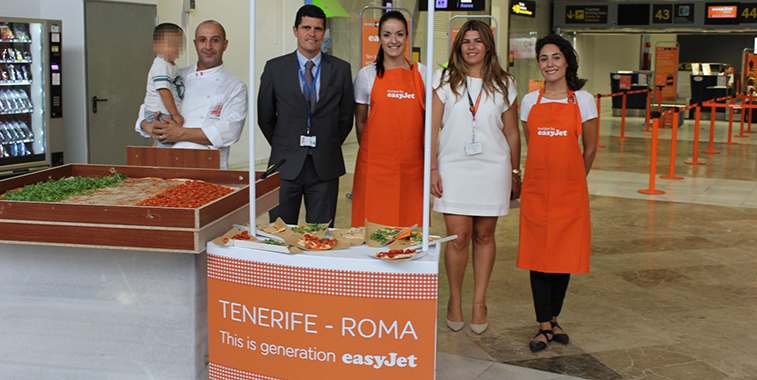 easyJet launched twice-weekly flights at the end of October 2014 between Rome and Tenerife. Celebrations at the Spanish airport were pizza-themed. This summer easyJet will operate 39 weekly flights from Rome to Spanish destinations, up from 21 last summer. Apart from Tenerife there will be new routes to Alicante (starting on 13 April) and Santiago de Compostela (starting on 8 June), while Ibiza sees a doubling of frequency from daily to twice-daily.