Ryanair transatlantic U-turn: anna.aero examines the “what if scenario” revealing where it may have flown 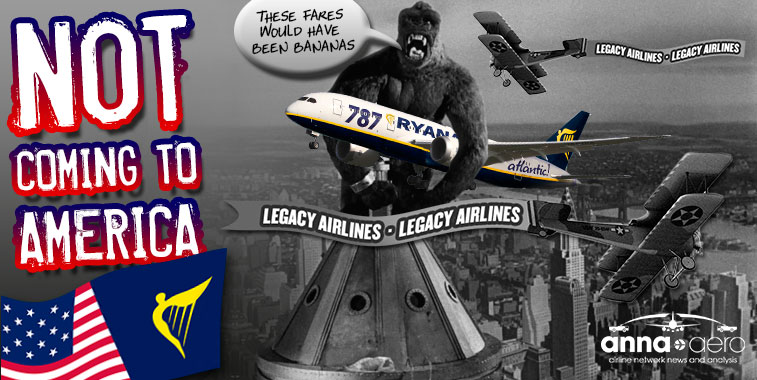 OK this analysis is all pure fantasy. Ryanair has promised it won’t be launching transatlantic flights in 2020 and, before you write in, we know there are no giant monkeys in New York.

“In the light of recent press coverage, the Board of Ryanair Holdings Plc wishes to clarify that it has not considered or approved any transatlantic project and does not intend to do so.” So reads the full transcript of the Ryanair Stock Exchange statement ending a curious week of “miscommunication” made worse by the St Patrick’s Day holiday. Therefore there’s no new airline with a new brand (we thought “O’LearJet” or the more PC “Ryanair Atlantic”) and Ryanair is definitely not looking at 14 European bases to fly to US destinations including Boston, Chicago, Florida, Miami, New York and Washington. The emphatic retraction will have brought big sighs of relief in legacy airline board rooms in London, Frankfurt, Chicago and Atlanta, airlines which have already surrendered their respective short-haul network territory to the LCCs and now generally only make profits from long-haul (which is often already much pretty ‘low cost’ anyway, without the mainstream low cost competitors jumping in). Ryanair’s arrival on the Atlantic would have been made more worrying now that it is cosying up to business passengers, and flying into more primary airports around Europe which could have potentially fed any planned transatlantic routes.

Despite denying any intentions in its Stock Exchange statement (the earlier reported comments suggested it was looking at up to 14 European bases including London Stansted, Dublin, Cologne Bonn, Berlin, plus others in Spain, Italy and Scandinavia), anna.aero has identified 10 Ryanair bases which it could have potentially turned into ready made hubs with Ryanair feed. The 10 airports, and the criteria for choosing them, are as follows: 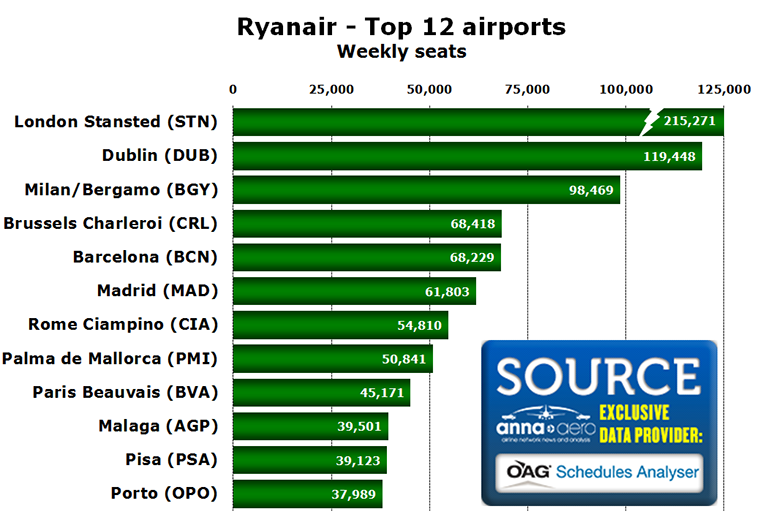 Of course, Ryanair Atlantic could have decided to stay away from easy pickings (the airports with currently the most US capacity) and instead go for some other options in Spain, Italy and Scandinavia. On that basis, it could also have experimented with some old-fashioned Ryanair market-making and go to an airport which has no US service at all…maybe Valencia (#29 largest operation for Ryanair), presuming it elected to avoid providing US services to the bigger operations of Palma de Mallorca (#8) Malaga (#10) or Alicante (#14). In a similar strategy it may have brought expanded US services to partially-tested destinations like Pisa (#11), which presently only has a limited peak season Delta Air Lines service to New York JFK.

It would have been JFK rather than EWR

On the other side of the Atlantic anna.aero data elves also examined potential US destinations that would have made sense for Ryanair and the possible frequency of service. The now-denied reports said it was considering Boston, Chicago, Florida, Miami, New York and Washington. It is noticeable that no US West Coast destinations were mentioned, unlike fellow LCC Norwegian which serves Oakland (OAK) and Los Angeles (along with New York (JFK), Fort Lauderdale (FLL) and Orlando (MCO) on the East Coast). While Boston (BOS) and Chicago (ORD) would offer no airport choice, the field would have been open to a much wider selection of airports at other cities. But we think Ryanair Atlantic would have gone to these airports:

For Florida – Orlando was  selected – the biggest US point of entry from Europe (22,058 weekly seats – more than four times bigger than Tampa and Orlando Sanford combined) for this city/region and following Ryanair’s new strategy of serving ‘main’ city airports;

For Washington – Washington Dulles was selected – the biggest US point of entry from Europe (44,992 weekly seats – more than thirty times bigger than Baltimore/Washington) for this city/region and following Ryanair’s new strategy of serving ‘main’ city airports;

For Miami – Miami was selected – the biggest US point of entry from Europe (39,987 weekly seats – more than 15 times bigger than Fort Lauderdale and Southwest Florida combined) for this city/region and following Ryanair’s new strategy of serving ‘main’ city airports;

Unsurprisingly, London Stansted leads the way with the potential for nearly 50 weekly flights to the six US destinations, with New York JFK offered twice daily. The US airport would have also been the most popular US destination for Ryanair Atlantic, with 67 weekly frequencies anticipated. At the opposite end of the scale, Stockholm Skavsta would only offer twice-weekly frequencies across all six destinations, with half of these requiring to be ‘stimulated’ as they are presently unserved from the Stockholm city/region market.

It is important to stress that this analysis is based on summer season analysis only, winter season services would probably see frequency reductions across many of the routes. It is also based on capacity from S15 schedules ‒ naturally S19 or S20 capacities (the date when it was reported that airline might launch) would look very different to this.

What a shame none of this is ever going to happen…or is it???

How we worked the frequencies out…

Using capacity from a week in April (week commencing 6 April) is a good indicator of true demand as opposed to peak demand that typically exists in July/August. Any airline called Ryanair Atlantic may well have chosen to increase its frequency in these periods to match demand.

Total capacity to a city/region has been considered – so, for example, to New York, the airport in question’s weekly seats to Newark and JFK have been combined (see table above for other city/region combinations).

If the potential Ryanair Atlantic base airport (airport 1) is smaller than the biggest airport (airport 2) with US services in the country (for example Cologne Bonn and Frankfurt), then it is assumed that a share of US traffic will be clawed back to airport 1 from airport 2. If airport 2 serves the same city (for example Milan Malpensa and Milan/Bergamo) or is under 100km away, then 100% of its capacity is considered in the calculation; 101-150km, then 50% of its traffic is considered; and >150km then 10% of its capacity is considered.

Back-hauling was permitted, as long as it was from a smaller to a larger airport in terms of weekly US capacity (for example from Shannon to Dublin), but not the other way around (for example no traffic has been calculated from Madrid to Barcelona, but there are expected flows in the other direction).

No cross border feed has been permitted (for example Stockholm Skavsta and Copenhagen will be connected by Ryanair from this winter so there could be potential for passengers to self-connect).

For markets where there is currently no existing US capacity from the city/region in question, these have been allocated a ‘stimulation’ frequency of twice-weekly, as a previously untried and untested market, as Ryanair is clearly a past-master at creating markets where others would fail.

Understand all that? Call us and we’ll send you a prize.