A major reason to visit Sacramento is the Annual Pacific Rim Street Fest, which takes place in Old Sacramento as well as the Sacramento Downtown Plaza and displays the richness and diversity of many Pacific Rim cultures through cultural programs, entertainment, art and food. Sacramento Airport is the primary gateway to the city as it offers 26 non-stop services flown to the US, Canada and Mexico. In addition, as of 18 June, Boston will join Sacramento’s extensive network.

Established in October 1967 as Sacramento Metropolitan Airport, Sacramento Airport is owned and operated by the County of Sacramento, along with Mather Airport (cargo aviation), Executive Airport (general aviation) and Franklin Field (general aviation training activities), all of which comprise the Sacramento County Airport System. Sacramento, the capital city of the state of California, is located at the confluence of the Sacramento River and the American River, 140 kilometres northeast of San Francisco. The airport, which is located 16 kilometres northwest of downtown Sacramento, caters for a population of 2.6 million, and is currently served by 10 airlines, of which Southwest Airlines handles around half of all passengers. Today, Sacramento offers non-stop flights to 26 destinations spread across the US, Canada and Mexico (according to OAG Schedules Analyser data for this March). Starting 18 June, Boston will also be available as a non-stop destination for the first time from Sacramento as JetBlue Airways is introducing a four times weekly service on the city pair. 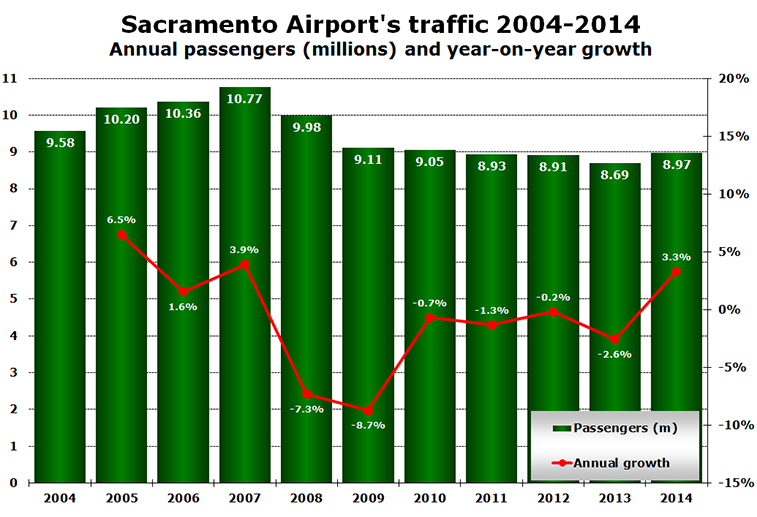 Analysis of data facilitated by the airport authority reveals that Sacramento’s traffic declined significantly in the period after 2008. While the global financial crisis will undoubtedly have had a major impact on passenger flows to and from the airport, after traffic peaked in 2007 at close to 11 million, clearly there are other external factors at play, which have precipitated this decline. Overall, the airport’s traffic has decreased at an average annual rate (CAGR) of 1% over the 2004-2013 timeframe. Nonetheless, Sacramento consolidated its annual passenger performance, reporting close to nine million passengers last year (representing an increase of 3.3% over 2013 figures).

Entering Sacramento’s monthly passenger data for 2014 into anna.aero’s Seasonal Variation in Demand (SVID) calculator, the airport performs exceptionally well, producing a score of 0.98, an “excellent rating”. However, the airport’s seasonality performance has worsened when compared to the score recorded last year (0.77). With over 20 seasonality performance evaluations completed so far this year, Sacramento has entered the rankings at #5 spot overall, lodging itself between Sao Paulo Congonhas (0.96) and Bengaluru (1.27).

To give Sacramento a fair evaluation, we also ran calculations on San Francisco (1.28 – excellent) and Oakland (1.36 – excellent). Against its airport peers from the state of California, the airport performs better than the significantly larger San Francisco (47 million) and Oakland (10 million). In addition, the seasonal lows for the three airports represent 72% (Sacramento), 69% (Oakland) as well as 68% (San Francisco) of their respective seasonal highs.

Southwest dominates with 58% and 51% of seats and flights

Evaluation of OAG schedule data for this March indicates that a total of 10 airlines are serving Sacramento, with Southwest maintaining its top position. The world’s largest low-cost carrier, according to passengers handled last year, accounts for 58% and 51% of all weekly seats and flights respectively and operates a total of 11 routes from Sacramento, of which San Diego is the most frequently flown destination, being served with 61 weekly flights. Furthermore, Southwest is gearing up to commence a new daily service to Sacramento on 8 April, this time from its corporate headquarters at Dallas Love Field. Controlling 9.5% of seats at the airport, Alaska Airlines — ranking third — links Sacramento to Seattle-Tacoma (39 times weekly), Portland (26 times weekly), Boise (daily) and Kahului in Hawaii (daily). 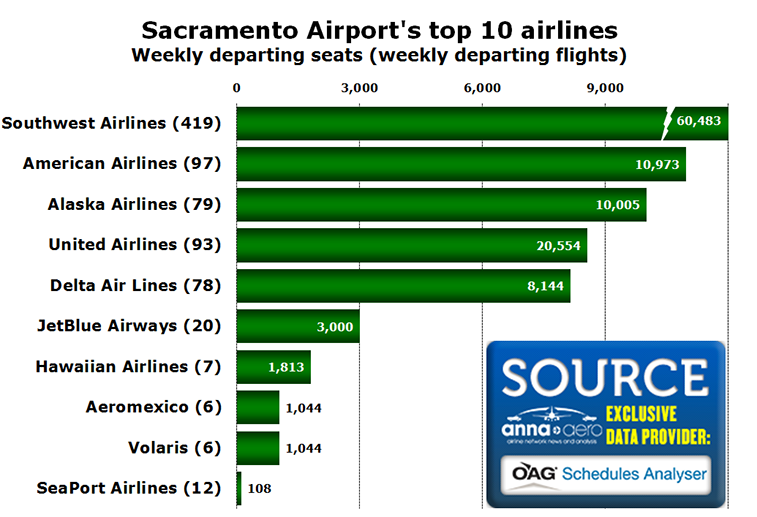 Weekly seat capacity for this March has gone up 0.6% (when compared to the same week last year), with five of the 10 carriers recording capacity growth, while Hawaiian Airlines saw its operations unchanged. In addition, US Airways’ operations have been absorbed by American Airlines as part of their merger that was finalised in December 2014. Hence, American — ranking second this year — posted massive increase of 112% this March. Nonetheless, Volaris is the fastest growing carrier at Sacramento with an annual increase in weekly seats of 142%, due in part to having increased its frequency on the 2,671-kilometre sector to Guadalajara from thrice-weekly to six times weekly over the past 12 months. Contrarily, United Airlines witnessed the biggest capacity decline at the airport, having trimmed a total of 2,096 weekly seats (-20%) from its March schedule. Interestingly, in the last 12 months, Sacramento has seen the arrival SeaPort Airlines with twice-daily flights to Visalia (located off Highway 99 between Fresno and Bakersfield), while Sun Country Airlines withdrew its weekly departures to Bullhead City. SeaPort’s flights are part of the Essential Air Service (EAS) program administered by the Federal Department of Transportation. The EAS program provides subsidised services connecting small communities with hub airports.