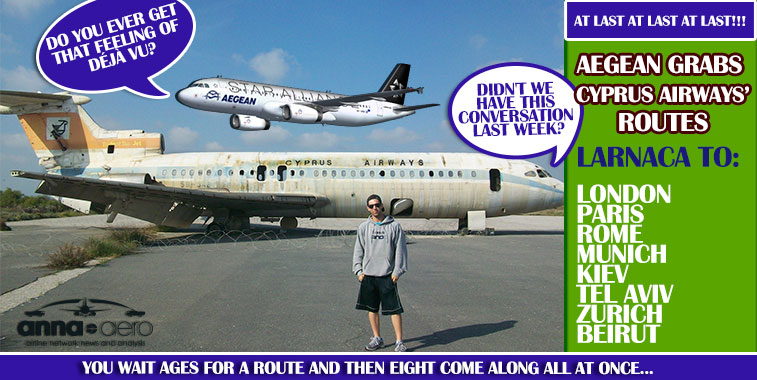 Seeing the opportunity in its backyard, Aegean Airlines has finally staged a wholesale takeover of Cyprus Airways’ Larnaca routes, making the Star Alliance carrier the second biggest route launcher at the start of S15. However, it is slightly curious that Aegean did not find the capacity to do so earlier after the Cypriot national carrier folded on 9 January. This year, in the first three weeks of the summer season, ‘New Ryanair’ is launching slightly fewer routes, 38 compared to 60 in 2014, but that’s still more than double any other airline in the world.

Sunday 29 March represents the start of the northern hemisphere’s “summer season”. This is when airline schedules are significantly adjusted to cope with the seasonal changes in demand, and when European airlines typically launch the bulk of their new routes for the year. According to anna.aero’s comprehensive database, the number of new airline services being launched in the first three weeks of the summer season almost identical to the figure we calculated for each of the last two summers, at around 460. These new services will be operated by over 140 airlines operating to airports spread across over 90 countries.

Ryanair’s business model may have evolved during the last year, but that hasn’t stopped it being by far the busiest airline when it comes to new route launches. However, in the first three weeks of the summer season last year it launched over 60 new routes, whereas for the equivalent period this year (24 March to 13 April) the figure is down by over one-third to ‘just’ 38. However, that is still more than twice as many as any other airline with Aegean Airlines and easyJet the nearest competitors with less than 20 new routes each. Ryanair’s batch of new routes include several from its new operating bases in Bratislava (Slovakia), Copenhagen (Denmark) and Ponta Delgada (Portugal), as well as additional services from Rome Fiumicino that used to be operated from Rome Ciampino.

Aegean Airlines’ second place ranking has much to do with the airline’s decision to launch a number of routes from Larnaca Airport in Cyprus following the demise earlier this year of Cyprus Airways. easyJet’s new routes are spread across its network of over 20 bases with no single airport dominating. 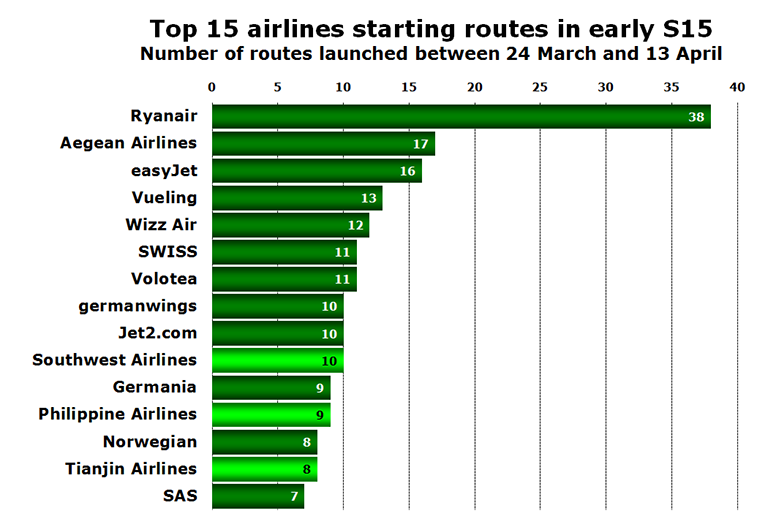 Europe’s FIGUS countries plus China and US dominate

Analysis by country market reveals that, as usual, this summer’s new routes are dominated by services to European countries, with the FIGUS markets (France, Italy, Germany, UK and Spain) taking five of the top six positions, with the massive US and China markets also welcoming a significant batch of new services. For the second successive summer Germany ranks first for new routes (but only just!) with airberlin, easyJet, Germania, germanwings and Lufthansa all contributing significantly. In Italy, Ryanair with 19 new routes, easily beats easyJet (six new routes), with Alitalia, Volotea and Vueling on four each. In Spain, Vueling leads the way with 12 new routes, followed by Ryanair with eight, and Iberia and Norwegian with six each. 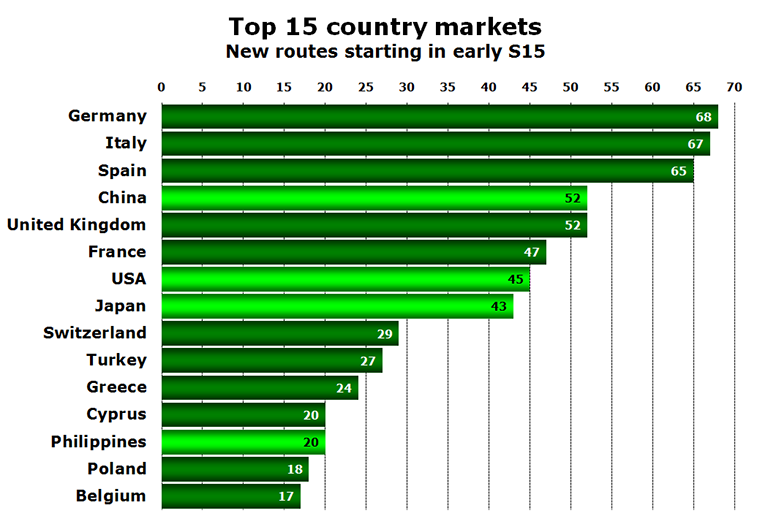 Apart from China and the US, two other non-European markets (shown in light green) make the top 15, Japan and the Philippines. Operations at many airports outside of Europe are not slot co-ordinated (unlike at most major airports in Europe), meaning that airlines feel less compelled to start new services at the start of the scheduling season, when demand is often still quite low.

As regular readers of anna.aero will know, even after the peak of the next few weeks, the number of new routes launched each week around the world will continue to be high until about mid-July. So if your airport or airline is going to start or welcome a new route this summer, make sure the route celebrations are well-recorded and send us the pictures, so that we can share them with our readers.