The thrice-weekly, ERJ 135-operated JETGO Australia service from Brisbane to Tamworth started on 2 March. However, in 2014, domestic and regional airline growth (+0.4%) in Australia was outstripped by that achieved by international airlines (+5.6%).

Australia’s air travel market is dominated by its top 10 airports – which processed around 90% of total passengers in 2014 (just under 130 million of the 145 million total) – and by four carriers from two airline families – Qantas and its LCC Jetstar Airways slugging it out against Virgin Australia and now wholly-owned Tigerair Australia. According to the latest data available from BITRE, the top 20 airports in the country have seen their combined traffic increase by 1.5% in 2014, with domestic passenger numbers relatively flat (0.4%) versus healthier growth seen in the smaller international sector (5.6%). Indeed, domestic and regional airlines make up 77% of passengers, with international airlines taking up the residual across the top 20 airports. 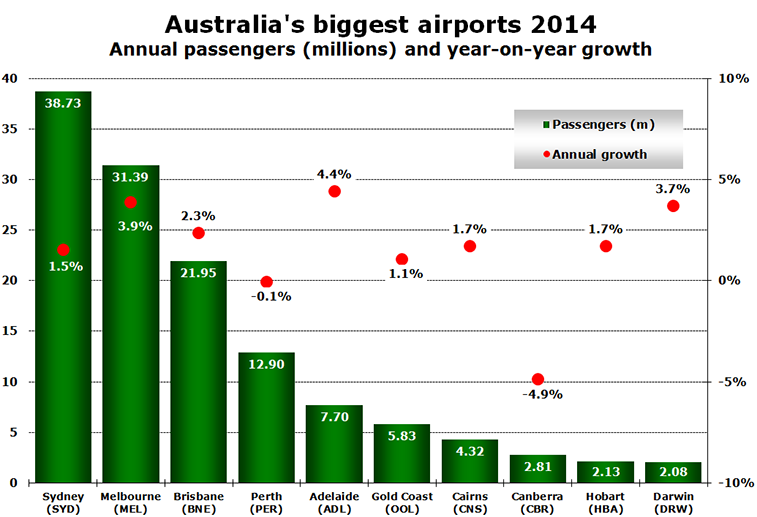 With two airport’s posting annual traffic declines (Perth and Canberra) from the top 10, only four posted figures above the average growth achieved amongst Australia’s biggest airports (which was 2.1%) – these were led by Adelaide (+4.4%) and Melbourne (+3.9%), and completed by Darwin (+3.7%) and Brisbane (+2.3%) airports. Adelaide’s table topping performance was driven by a 2.4% increase in passengers from domestic and regional airlines, while international airline traffic spiked by 21% year-on-year.

Due to the often massive distances involved, for example between Sydney and Melbourne (the top city pair) it is 705 kilometres, air travel is on many occasions the only viable domestic transport available. As a result, the importance of the Australian domestic market cannot be underestimated. Out of the 36 country markets served from Australia, the domestic market represents 78.2% of total weekly seats for the week commencing 6 April – a figure that however declined marginally over the last 12 months, dropping 0.3% from 78.5%. Since last April one new country market has joined the listing – the Cocos and Keeling Islands ‒ a territory of Australia, located in the Indian Ocean, south-west of Christmas Island and approximately midway between Australia and Sri Lanka. 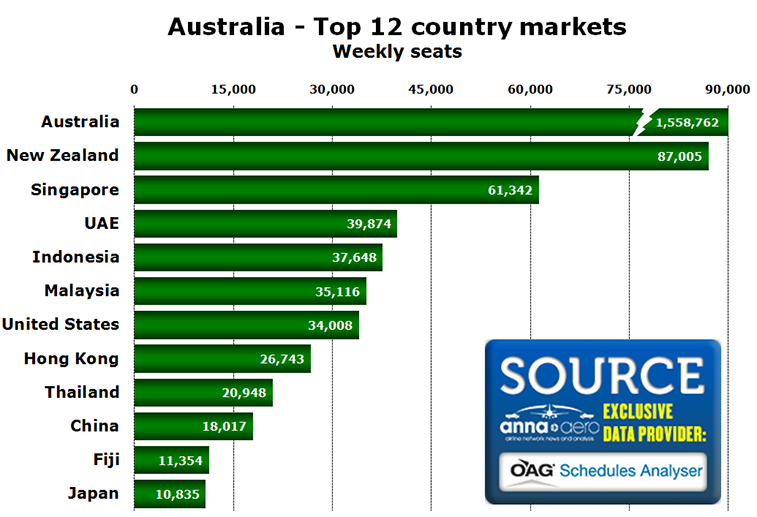 Total seats across all country markets for the week in question have fallen by 1.6% since last April. The top 12 country markets command 97.5% of the total, down marginally from the 97.7% recorded a year ago. The Australian domestic market is down 2.0% year-on-year, however the country pair to Malaysia has suffered the biggest annual decline, dropping by 18% since last April. This drop has seen Malaysia drop from the fourth spot it held a year ago, and with weekly seats increasing from both UAE and Indonesia, the two country markets have leapfrogged the South East Asian nation. The country market to Fiji has witnessed the fastest growth in the past year, growing by 22%, which is more than double the increase experienced by the second fastest growing market of Japan (+9%).

The city pair between Melbourne and Sydney, which is the world’s fourth largest route in terms of weekly seats (behind Seoul Gimpo to Jeju, Fukuoka to Tokyo Haneda and Sapporo Chitose to Tokyo Haneda), has encountered a 2.7% drop in its weekly seats since last April. That said, the total number of weekly seats offered by the top 12 routes has hardly changed at all over the last year, with only 418 seats (exactly 0.1% of capacity) having been trimmed. 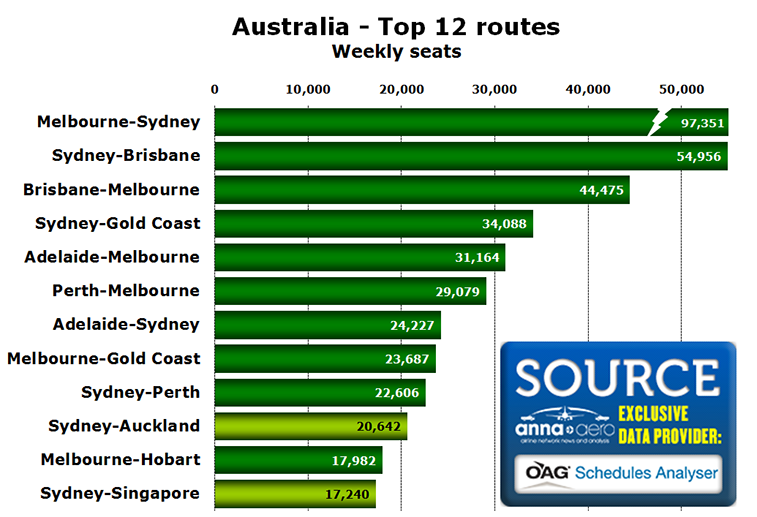 The top 12 routes offer just two international sectors (highlighted in light green), both of which also posted annual falls in weekly seats. Indeed, the Sydney to Singapore city pair is the worst offending of the top 12, decreasing by 8.5%. The Melbourne to Gold Coast route has experienced the biggest yearly growth (+11.7%), beating off similar double-digit competition from the Adelaide to Melbourne route (+10.2%).

For the data hungry amongst you…

If the Australian market is of interest to you, you will be pleased to know that anna.aero now tracks the monthly statistics of the biggest 46 Australian airports (and the biggest four airports in New Zealand too) thanks to our most recent addition to our Mind-Blowing Databases section on our website. Still being developed, the Rest of the World database currently offers monthly data from over 130 airports from around the world (excluding Europe and the Americas – which have their own databases).