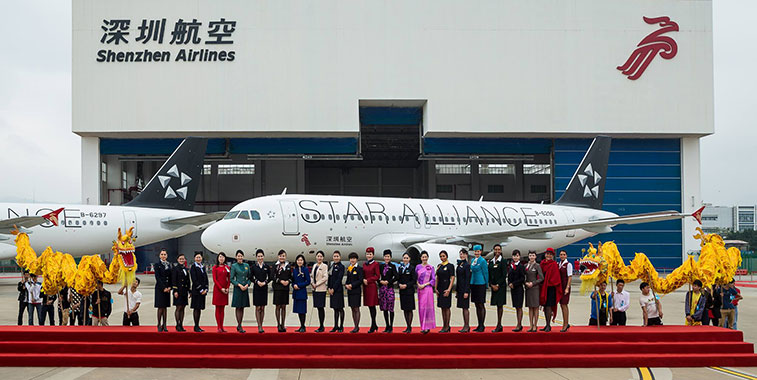 Last August, Shenzhen Airlines celebrated its first aircraft painted in the Star Alliance livery during a special event held at Shenzhen Airport. The airline officially joined the Star Alliance in August 2012, becoming the alliance second Chinese member at the time following the departure of Shanghai Airlines in 2010 (the first Chinese member being Air China as of 12 December 2007).

Founded in November 1992, Shenzhen Airlines is a Chinese domestic and international carrier based unsurprisingly at Shenzhen Airport (also known as Shenzhen Bao’an International Airport). On 6 July 2011, Shenzhen Airlines was formally accepted as a future member of Star Alliance, while on 29 November 2012, the carrier officially joined the alliance becoming its second Chinese member at the time following the departure of Shanghai Airlines in 2010 (the first Chinese member being Air China as of 12 December 2007). With nearly 613,000 weekly seats (according to OAG Schedules Analyser data for the week commencing 24 March 2015), the airline has managed to establish itself as the fourth largest operator in China, below Air China (1.3 million seats), but just above Hainan Airlines (605,868). As part of its current fleet, Shenzhen Airlines operates 153 aircraft, namely 83 737s (74 737-800s, five 737-900s and four 737-700s), 65 A320s and five A319s (according to Planespotters.net).

Shenzhen accounts for 19% of weekly departures

Analysis of the carrier’s current network indicates that the Star Alliance member operates to a total of 69 airports. As a matter of fact, Shenzhen Airlines’ top dozen airports account for 59% of total departures this March, which is down 3% from the corresponding period last year. Not surprisingly, considering that the airport is its primary hub, Shenzhen is by far the airline’s busiest airport by weekly flights (19%), posting an 11% increase or an extra 78 weekly departures this March when compared to data from the same period last year. Shenzhen is linked to 54 airports, of which the 1,951-kilometre sector to Beijing is the airline’s most frequently served route, with 52 weekly departures. Ranking second in terms of weekly flights, Guangzhou (one of the airline’s operating bases along with Nanjing, Nanning and Shenyang) offers services to 26 destinations. 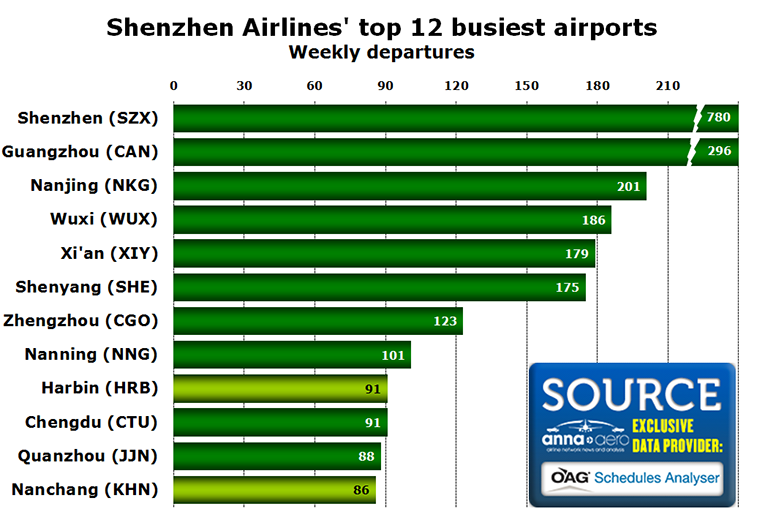 Shenzhen Airlines’ weekly departures are up 19% this March when compared to data from the same week last year, with no airport of the top dozen recording a decline. The fastest growing airport is Nanchang, which is also a new entrant in this year’s ranking, having increased by 91% or by 41 weekly departures over the last 12 months. The airline has expanded impressively at Nanchang, introducing new services to Shenyang, Haikou, Harbin, Zhuhai, Taizhou and Xi’an. Apart from Nanchang, Harbin (both are highlighted in bright green) is another entrant in this year’s ranking, as Shenzhen Airlines has increased its weekly departures at the airport by 57%.

According to OAG Schedules Analyser data for this March, Shenzhen Airlines operates 221 routes, with the top 12 airport pairs accounting for 10% of all weekly seats (representing a decrease of 2% from last year’s figures as a result of the airline diversifying its network). Even though it posted a decrease of 8.3%, the Shenzhen-Beijing route is still the airline’s #1 route in terms of weekly seats in 2015. The airline competes intensively with Air China (65 weekly flights), China Southern Airlines (56 weekly departures) and Hainan (40 weekly services) on this sector. 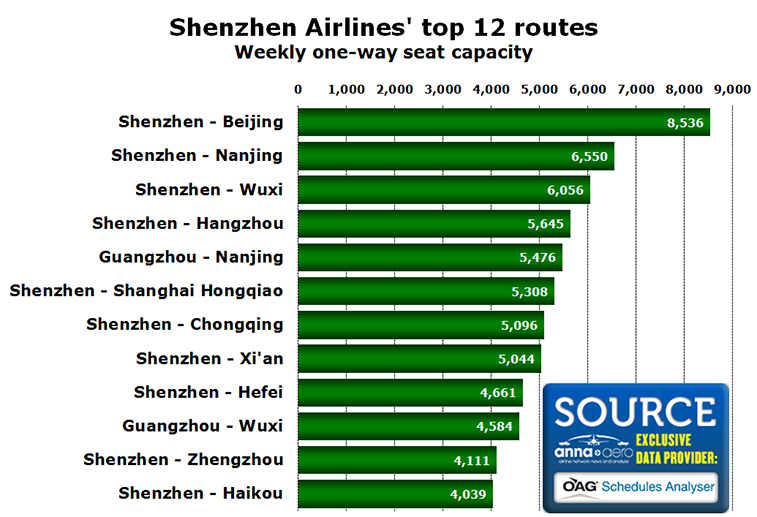 Looking at weekly seat capacity for this March, Shenzhen Airlines posted a double-digit increase of 18% when compared to data from the corresponding week of 2014. While the Shenzhen-Hefei route is the fastest-growing airport pair (+30%), this year’s top position has provided the biggest capacity decline (-8.3%). This has come as a result of the carrier having reduced its frequency on the sector from 56 times weekly to 52 times weekly over the past 12 months. Overall, seven of the top dozen routes posted capacity growth, while the Shenzhen-Nanjing and Guangzhou-Wuxi links have seen their operations unchanged.