Barra beach landing; flying on one of the world’s most exciting runways 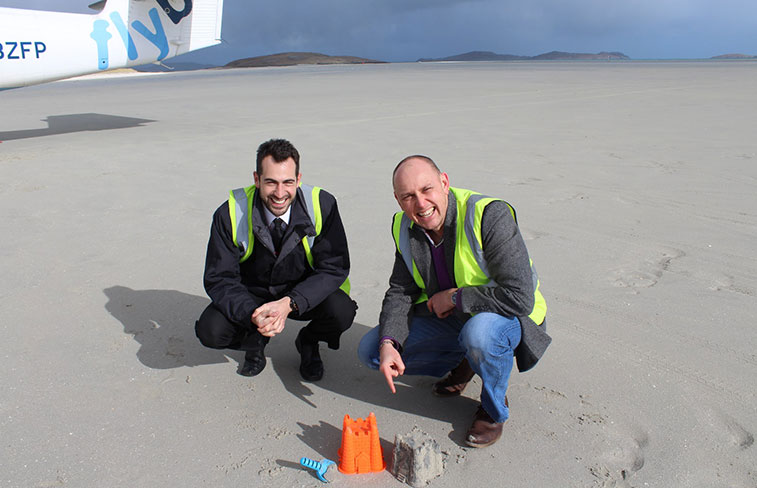 How many runways around the world can you build sandcastles on? I can tell you – not many, maybe even just one! But that is exactly what anna.aero’s Editor Marc Watkins did (right) – with a bit of architectural advice from Loganair’s First Officer Steve Waddell on the beach runway on the island of Barra in the Scottish Outer Hebrides, a group of islands just off the north-west coast of Scotland.

The first thing to say about this trip is that is very nearly never happened. In nearly 20 years of working in this industry and having made hundreds of flights for business, I have never, ever missed a flight. On that Thursday morning fate conspired against me – and I was going to miss the first leg of this exciting journey, possibly rendering the other flights worthless (I was later to find out that there was another Flybe flight at 1010 that would have allowed me to still do the other three sectors). Well I say fate, it was really an accident forcing a lane closure on the two-lane M42 motorway combined with over-running night road works further down the same motorway that meant that I didn’t arrive at Birmingham Airport (BHX ‒ my old stomping ground) until 0855 ‒ the exact time my Flybe flight to Glasgow was due to depart. During my cross-country journey on the back roads I learnt so well during my 11 years at BHX, I made several frantic phone calls (hands-free of course) to an ex-colleague, who helped me out to basically dump my car outside the airport’s management offices and sprint for security. This same ex-colleague spoke to people in the Airport’s Control Centre (ACC), who then rang security, who then rang the gate to tell them I was coming, dashing with lap-top and belt still in hand.

So why fly to Barra? The truth is down to some Saturday night TV channel hopping. On this particular night I did something that I never do – watch a show about my own industry. My wife has banned me from doing this, as I normally just shout at the TV saying things like ‘that would never happen’ or ‘why have they used footage of a 737 instead of an A320’, whenever I have done this in the past. However, this evening I happened upon ‘World’s Most Extreme Runways’ and found it very interesting (and there was minimal shouting). One of the top five most extreme runways was the fabled beach landing on Barra. At that moment I decided – I need to do that. And after several begging e-mails…the trip was arranged. 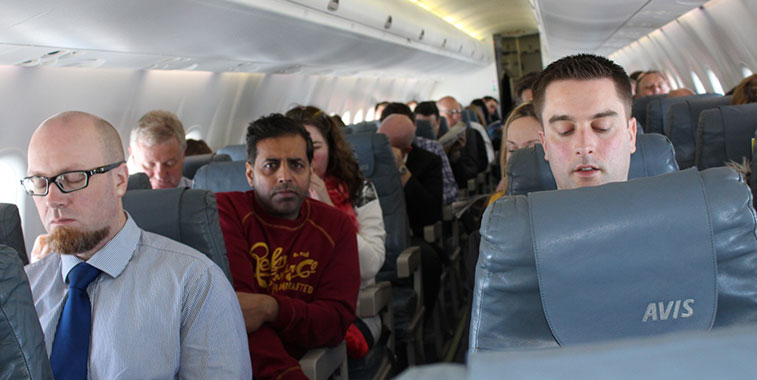 Pushing back at 0909 (so still technically on-time despite having to wait for anna.aero’s Editor to get on board) there were 61 passengers on board the Flybe Q400 flight BE784 from Birmingham to Glasgow – the second flight of the day between the two cities – that’s an impressive 82% load factor (return leg, BE791 had 64 on-board ‒ an 86% LF). There would have been 66 passengers (89% LF) if five other passengers hadn’t ‘FTJ’ (failed to join – an acronym I learnt on this trip), presumably stuck in the same motorway traffic that nearly stopped this trip from happening. Thank you to my fellow 60 passengers who confined their disdain at my late arrival on the aircraft to merely withering looks rather than any verbal abuse. I did apologise to the whole cabin behind my seat (11D) for my tardy arrival – with no perceptible response. Despite the delay, flight BE784 arrived at 1008…seven minutes ahead of schedule – thank you for exaggerated block times. 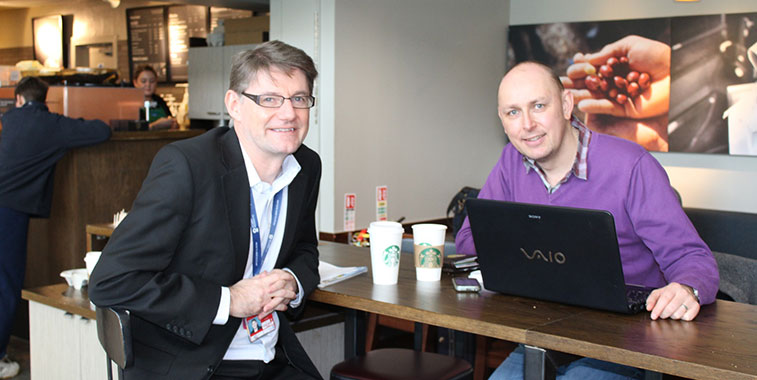 While on the ground for three hours between flights, I took the opportunity to catch up with Glasgow Airport’s Business Development Manager, Paul White. For a full report on this and the airport’s plans for Routes Europe and aspirations for 2015, take a look at our 30-Second Interview section. 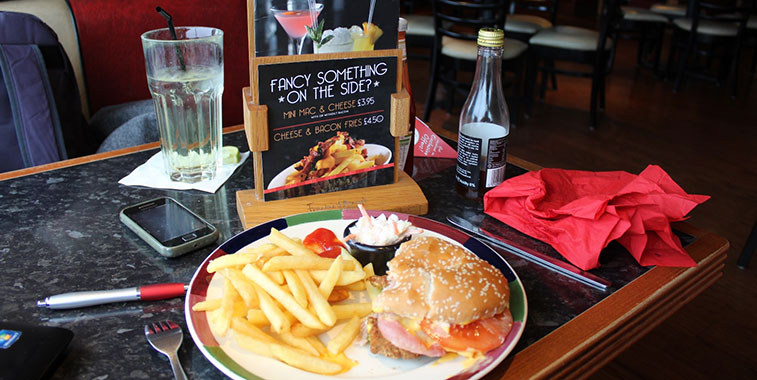 Lunch was taken in Glasgow Airport’s Frankie & Benny’s restaurant – with great airside views – including the Loganair Twin Otter (Twotter) that would be taking me up to Barra. Observed from this vantage point (while enjoying the pictured Chicken Philly Burger) were the likes of Emirates, Icelandair, easyJet and Ryanair amongst other movements. A brief walk out across a gusty apron from Gate 3, me and the nine other passengers found our ride up to Barra – G-BZFP (Foxtrot-Papa). The 19-seat STOL aircraft was designed for this type of mission. No tug required. Following a safety briefing from First Officer Steve Waddell (no cabin crew), Foxtrot-Papa’s commander, Captain Peter Finnie pushed the aircraft back himself (with the reverse thrust). We trotted out behind flight EK28 bound for Dubai. It’s take off run was considerably longer than the 18 seconds it took in the Twotter. 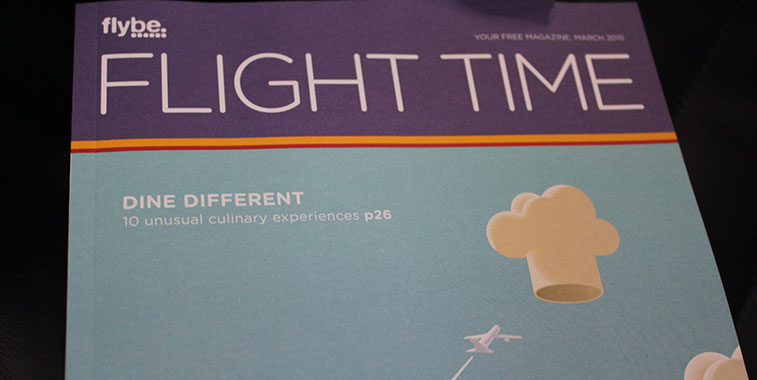 What no on-board Wi-Fi? What no IFE? That was not strictly true – as there was the Flybe inflight magazine. 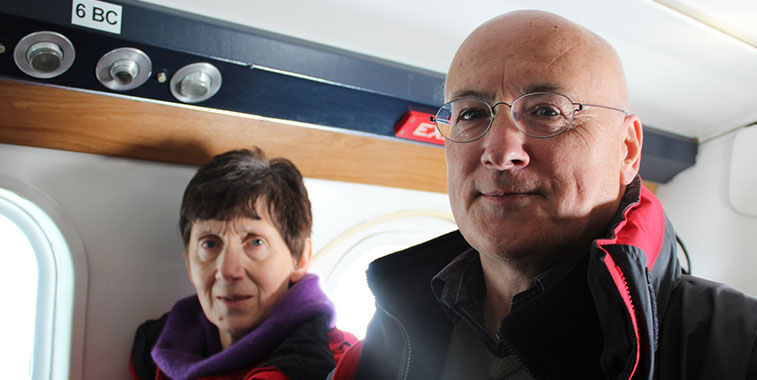 No suits on board. On the flight was a mixture of people returning home to the island and those going to experience its beauty ‒ like David and Agnes Burnie from Galashiels in the Scottish Borders, who were going to Barra for a walking weekend. Flying on a Twotter is a bit of contrast to their last flight – an A380 to Australia! 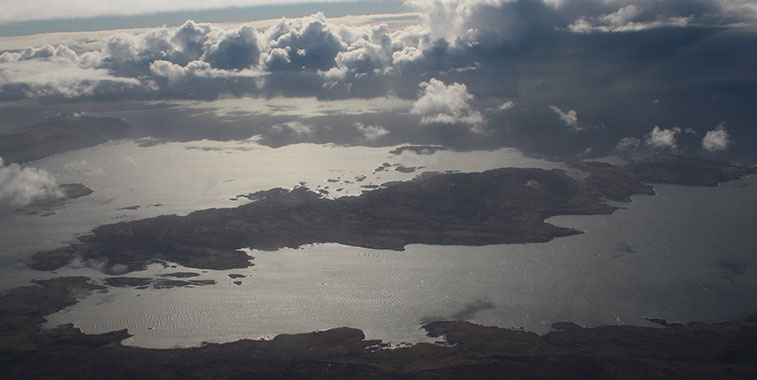 Sitting in seat 5A, it’s the kind of flight where doing any work, or even reading a book would be deemed a sin. You must just sit back and enjoy the ever-changing views. Once at cruising altitude of 10,000ft (around 3,000m) it was smooth flying despite the headwinds which the crew informed me had reduced our ground speed to just 90kts. As a result, we began our descent about 15 minutes behind schedule. The aircraft touched down on one of Barra’s three runways (more than they have at London Heathrow) – with 15-33 being the chosen strip today (11-29 and 07-25 were not in use however). There was still plenty of water on the runway as we gently splashed down with the welcome of glorious sunshine. T5 it ain’t. As you would expect the terminal at Barra is functional and friendly rather than being ornate and overwhelming. With its return load of 16 passengers (84% LF) safely on board the door was shut at 1500. Capt. Finnie and FO Waddell back-tracked the aircraft to the threshold of R33, dispersing the oyster catchers patrolling the beach (one of which had secured its mid-afternoon tea). After a 15-second take-off run, Foxtrot-Papa leapt into the air back to Glasgow. Is that the Bahamas down there?? Again in the cruise at 10,000ft, the aircraft’s ground speed, now with a healthy tailwind, sneaked past 200kts (and reduced the block time to just 52 minutes on the return leg). As I was now known to the flight crew, and as I was sitting in seat 1A, I was given a headset and chatted to Captain Finnie and First Officer Waddell throughout the flight back to Glasgow – yet again something just not available on 99.99% of commercial flights. Sights on the return trip included Loch Lomond. 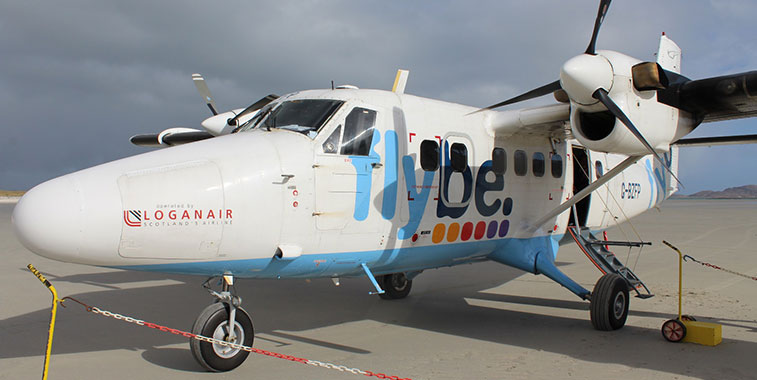 According to the flight crew Foxtrot-Papa will soon be leaving the Loganair fleet, as it and its sister ship (G-BVVK) will be replaced by two new-build Twotters fresh from Canada by the end of May this year. However, Victor-Kilo will be kept on as an operational spare. The fate of Foxtrot-Papa is unknown. 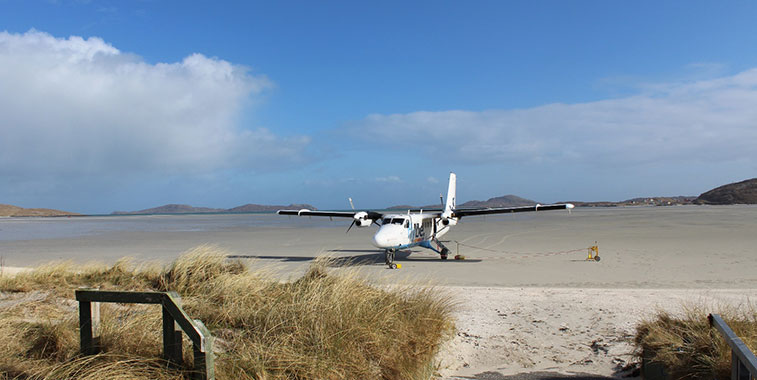 Things that make this a truly unique flying experience: the safety briefing by the First Officer; the aircraft type and its performance (even the trickle of water that came from the cabin roof was fun – on another flight, say on a 737, it would have just irritated me); the en-route scenery; and of course the once in a life time opportunity to land on a beach (on purpose) on a commercial flight. If you get the chance to go on a flight like this, don’t deliberate – do it!

Thanks and respect are due

Lastly some thanks are due. Thanks to Flybe’s and Loganair’s respective media and management teams for allowing this to happen in the first place. I hope you like the end product. However, the biggest ‘respect’ has to go out to friends, ex-colleagues, and Flybe’s handling agent staff (Swissport) at Birmingham for getting me on the first leg of this journey. You know who you are, and as a professional journalist I would never reveal my invaluable ‘insider’ sources that got me on that flight. Special thanks also go out to Janet, Jimmy and the rest the team at Barra, as well as Captain Peter Finnie and First Officer Steve Waddle. Right then…which one of the world’s most extreme runways is next…