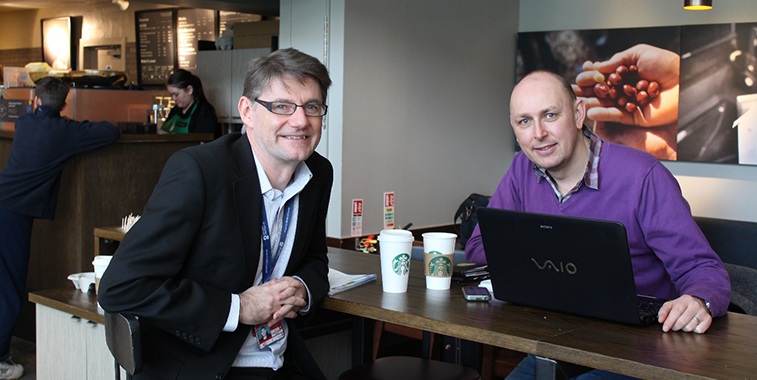 If you want to discuss route development opportunities at Glasgow Airport, then Paul White (left), its Business Development Manager, is the man to speak to. While his beverage of choice is a latte, anna.aero’s Editor Marc Watkins (right) learnt that there is certainly no froth in the airport’s recent traffic development – 24 months of consecutive monthly growth is testament to that.

In 2007, the unthinkable happened in Scotland. No, they didn’t run out of IRN-BRU, but Edinburgh and Glasgow (GLA) airports swapped places in terms of annual passenger rankings, with the nation’s capital becoming the biggest airport in Scotland. This period also marked the start of four years of traffic decline at Glasgow, a trend that has now thankfully been reversed in the run-up to Routes Europe in Aberdeen (Scotland’s third largest airport). anna.aero caught up with Paul White, Glasgow Airport’s Business Development Manager to discuss his plans and expectations for this year’s conference.

anna.aero: How have you prepared for Routes Europe?

Paul White: “My focus has primarily been on the meetings and data collection. However, this is the first year that we’ve got our own stand at Routes. One reason for that is because we will be there in force – as we’ll be driving up to Aberdeen! Having a bigger team there to be on the stand frees me up for the meetings themselves. We’ll have whisky-tasting and golf related give-aways and loads of fun stuff on the stand – including a Celtic vs Glasgow Rangers table football and a putting green.”

aa: What are your top 10 most desired air services in Europe?

PW: “It’s a mixture. Connections to unserved hubs like Paris CDG, Munich [we have a weekly, seasonal service this summer, which we’d like to be expanded], Copenhagen and Frankfurt as well as more point-to-point destinations like Milan, Madrid, Pisa, Stockholm and Oslo.”

aa: What have been the key challenges over the last 12 months — and how have you dealt with them?

PW: “If anything, the last 12 months marked a real step change both for the airport and for the city. It’s no understatement to say that the eyes of the world fell on Glasgow as we welcomed tens of thousands of visitors through our doors for the major events such as Commonwealth Games, the Ryder Cup and the MTV European Music Awards. The challenge for us was to ensure we stepped up to the mark and played our part, as for many we were the gateway to the Games.”

“We responded by completing a £20 million terminal investment programme which saw large parts of the airport, including international arrivals, undergo a major makeover in time for the Games. Our route development efforts were also boosted by the focus and profile these events brought to the city and we secured 20 new routes and services during 2014. These included direct flights to Las Vegas, Cuba, Halifax, Bordeaux, Munich and Marrakech. In October 2014, we also welcomed Ryanair on board for the first time and the airline will bring in excess of 850,000 additional passengers per year.”

“Added to all this, 2014 proved to be our busiest year since 2008 and our fourth consecutive year of growth. We finished the year with over 7.7 million passengers, which represented growth of 4.8% on 2013. The challenge is to ensure we continue to enjoy consistent growth and work with our city and national partners to leverage the opportunities that 2014 undoubtedly presented.”

aa: Which two airports are your biggest competitors, and how do you differentiate your product to theirs?

PW: “There are three airports serving the central belt of Scotland, so of course many people would say our biggest competitors are Edinburgh and Prestwick. However, when it comes to competing for new routes our greatest competition will come from our European counterparts. How we differentiate ourselves is by working very closely with our city and national partners to develop compelling propositions for airlines, and Glasgow has a great story to tell.”

“There are many reasons why airlines want to fly to Glasgow – a city described as the economic powerhouse of Scotland. As Scotland’s largest city, it makes the highest contribution to Scottish GVA of any Scottish city. Glasgow also has over 30,000 registered businesses, 17,000 of which are private registered with an annual turnover of £31bn. These businesses are drawn from varied sectors including manufacturing businesses such as whisky producers and specialist engineering companies, to key international brands in the banking and assurance industries, such as JP Morgan and Morgan Stanley.”

“Glasgow also serves as the gateway to the Highlands and Islands. Loch Lomond and the Trossachs National Park are on our doorstep and some of Scotland’s best golf courses including Gleneagles and Turnberry are within 50 miles, so we are well positioned to grow.”

aa: While domestic route growth is good, are you keen for more international service to GLA?

PW: “Despite our comprehensive UK market [Flybe is starting Bournemouth and Cardiff this summer] coverage we believe there is still some domestic potential out there. For example, we believe that there are some 600,000 people per year using the train from Glasgow to London. With a minimum of a four-hour journey by rail, a day trip is therefore impossible. Loganair is still growing to the Scottish Highlands and Islands, with services to Islay, Shetland and Tiree all increasing this summer as the economy improves. That said, we are still pushing hard on international opportunities, despite our new routes this summer.” 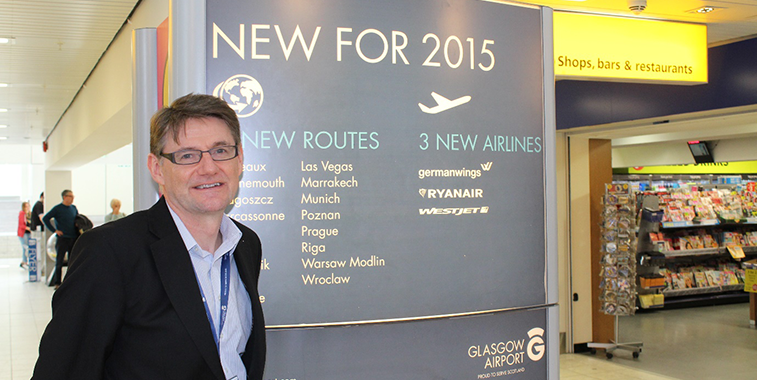 Banner of success. Paul White is happy to promote Glasgow’s 17 new routes and three new airlines for the S15 season. Growth is coming from all sectors and markets – low-cost (easyJet and Ryanair), long-haul (Virgin Atlantic Airways and WestJet) and legacy carriers (Lufthansa).

aa: Are you happy with your traffic mix – legacy carriers vs LCCs?

PW: “I am actually. We see this as one of our key strengths as we’re not dominated by one sector. We have new low-cost with the likes of Ryanair and Wizz Air, and we still have a lot of charter, in addition to traditional short- and long-haul scheduled.”

aa: 24 consecutive months of growth, double digit passenger increases in January and February – your annual bonus will be healthy this year? Seriously though, are the dark years of 2009 and 2010 (traffic plummeted to 6.53 million) behind you?

PW: (He laughs loudly at the part of this question). “I’ve been here through the whole thing [White has been at GLA for the last 10 years] ‒ the fall and the rise again. Despite the recent figures we never get complacent. It’s challenging when the numbers are going down…and it’s the same when you are growing!!”

aa: What are your aspirations for 2015 in terms of passenger figures, further route development etc?

PW: “Clearly, we want to maintain our trend of sustained passenger growth but we’re under no illusion that it will be challenging. However, with Ryanair now on board and having secured 20 new routes and services we expect our passenger numbers for 2015 to step comfortably above eight million. There are also a number of major events in the pipeline for 2015. We’ve already hosted the Davis Cup and we still have the Turner Prize, the IPC Swimming World Championships, the World Gymnastics Championships, as well as a number of major business conferences still to come.”

aa: Do you think the Scottish Central Belt would be better served by one big airport (presumably at GLA in the middle) rather than having Glasgow Prestwick, Glasgow and Edinburgh?

PW:  “I’ve heard people say that if you were to start again you would perhaps have one big airport in the middle of the Central Belt, however, we are where we are. We benefit from serving a catchment area of 2.2 million people and our priority is to ensure we continue to secure the routes and services that will persuade more and more people to fly to and from Glasgow.” 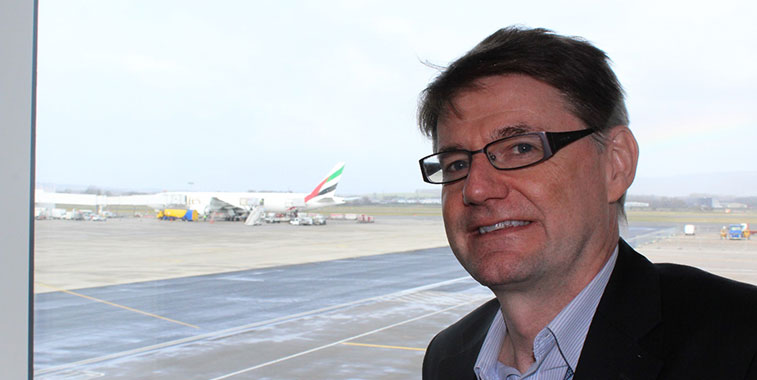 Keeping an eye on the Crown Jewel. While the double-daily Emirates 777-300 service to Dubai might be Glasgow’s flagship route, the airport has a healthy mix of traffic covering all sectors – charter, low-cost, short- and long-haul scheduled.