Edinburgh Airport celebrates one new airline and three new services at the start of the summer season. Atlantic Airways began flights to the Faroe Islands while existing airlines Norwegian and SAS expanded their Scottish networks with routes to Malaga and Copenhagen respectively. Airport CEO Gordon Dewar managed to make it to two of the launches. Last year Edinburgh passed the 10 million passenger mark for the first time, the first Scottish airport to reach that milestone.

Having voted by a narrow margin last September to remain part of the UK, Scotland saw its airports report passenger traffic growth of just under 4% in 2014, with the top four airports handling around 22.5 million passengers, almost exactly the same as in 2005. However, among the four busiest airports in Scotland, fortunes have varied during that period with Aberdeen (host of the upcoming Routes Europe event) reporting 31% growth and Edinburgh growing by 20% (and passing 10 million passengers for the first time in 2014), while Glasgow  has reported a 12% fall in passenger numbers during the same period with Glasgow Prestwick (a Ryanair base) down 62%, and falling below the one million passenger mark in 2014 for the first time since 2000. 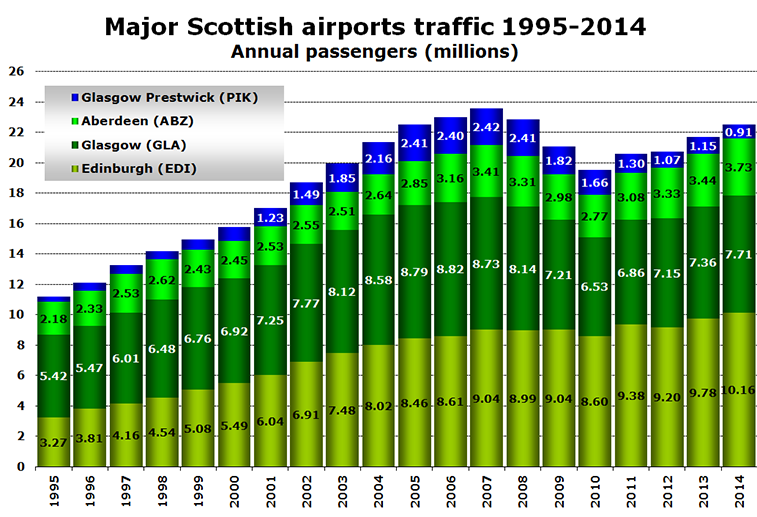 In the first two months of 2015 these four airports continue to experience varying fortunes. Edinburgh’s traffic is up just over 7%, while Glasgow’s is up an impressive 12%, benefitting from Ryanair’s decision to open a second Glasgow base last October, transferring some of its flights and capacity from Prestwick. This has resulted in Prestwick’s traffic falling around 60% year-on-year in the early part of 2015. Aberdeen’s traffic is basically flat so far this year, with fifth ranked Inverness performing well, with passenger numbers up around 25% thanks in part to new daily flights to Dublin and London City offered by Flybe.

Flybe offers most weekly flights from Scottish airports this summer

Analysis of schedule data for the first week in August reveals that Flybe offers over 150% more flights from Scottish airports than its nearest competitor (easyJet), though many of them are operated on its behalf by local carrier Loganair. The Scottish carrier also still operates a number of inter-Orkney Island routes under its own name using Britten-Norman Islanders. These flights range in sector length from just two kilometres (between Westray and Papa Westray) to 53 kilometres (between Kirkwall and North Ronaldsway). Another carrier operating a significant Scottish network with aircraft of 50 seats or fewer, is Eastern Airways, which flies a mix of predominantly Jetstream 41s and Saab 2000s. 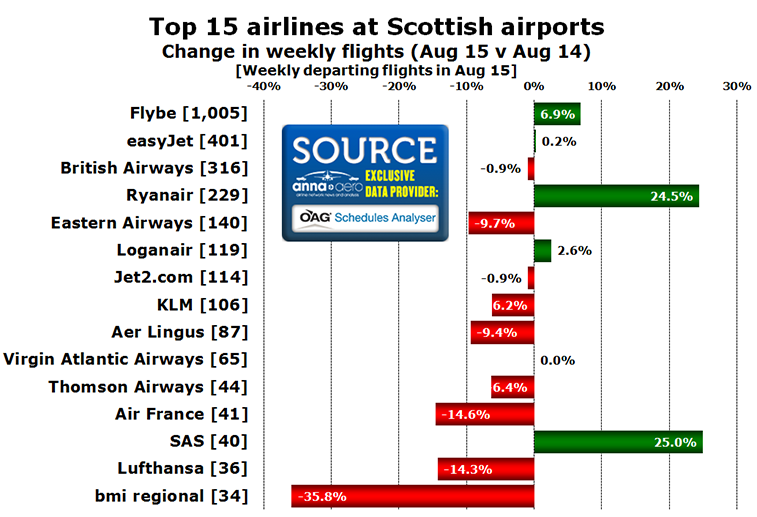 The leading carrier from mainland Europe is KLM, which connects Aberdeen, Glasgow and Edinburgh to its hub in Amsterdam with multiple daily flights. Virgin Atlantic Airways’ ranking has little to do with its traditional transatlantic services (it flies twice-weekly from Glasgow to Orlando), but much to do with its soon-to-end ‘Little Red’ domestic flights (operated on its behalf by Aer Lingus) connecting Aberdeen and Edinburgh with the airline’s main hub at London Heathrow.

In terms of weekly seat capacity from Scottish airports easyJet (with its larger aircraft than Flybe) is around 20% bigger than Flybe, with British Airways (BA) and Ryanair not too far behind. BA only operates routes from Scotland to three London airports; Gatwick, Heathrow and London City. Ryanair’s significant capacity growth is less to do with its Glasgow operations (which have seen a shift rather than a growth in capacity), but more to do with the airline’s decision to launch multiple-daily domestic flights last October between its Edinburgh and London Stansted bases. 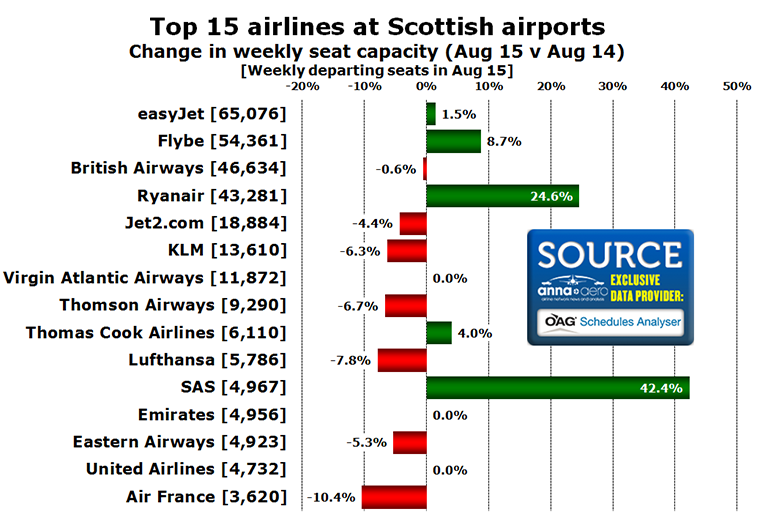 Two airlines operating purely long-haul flights from Scotland make it into the top 15, with Emirates (12th, double-daily flights from Glasgow to Dubai) beating United Airlines (14th, Edinburgh to Chicago O’Hare and New York Newark, as well as Glasgow to Newark).

The leading non-Scottish airports served from Scottish airports are, not surprisingly, mostly in other parts of the UK. Eight of the top 10 routes are to airports in England, five of them in London. The leading non-UK destinations (shown below in bright green) are Amsterdam, Dublin, Palma de Mallorca and Paris CDG. The only long-haul destination in the top 10 of non-UK destinations is Dubai, which ranks eighth, behind Malaga and ahead of Copenhagen. 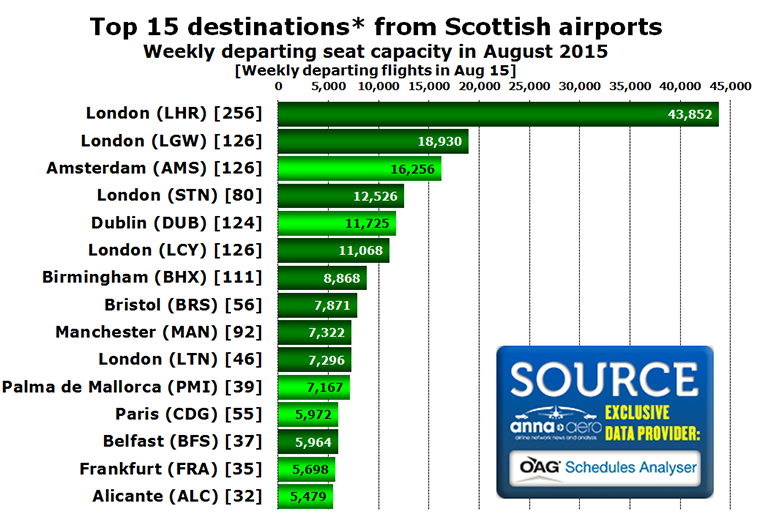 Over 40 airlines offer scheduled services from Scottish airports this summer. While 2014 saw the arrival of airBaltic, CityJet, Citywing and Qatar Airways, this summer has already seen the arrival of Iberia (taking on easyJet on the Edinburgh-Madrid route) and Atlantic Airways to the Faroe Islands, with Etihad Airways and WestJet coming soon. The MEB3 carrier will begin daily Abu Dhabi to Edinburgh flights on 8 June, while Canadian LCC WestJet plans to start operating a daily Glasgow to Halifax (Nova Scotia) service on 29 May. This 4,218-kilometre route will be operated by the airline’s 737-700s. Additional new services already launched this summer (or coming soon) include: 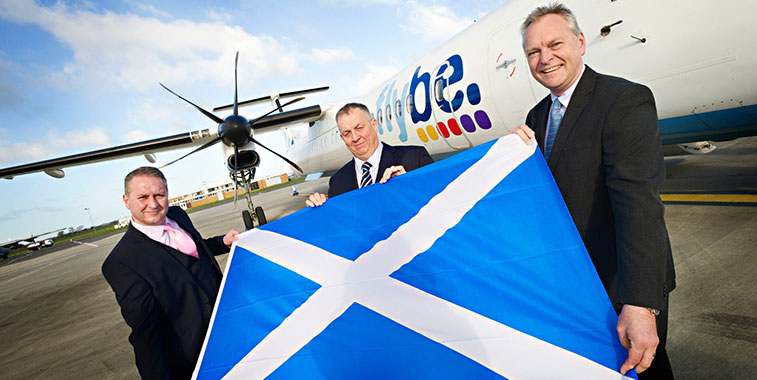 On 30 March Flybe, Scotland’s busiest airline in terms of weekly flights this summer, launched a 12 times weekly service between Bournemouth and Glasgow using the airline’s Q400s. Flybe’s Regional General Manager UK (South), Paul Willoughby and Bournemouth Airport MD, Paul Knight celebrate the new flight with Ian Girling, CEO of the Dorset Chamber of Commerce and Industry. In June Flybe will further increase its footprint in Scotland by launching flights from both Glasgow and Edinburgh to Cardiff in Wales.