Loganair’s longest route, flown as a franchise partner of Flybe, is the 549-kilometre route between Dundee and London Stansted which launched on 30 March 2014, operated by one of Loganair’s Dornier 328s. Celebrating the launch last summer were Loganair’s COO Phil Preston and London Stansted Airport’s Head of Terminal Neil Banks. Accompanying them were TV personality Lorraine Kelly (in the blue top), and The Beano’s Dennis the Menace (in the red and black striped top).

Scotland’s Loganair can trace its origins back to 1962 which makes it one of the UK’s oldest airlines still operating under its original name. In recent years, the airline has operated as a franchise carrier, first for British Airways and more recently for Flybe, as well as maintaining some services in its own name. For most of the last decade passenger numbers have hovered around the half million mark, but in 2014 the airline carried more than 600,000 passengers for the first time. During the same period, the average annual load factor has risen from around 55% to 65%. 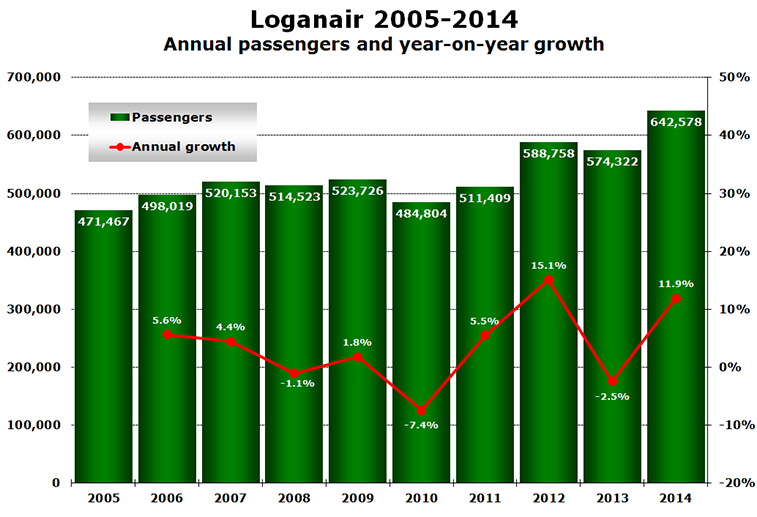 Glasgow is #1 base for Loganair’s franchise flights

The majority of Loganair’s flights are operated on behalf of Flybe under a franchise agreement. According to OAG schedule data for this summer, Loganair will be operating over 600 weekly flights under this arrangement across 25 airport pairs involving 19 airports in Scotland and England. By far the biggest base is Glasgow where Loganair flies 120 weekly departures across 10 destinations, with the furthest destination being Sumburgh, a flight of around 480 kilometres. Apart from Scottish destinations, Loganair also operates flights to Leeds Bradford and Manchester from Glasgow. 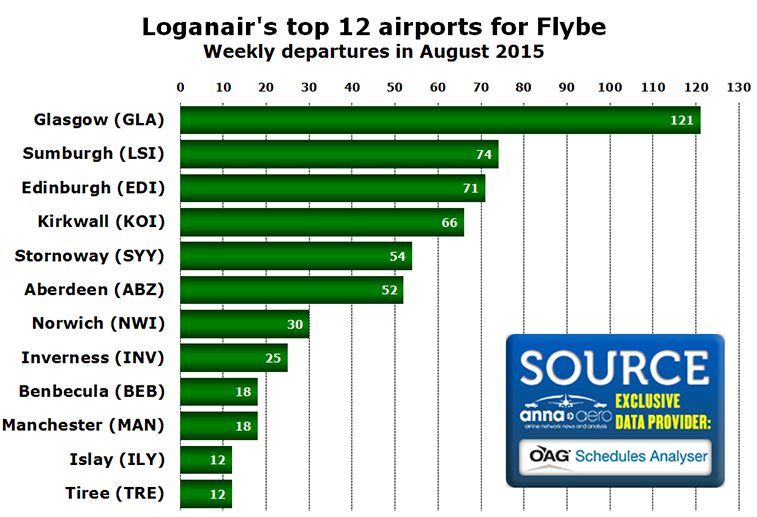 Among the airline’s other served airports is Barra, which is famous for its runway basically doubling as a beach. Our intrepid Editor, Marc Watkins, recently visited the airport to experience the novelty for himself.

At a route level, Loganair’s 31 weekly flights between Aberdeen and Sumburgh are its most frequently served market, with six other routes served with at least twice-daily flights. The highest frequency service involving a point outside of Scotland is the airline’s 17 weekly flights between Edinburgh and Norwich. At 549 kilometres, the Dundee to London Stansted service is the airline’s longest, flown 11 times weekly by its Dornier 328s. 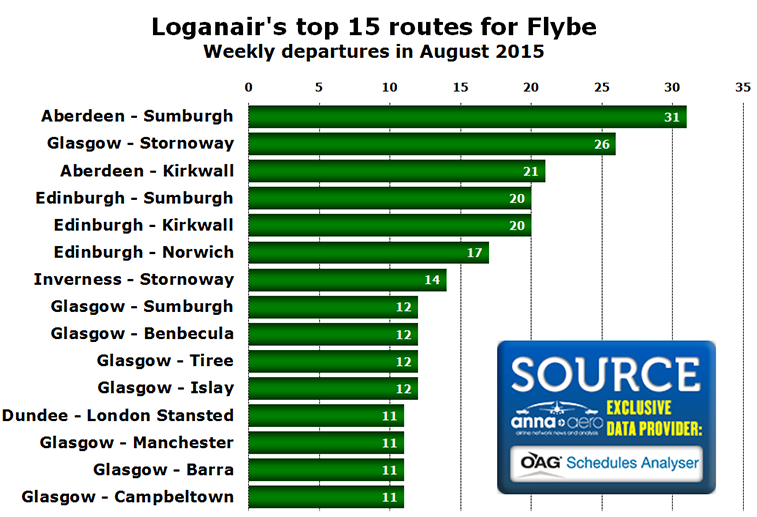 Loganair’s own flights are between just two and 53 kilometres

Loganair’s own branded flights are all operated by its Britten-Norman Islanders. The following table summarises these operations as of this August. The airline’s network involves flights from Kirkwall going round in a loop stopping off at various airports along the way, depending on the time of day and day of week. 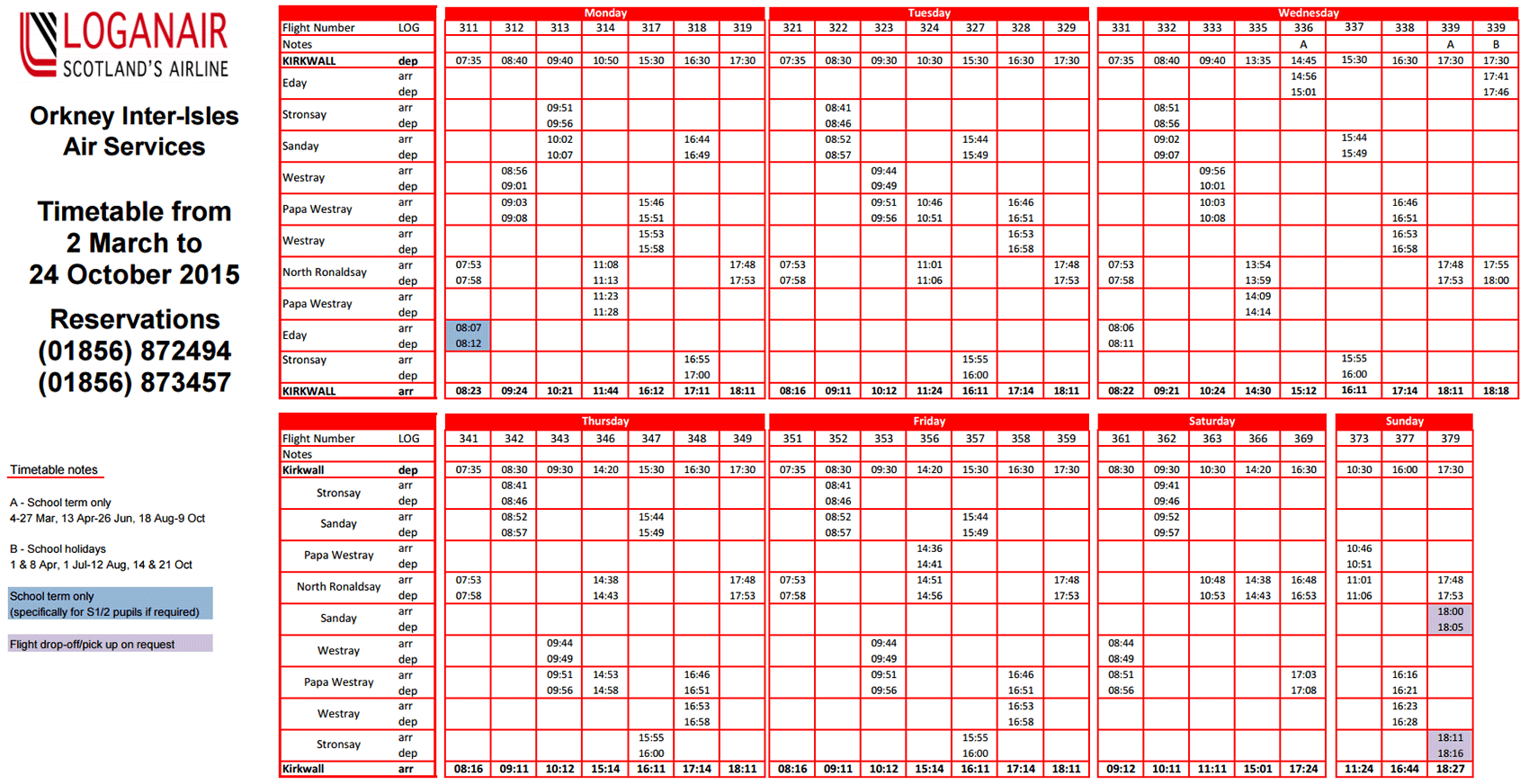 Loganair’s own-branded Orkney inter-island services schedule for this summer includes the two kilometre, two minute Westray to Papa Westray service. Not many airlines offer a “Flight drop-off/pick up on request” service, as seen here on a Sunday evening. Nice! (Click to enlarge).