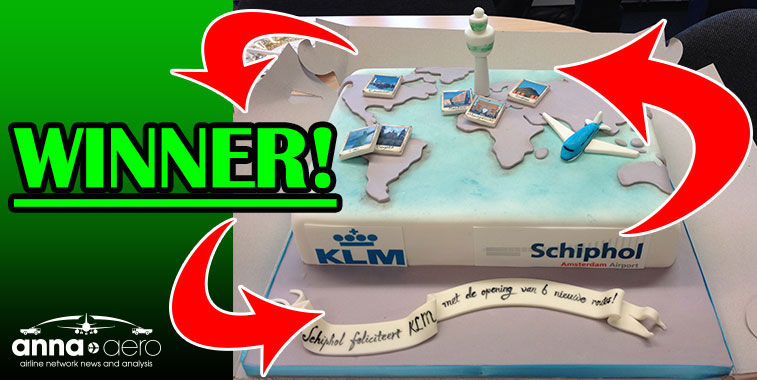 Having accumulated nearly 1,300 votes (just 100 less than Part I winners Tampa) in the S15 Part II competition over the last seven days, this awesomely audacious baking extravaganza from Amsterdam ripped apart the competition to secure anna.aero’s sought-after Cake of the Week certificate. It was done at a canter as well, as the Dutch mega hub posted nearly three times as many votes as second placed Gold Coast Airport from Australia.

Close to 50 cakes have been virtually dribbled over by our readers over the last two weeks, the first two of the S15 season, casting nearly 6,500 votes, which have been meticulously counted and adjudicated by our cake-fuelled data elves. In Part II – the cakequel ‒ of the 2015 (northern) summer season the Dutch masters were at work, resulting in Amsterdam coming away with the highly-coveted Cake of the Week certificate. The win marks a great couple of weeks for the European global hub, as the airport also secured the Fire Truck Water Arch Part I competition a week earlier. The airport received its ‘Arch of Triumph’ certificate last week, in person, from anna.aero’s Vlad Cristescu.

Want some more hard core route development cake action? Send in your new route cakes to the anna.aero team every week – when your baked testaments to bold network planning decision making will be judged by our in-house data elves who need constant feeding on sweet treats in order to power their huge brains.

AMS Awards Cake of the Week