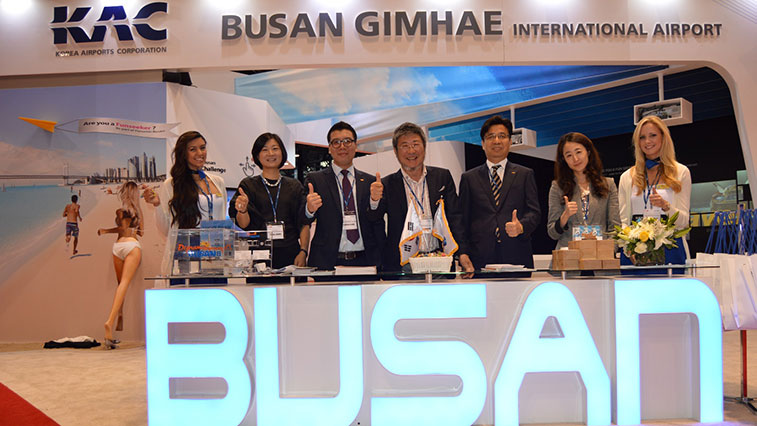 Busan’s Gimhae International Airport had an eye-catching stand at last year’s World Routes Event in Chicago. In 2014, the airport passed 10 million passengers for the first time and has seen traffic grown by 50% in the last five years.

Located on the south-eastern tip of South Korea, Gimhae International Airport serves the country’s second largest city, Busan. Last year the airport topped the 10-million passenger mark for the first time, recording growth of 7.3%. In the five years since 2009, when the airport handled a modest 6.9 million, traffic has grown by 51%. It ranks as the fourth busiest airport in South Korea behind Seoul Incheon (45.5 million), Jeju (23.2 million) and Seoul Gimpo (21.6 million). 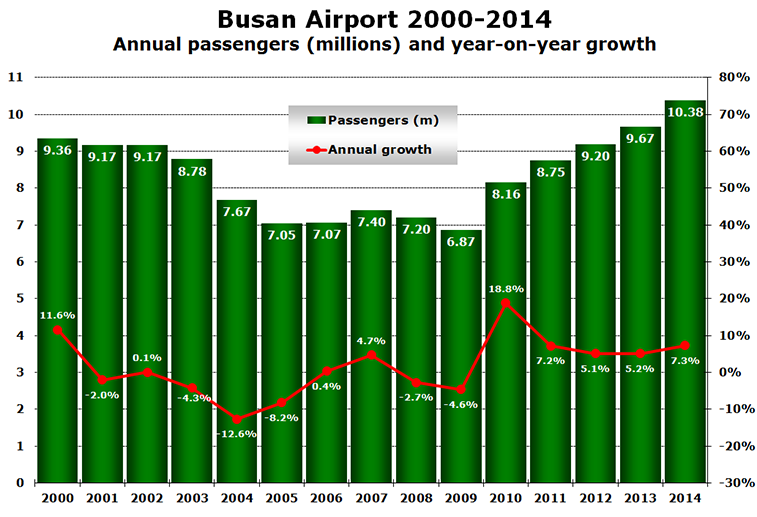 Demand is remarkably consistent across the year with moderate peaks in August and October, but a noticeable dip in September. Despite this the airport scores an “Excellent” 0.34 on anna.aero’s SVID metric. This year has started extremely well with traffic up an impressive 12.4% in the first quarter. Before the end of the year the airport is likely to handle over one million passengers in a month for the first time. 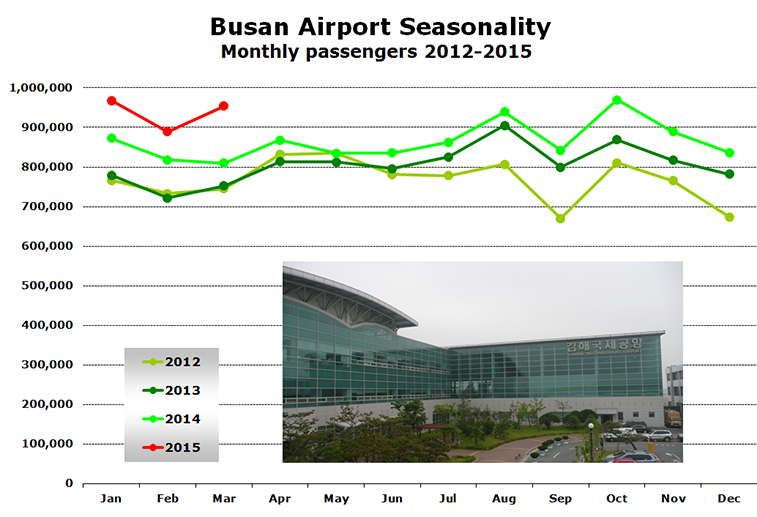 The airport is dominated by two carriers, the national carrier Korean Air, and local rival Air Busan. Between them these carriers account for 66% of all weekly flights and 65% of all weekly seats. Another Korean carrier, Jeju Air, ranks third with around 12% of all seats and flights. Air Busan serves 19 destinations from the airport with non-stop flights, while Korean Air serves 15 destinations. 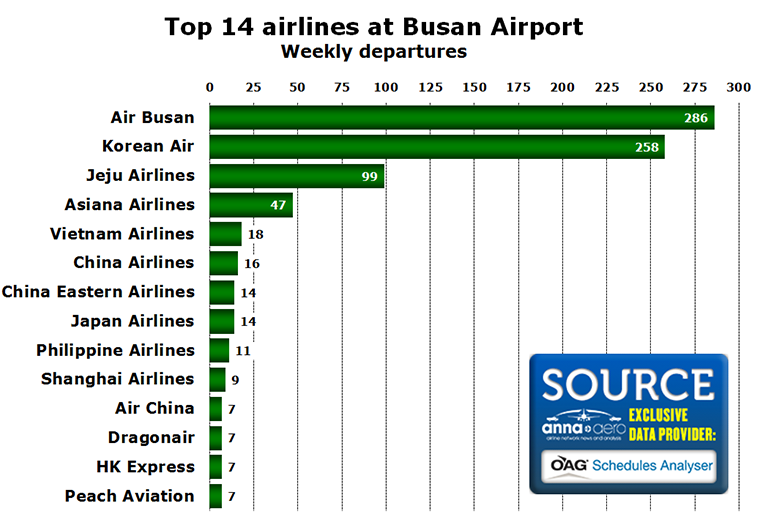 A total of 22 airlines offer scheduled services at the airport at present, including more than one carrier from China, Japan and the Philippines. Ranked outside the top 14 airlines are two AirAsia group airlines (AirAsia X and AirAsia Zest), Thai Airways and Aeroflot, which operates four times weekly to Vladivostok.

Gimhae currently offers scheduled services to 41 destinations, though just two domestic routes (to Jeju and Seoul Incheon) account for 45% of weekly flights and seats. A total of 19 destinations are served with at least daily flights. The furthest destination served non-stop is Kuala Lumpur which is over 4,500 kilometres from Busan. Destinations served this April that were not served last April include four in China (Changsha, Shijiazhuang, Yanji and Zhengzhou), as well as Tokyo Haneda in Japan and Da Nang in Vietnam. Services launched so far in 2015 include Jeju Air services to Fukuoka, Guam, Osaka Kansai and Taipei; and China Eastern Airlines to Qingdao and Yantai. 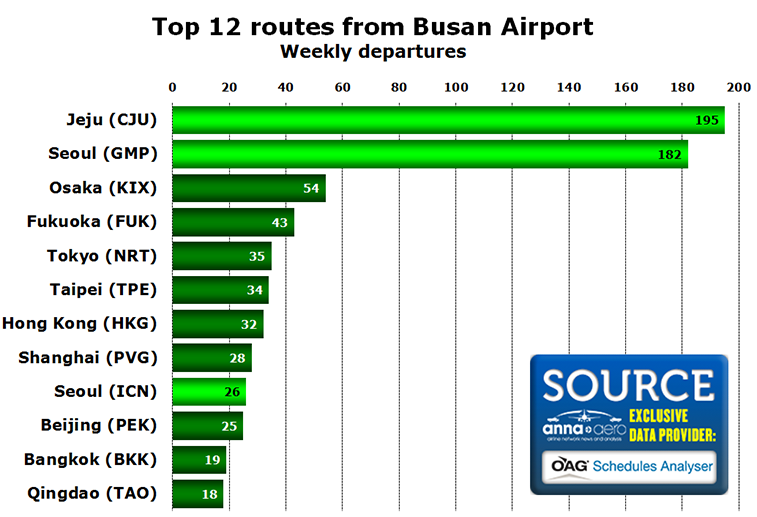 Air Busan launched operations in October 2008 and is a subsidiary of Asiana Airlines. It currently operates a fleet of 14 aircraft comprising six A321s, three A320s and five older generation 737s. According to local news reports, the airline saw revenues increase 26% from US$ 251 million in 2013 to US$ 316.5 million in 2014. As a result, it made a profit of US$ 21 million in 2014 and will become the first Korean LCC to offer a dividend to its shareholders. 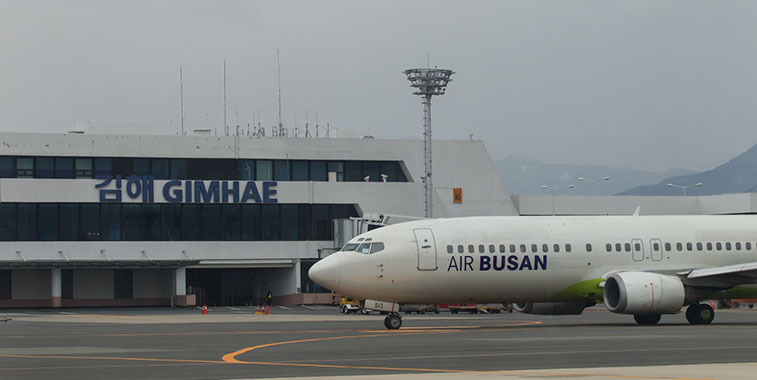 Air Busan, a subsidiary of Asiana Airlines, is the busiest carrier at Gimhae International Airport with almost 300 weekly departures. The airline’s fleet of 14 aircraft comprise a mix of nine A320-series aircraft and five older-generation 737s. It has reportedly been profitable for each of the last five years.