On 11 February, Pittsburgh International Airport welcomed the arrival of Allegiant Air services to Jacksonville, Punta Gorda and St. Pete-Clearwater (all in Florida), with Myrtle Beach services starting in June. Pittsburgh is one of five cities welcoming Allegiant flights for the first time in 2015, the others being Indianapolis, New Orleans, Omaha and Richmond.

Last year Allegiant Air transported just over eight million passengers on scheduled flights, up 13% on its 2013 passenger figures. In terms of annual seat capacity Allegiant ranked only 12th among airlines operating from US airports in 2014 (behind AirTran but ahead of Virgin America), but the airline continues to be one of the world’s most profitable in terms of net margin. Its business model is pretty much unique operating as it does older generation aircraft (MD-80s but now also A319s and A320s plus some 757s) from mostly smaller communities to major US vacation destinations (Florida, Phoenix and Las Vegas), and operating not just very seasonally but also picking its days of operation very carefully. 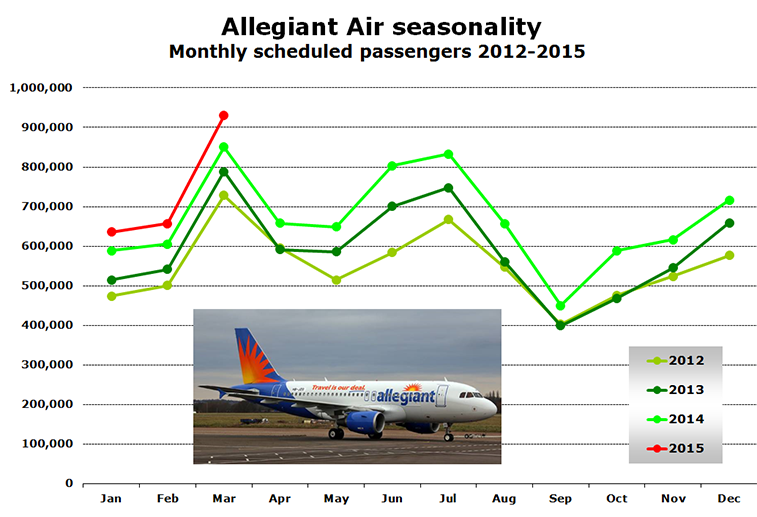 In March, coinciding with the tradition that is Spring Break in the US, Allegiant Air transported over 900,000 passengers in a single month for the first time, over 40% more than it carried in February, highlighting the airline’s strategy of matching capacity with demand. The next time the airline is likely to carry that many passengers in a single month is July. Between July and September capacity is cut by almost 50%.

Tuesday/Wednesday: a pilot’s “weekend” at Allegiant

If the airline’s flexing of its schedule by month is unusually pro-active, its approach to operations within a typical week are even more extraordinary. Targeting the leisure market the airline operates routes primarily on the basis of enabling passengers to take a weekend break. Many of the airline’s routes operate just twice-weekly, either on Fridays and Mondays, or on Thursdays and Sundays. In the peak summer month of July in 2012, Allegiant operated 79% of its flights on just those four days of the week – Mondays, Thursdays, Fridays and Sundays. This July that proportion has fallen slightly to 72%, reflecting the fact that with lower fuel prices, more off-peak flying is now financially viable. However, July itself is a peak month. Just two months later, in September (the airline’s quietest month), 89% of all flights operate on just the four main days of the week. 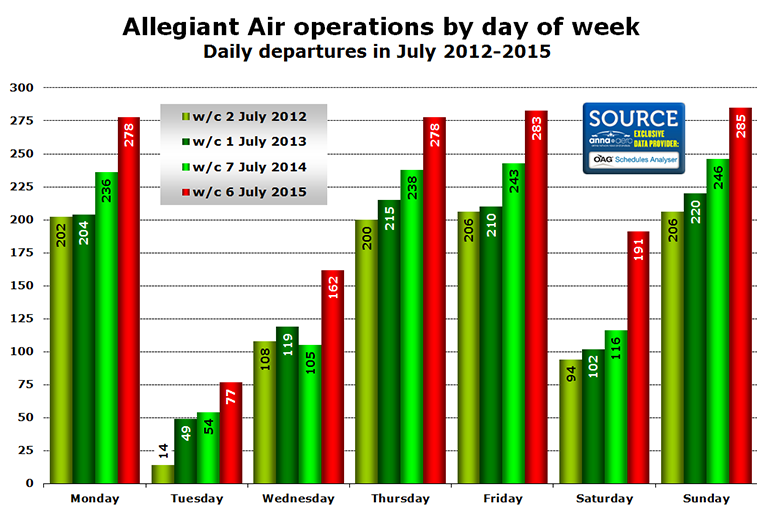 Analysis of schedule data for the airline’s peak summer month of July shows that Orlando Sanford is now the busiest airport as measured by aircraft departures. It has overtaken Las Vegas McCarran Airport which falls to second place this summer. St. Pete-Clearwater in Florida has overtaken Phoenix-Mesa in Arizona for third place confirming the airline’s apparent enthusiasm for all things Floridian. Punta Gorda has overtaken Los Angeles for fifth place, while Fort Lauderdale has seen an almost doubling in weekly flights. 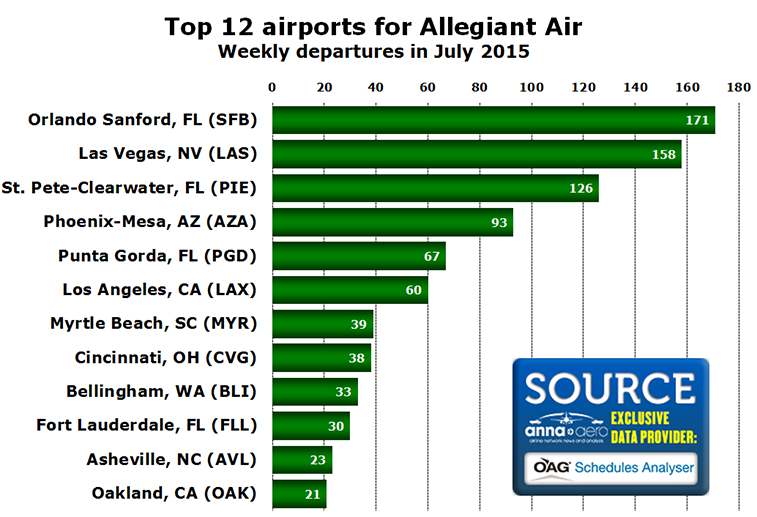 Cincinnati is a new entry among the airline’s busiest airports. The airline’s build-up of routes there in the last 12 months has been significant, growing from four routes last July (three in Florida plus Myrtle Beach) to 10 routes this July.

According to anna.aero’s New Route Database, Allegiant has launched 20 new routes since the beginning of 2015. These routes include the airline’s first operations to five new airports; Indianapolis, New Orleans, Omaha, Pittsburgh and Richmond. Of the 20 new routes 13 were launched with twice-weekly flights, two with thrice-weekly flights and five with four weekly flights (three from Indianapolis to Florida and two from Pittsburgh to Florida). This brings to 104 the number of destinations served by Allegiant in July 2015. At 14 of these airports Allegiant operates just two flights per week this summer, and at three of them (Portsmouth Pease International Airport in Florida, St. Cloud Regional Airport in Minnesota and Ogden Airport in Utah) it is the only operator of scheduled air services. 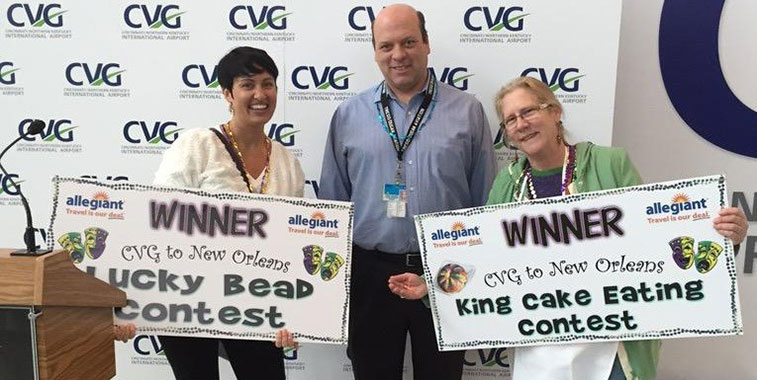 Allegiant began flying between Cincinnati and New Orleans on 4 February 2015. New Orleans became a new destination for the airline, while Cincinnati, where Allegiant only started operating from in February 2014, is now its eighth busiest airport with 38 weekly departures across 10 destinations this July.