On 18 June 2014 Münster/Osnabrück Airport became the 13th and most recent German airport to be connected with Turkish Airlines’ Istanbul Atatürk hub. Since the beginning of 2012 Turkish Airlines has also added new direct services to Bremen, Friedrichshafen and Leipzig. The majority of onward connecting passengers remain in Turkey.

Turkish Airlines has long had a significant presence in the German market, partly as a result of the large number of inhabitants of Turkish origin. Ten years ago the Star Alliance carrier was already serving nine German cities from its main hub in Istanbul. Between 2005 and 2011 (six years) the number of flights between Germany and Istanbul increased by 50% with the addition of no new services. However, between 2011 and 2015 (four years) the number of annual flights has increased by 60% and four new destinations have been added; Bremen in April 2012, Leipzig in May 2012, Friedrichshafen in May 2013 and, most recently, Münster/Osnabrück in June 2014. 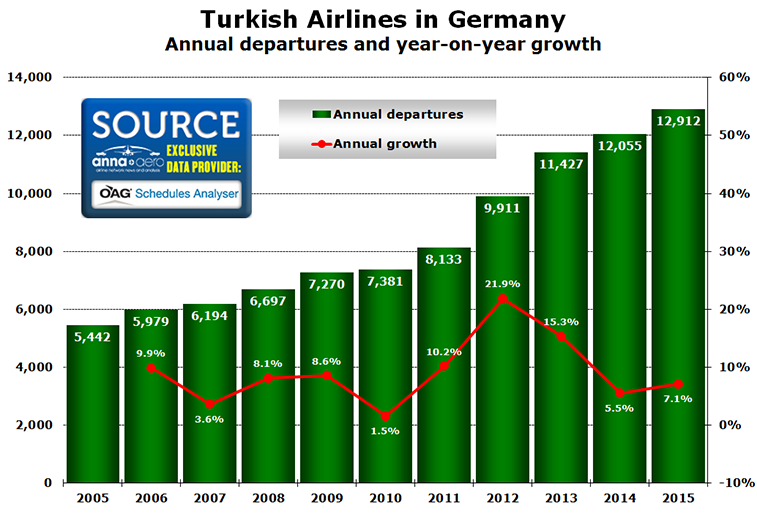 While Turkish Airlines is rightly proud of the fact that it flies to more countries than any other airline in the world, flying to as many as 13 destinations in a single, foreign country is also fairly unusual. How thrilled fellow Star Alliance member Lufthansa is about this is unknown. The two airlines are involved in a joint venture, SunExpress, a leisure airline based in Antalya, which also focusses on the Germany-Turkey market. Since 2011, there is also a Frankfurt-based subsidiary, SunExpress Germany, which operates flights from various German airports to leisure destinations across Europe and North Africa including Bulgaria, Croatia, Egypt, Greece and Spain as well as Turkey. This carrier will be the operator of Eurowings’ planned long-haul operations from Cologne Bonn Airport starting this winter.

Majority of connecting passengers are staying within Turkey

anna.aero was curious to analyse which of Turkish Airlines’ many onward destinations from Istanbul were the most popular in 2014 with passengers on the German routes to Istanbul’s Atatürk. Maybe unsurprisingly given the airline’s extensive domestic network, and the high number of Turkish diaspora living in Germany, the vast majority of the most popular routes were to other destinations in Turkey. For the purposes of this analysis, Münster/Osnabrück was omitted as there was less than a full year of data available.

Ankara, Antalya and Izmir are by far the most popular onward destinations. The only non-Turkish destinations to make the top five from any German airport are Beirut, Kabul, Tehran, Tel Aviv and most curiously, Shanghai (from Nuremberg). Of these only Tehran (from Berlin) made the top three. However, the #1 final destination for all German routes was, not surprisingly, Istanbul itself. 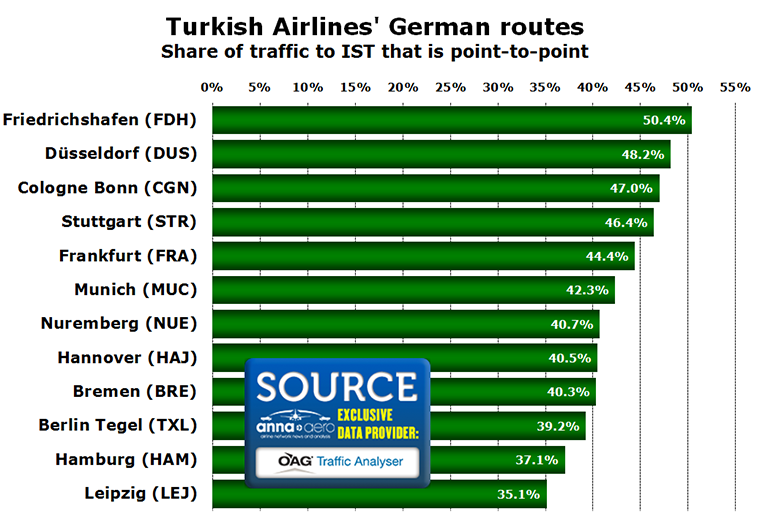 On all of the 12 routes that have been operating throughout all of 2014, the proportion of passengers on the route that were travelling point-to-point between the German airport and Istanbul Atatürk was between 35% (Leipzig) and 50% (Friedrichshafen).

Where next for Turkish Airlines?

Looking at the ranking of Germany’s airports in 2014, the biggest (by annual passenger numbers) that do not have connections to Istanbul with Turkish Airlines at present are; Berlin Schönefeld, Frankfurt Hahn, Dortmund, Weeze, Dresden, Karlsruhe/Baden-Baden, Paderborn/Lippstadt and Memmingen, all of which were busier airports in 2014 than Friedrichshafen. If we exclude Berlin Schönefeld and Frankfurt Hahn as alternative airports to cities already served, that suggests that Dortmund should be the most likely next destination in Germany. However, it will in fact be Karlsruhe/Baden-Baden (less than 100 kilometres from Stuttgart) which Turkish Airlines will start serving with four weekly flights from the end of June. 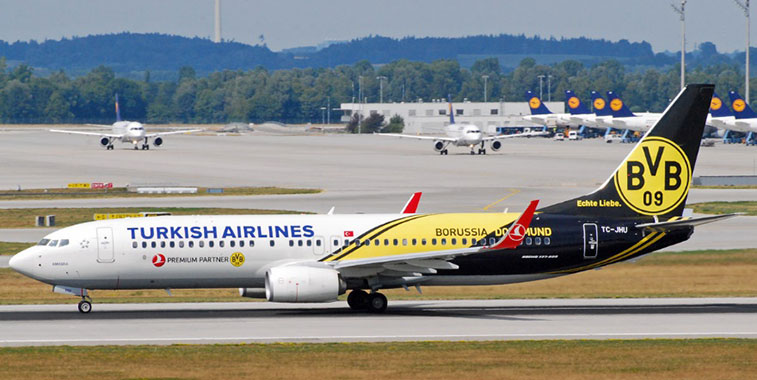 Dortmund is still waiting to join the list of German airports which Turkish Airlines serves directly from Istanbul Atatürk, but in 2013 the airline entered into a promotional partnership with the city’s successful football team (Borussia Dortmund) resulting in one of the airline’s 737-800s becoming a logojet.