On 20 March, Airbus celebrated the delivery of its 9000th aircraft at a ceremony in Hamburg. The aircraft is the first A321 to be delivered to Vietnamese carrier VietJetAir. Commenting on the delivery, John Leahy, COO, Airbus, said: “The delivery of our 9000th aircraft comes as we enjoy on-going strong demand for aircraft across our product line. The range of aircraft we offer today is unrivalled, meeting every airline requirement from 100 to over 500 seats with maximum efficiency, uncompromised comfort and broad customer appeal.”

Following the busiest February since anna.aero began collating delivery data in 2008, both Airbus and Boeing delivered more aircraft in the third month of 2015. The American manufacturer not only maintains its leading position over Airbus in terms of aircraft delivered this March, but also continues to lead the 2015 delivery race by 50 units (up from 31 in February). When compared to the first three months of 2015, the two producers managed to increase their combined deliveries by 16 units, with 318 aircraft incorporated by carriers into their respective fleets so far this year.

Having delivered more than 100 aircraft for the second time in 2015, the two manufacturers have once again recorded an impressive score. The combined deliveries of both producers for the third month of the year, was 123, of which 71 came from the American manufacturer, and 52 from its European counterpart. Interestingly, Boeing enhanced its performance when compared to the same month last year, delivering five more units, while Airbus handed over six fewer airframes. Overall, 31% of all March deliveries were wide-body aircraft, which is up 4% from February’s figures. 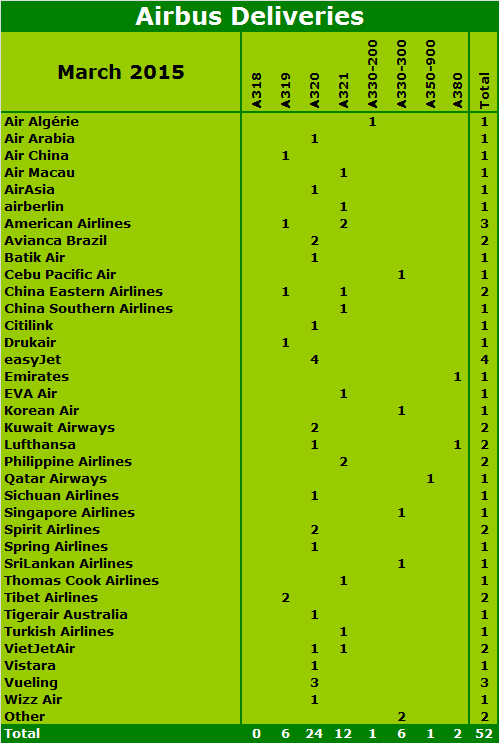 Airbus closed March with a total of 52 units delivered to airlines, which constitutes six more airframes than the amount delivered in February, but six fewer than in the corresponding month last year. Over the three completed months of 2015, the European producer delivered 134 units, representing a decrease of 5% (seven fewer units) on the same period of 2014.

Once again, narrow-body deliveries in March were led by the A320 (24 units) with 42 single-aisle aircraft provided to carriers around the world. The UK LCC, easyJet was one of three carriers to receive more than two narrow-body units from Airbus, as it incorporated four A320s into its fleet. Other airlines to receive more than two single-aisle units from the European manufacturer were American Airlines (one A319 and two A321s) and Vueling (three A320s). Besides this, a total of seven operators saw two Airbus narrow-bodies join their respective fleets in March, namely Avianca Brazil (two A320s), China Eastern Airlines (one A319 and one A321), Kuwait Airways (two A320s), Philippine Airlines (two A321s), Spirit Airlines (two A320s), Tibet Airlines (two A319s) and VietJetAir (one A320 and one A321).

Looking at wide-body deliveries, Airbus handed over 10 airframes in March, representing one more unit than in the preceding month, and three fewer than in the corresponding month of 2014. Following February’s delivery of one A380, the European producer handed over two units of the type in the third month of 2015, to Emirates and Lufthansa. Noteworthy is the fact that Qatar Airways took delivery of its second A350-900 on 4 March. The airline is using the aircraft for its second daily Doha-Frankfurt service. Moreover, Qatar expects to end the year with five A350-900s in service. On 22 March, Xiamen Airlines took delivery of its third 787-8 at Xiamen Airport, marking China’s first 787-8 equipped with satellite-based Wi-Fi capability. The carriers says it plans to use the aircraft on long-haul routes to Europe, North America and Australia. 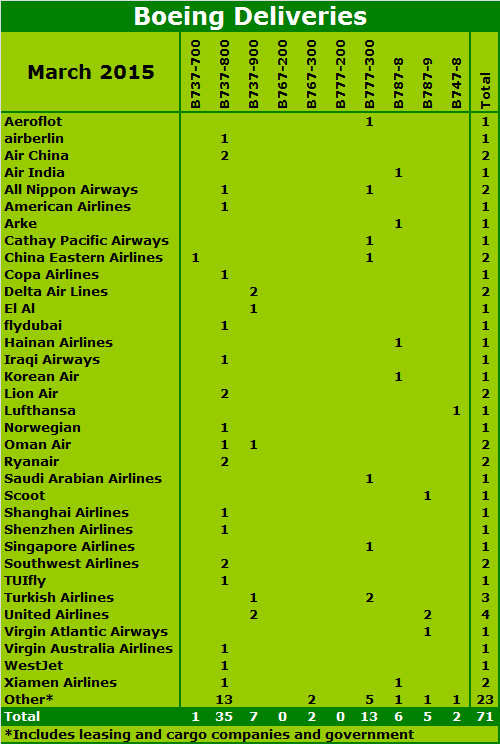 Analysis of the wide-body deliveries reveals that Boeing handed over a total of 28 units to airlines in March, eight more than in February. Moreover, the American producer bettered its year-on-year performance, delivering six more wide-body units than the 22 it managed in the corresponding month of 2014. Following six and eight 787-8s delivered to airlines in January and February, Boeing handed over a total of six units of the type reaching customers in the third month of 2015. In addition, five 787-9s were received by airlines, including two units by United.