If there’s a new route to Paris to celebrate you can pretty much guarantee there will be an Eiffel tower involved somewhere. transavia.com France launched service to Barcelona from Paris Orly last July (competing with Vueling), while Vueling added a link from its Paris Orly base to Fuerteventura last December (a route that used to be served by transavia.com France).

Paris Orly Airport has long been overshadowed in pure passenger numbers by the newer, further out-of-town hub of Paris Charles de Gaulle (CDG), but the airport continues to play a key role in Paris’ air transport system. Last year the airport handled a record 28.9 million passengers (up 2.1%), and the airport has been growing in each of the last five years. Domestic passenger numbers at Orly, which accounted for almost 60% of traffic in 2002, have fallen by 20% in the subsequent 12 years and now represent just 38% of the total. International traffic, however, has grown by 90% during the same period and now accounts for 62% of the airport’s passengers. 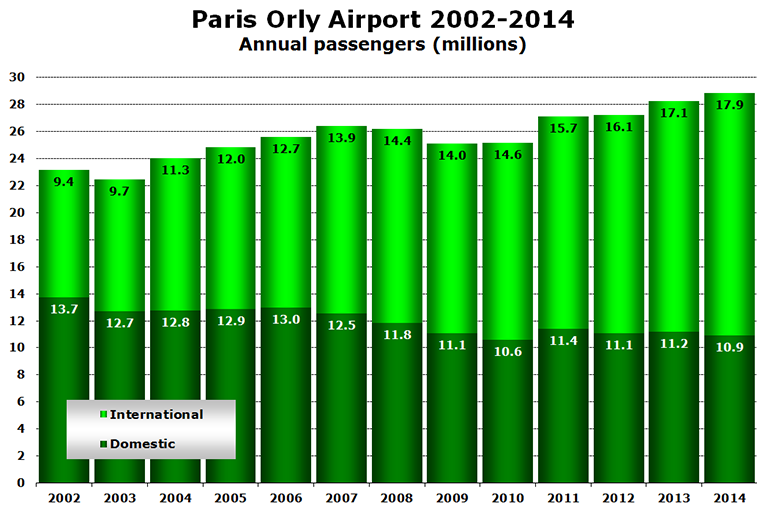 In terms of seasonality the airport scores an “Excellent” 1.43 on anna.aero’s SVID calculator, just beating CDG which scores an also “Excellent” 1.93. Orly’s peak month is usually July, though in 2014 it was August. The 6.2% fall in traffic in September 2014 can be explained by the two-week strike action at Air France. Without that, the airport would likely have broken through the 29 million passenger milestone at some point in December. In the first quarter of 2015 passenger numbers are up a modest 1.6%, while aircraft movements are up just 0.5%. 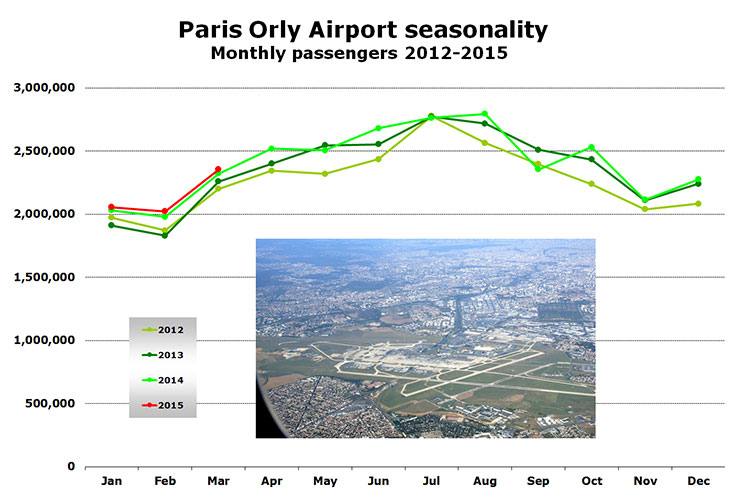 As might be assumed, the Air France Group is the dominant carrier at Paris Orly. It splits its operations between three carriers; Air France, transavia.com France and HOP! Between them they account for almost 44% of seat capacity in August, with Air France claiming 29% on its own. The next biggest airlines are two LCCs, Vueling (11%) and easyJet (8%). The latter began flights to Paris Orly from its Geneva base in May 2002 and now operates a network of 20 routes, including nine in Italy and two domestic destinations, Nice and Toulouse. Vueling arrived in Orly in July 2009 and now operates non-stop to 22 destinations, including 12 in Spain. 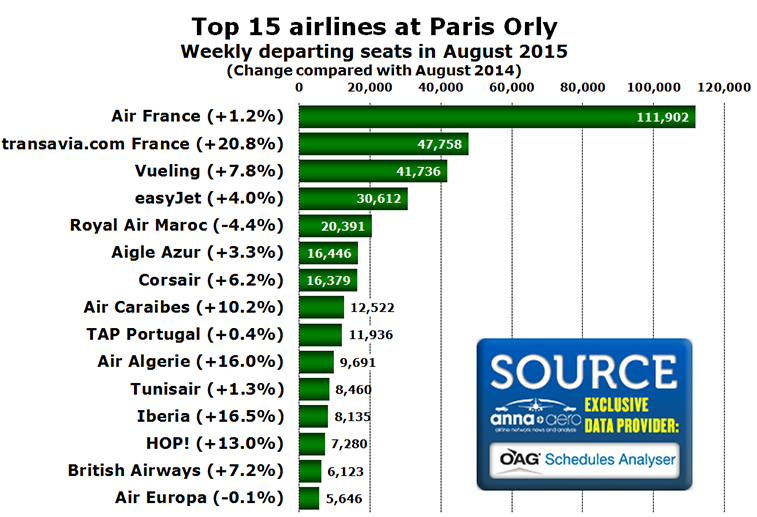 Unusually, between summer 2014 and summer 2015 Paris Orly has not gained any new carriers but nor has it lost any. A total of 28 airlines offer scheduled flights from the airport including established European carriers such as Air Malta, airberlin, Alitalia, Flybe, Norwegian, Pegasus and Transaero Airlines. More exotically the airport also hosts flights operated by Cubana and Iran Air.

Nice and Toulouse most popular routes

According to analysis of OAG schedule data for August, Paris Orly offers non-stop flights to over 130 destinations. The top two destination by seat capacity in August are Nice and Toulouse, with two other domestic destinations (in bright green) also making the top 15. However, it should be noted that during the summer peak many domestic routes see significant capacity reductions. A similar analysis for June shows Bordeaux ranked third and Marseille fifth, whereas in August they only rank 16th and 18th. 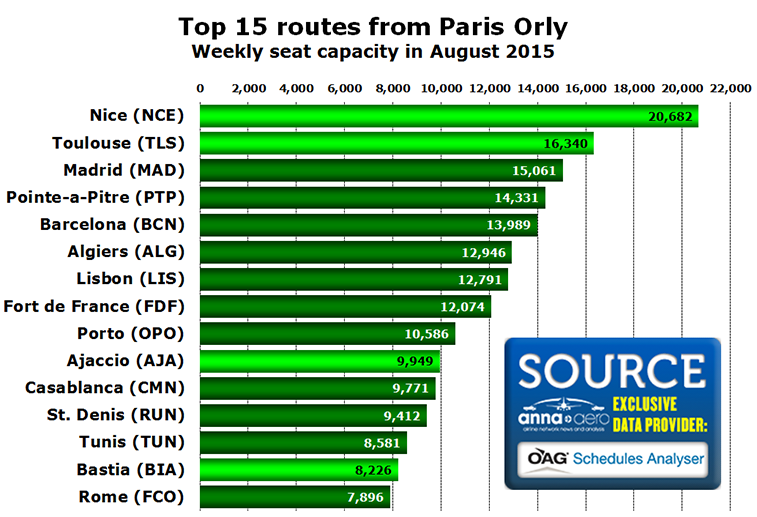 While most long-haul services from the airport are to various French territories, there are also transatlantic flights to New York JFK and Newark, operated by Open-Skies but flown under the British Airways brand and code. These operate daily using the carrier’s 757s which are configured with just 114 seats.

The fastest-growing airline at Orly is Air France’s low-cost subsidiary transavia.com France, which this summer is launching flights to nine new destinations across Europe and Morocco. As a result the carrier will serve over 40 destinations this summer, more than any other airline at the airport (Air France serves just 21). Vueling will be launching a total of five destinations during the summer season; two in Italy, two in Spain and one in Morocco. 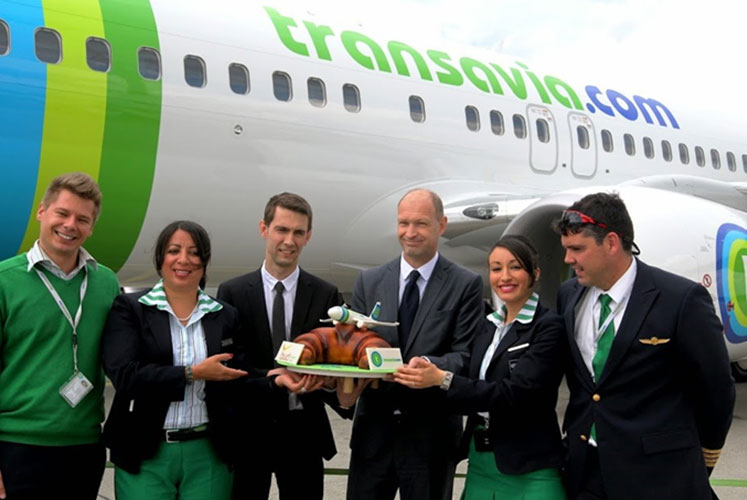 Ok, so not everyone goes for the Eiffel Tower cliché. Last April when Budapest Airport celebrated the arrival of transavia.com France from Paris Orly, it decided to celebrate with a croissant-shaped cake instead. This summer the route will be served five times weekly, up from thrice-weekly last summer.