At the end of March, KLM Royal Dutch Airlines signed an agreement to expand its joint venture with China Southern Airlines through a partnership with Xiamen Airlines. Beginning on 26 July, Xiamen Airlines, a fellow SkyTeam alliance member, will fly thrice-weekly between Amsterdam and Xiamen. The agreement was signed in the presence of Wilma Mansveld (Dutch Minister for Infrastructure and the Environment), between KLM CEO Pieter Elbers, Mr. Che Shanglun, Chairman & CEO Xiamen Airlines and Ren Jidong EVP of China Southern Airlines. The ceremony took place in Shanghai during the trade mission led by Dutch Prime Minister Mark Rutte. (Photo: news.klm.com)

In 2014, Xiamen Airlines transported over 20 million passengers for the first time. This represents growth of almost 10% over 2013, similar to the growth the SkyTeam member achieved in both 2013 and 2012. For the decade before that, annual growth had been in double digits with the exception of 2003 and 2008. With a fleet of over 100 Boeing aircraft, including four 787-8s, the airline, which was formed in 1984 and is owned by China Southern Airlines (51%), Xiamen Construction and Development Group (34%), and Jizhong Energy Group (15%), continues to expand internationally. In July it will launch its first ever flights to Europe, with the introduction of thrice-weekly flights from Xiamen to Amsterdam, in partnership with China Southern Airlines and fellow SkyTeam member KLM. 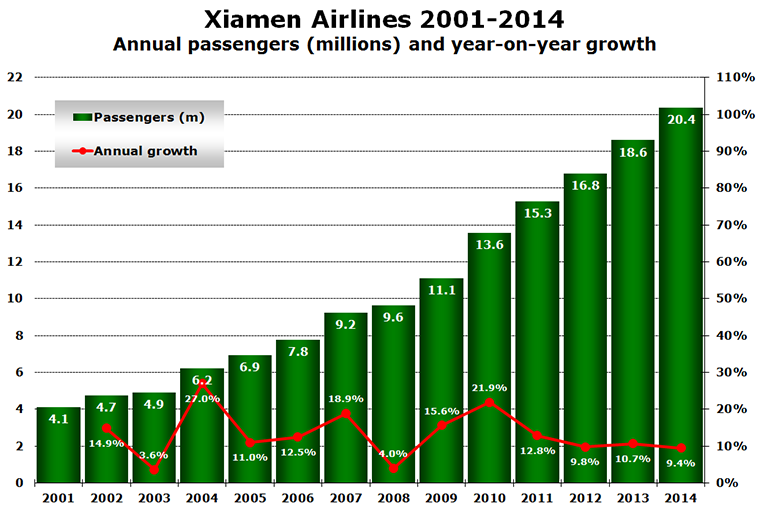 Xiamen Airlines’ home base at Xiamen is, not surprisingly, the airport’s busiest for weekly departures this summer. Xiamen Gaoqi International Airport ranks as China’s 11th busiest, handling 20.8 million passengers in 2014 (up 5.6%). While weekly flights have typically increased by between 0% and 20% among the airline’s busiest airports, departures at Changsha (+69%), Nanjing (+47%) and Jinjiang (+38%), have grown well above the average. 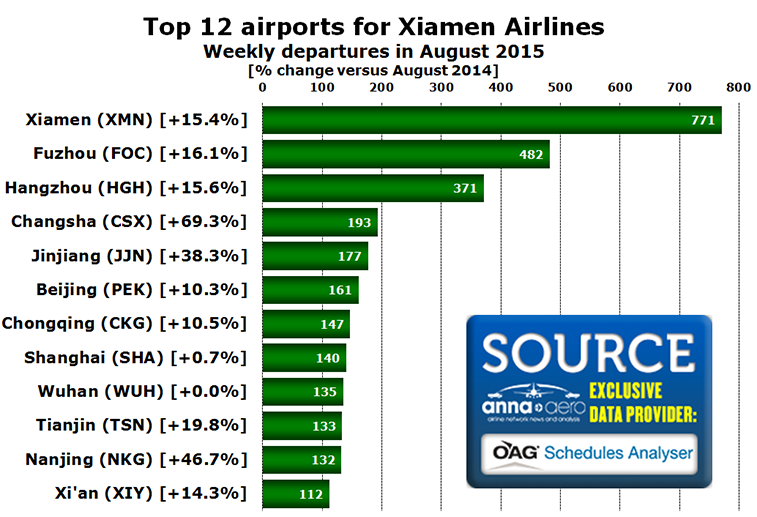 Three new routes to Osaka and two to Manila

According to analysis of OAG schedule data the airline will this summer operates 37 international routes, up from 31 last summer. Of these 15 are from Xiamen, 11 from Fuzhou, five from Hangzhou, four from Jinjiang and one each from Changsha and Taiyuan. Eight new international services have been added while two have been dropped (Fuzhou to Seoul Incheon and Jinjiang to Jeju).

A total of 15 non-Chinese airports will be served this summer with Bangkok Suvarnabhumi and Singapore leading the way, each connected by 42 weekly flights. Next come Hong Kong, Macau, Taipei Taoyuan and Osaka Kansai. The 9,313-kilometre service to Amsterdam will be by far the airline’s longest international route, beating the current record of 3,827 kilometres between Fuzhou and Jakarta in Indonesia. After entering the European market it seems the airline’s next target is Australia, with Sydney services hoping to be launched before the end of the year, by which time the airline will have acquired the last of its current order for six 787-8s.