“We’ll be there to defend our title:” Aer Lingus CEO leads charge to retain Fastest Airline In The World in BUD Runway Run 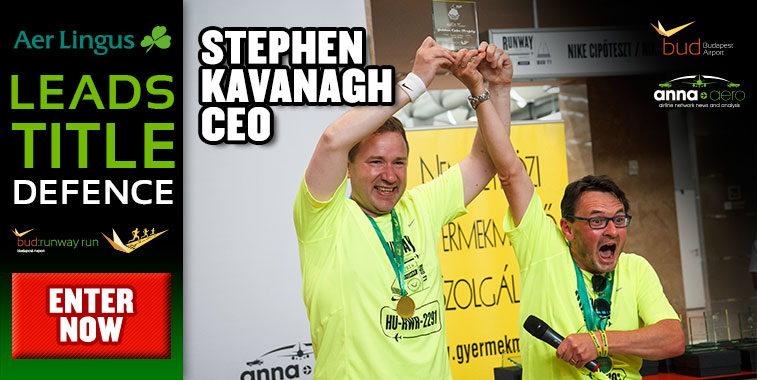 Stephen Kavanagh, the CEO of Aer Lingus, has told anna.aero that he will once again personally spearhead his airline’s entries into the Budapest Runway Run, the air transport industry’s annual “Race to Find The Fastest Airline In The World” which will take place on Budapest Airport’s Runway 13R-31L at 11.00 on Saturday 5 September 2015.

On this day Budapest Airport will close one of its two runways for four hours so runners drawn from airlines, airports and enterprises across the aviation community can once again compete for a series of anna.aero-Budapest Airport “Golden Cake Trophies”, including the key team prize of the “The Fastest Airline in the World.”

There are two race distances – 10km (four runway lengths) and 5km. Runners can take part on an individual basis, or form teams of three or more (only the fastest three runners’ times count towards the team times). Aer Lingus sealed its 2014 victory by fielding two teams of four runners. Therefore Kavanagh’s promise that Aer Lingus will defend the Budapest Tarmac in “greater numbers” suggests the CEO is mounting a defence of overwhelming proportions, as well as athletic talent: Last year Aer Lingus won both the top team prize as well as bringing the fastest runner to Budapest in the form of  Robert Murphy, an Aer Lingus Fleet Cost Manager, who led from the start to beat all other 609 competitors and take the individual prize of “Fastest Aviator” in a blistering 10km time of 34:16.

Kavanagh: “a medal to treasure”

All BUD Runway Run entry fees – just €30 before July 2015 and €50 thereafter – are entirely donated to international child cancer causes and a Hungarian charity assisting the inclusiveness of handicapped people in sports. Besides nine air transport industry trophies every finisher receives “The Bron’s Medal” named for Brontë “Bron” Hogan, the anna.aero publisher’s 12-year-old daughter, who passed away in 2011 after a five-year battle with leukaemia. “It’s a wonderful event and, in addition to the team prizes, we all went home with a medal to treasure” said an emotional Kavanagh at last September’s prize presentations. anna.aero found him even more fired up about BUD Runway Run 2015: “I’d wholeheartedly recommend the benefits of participation to any people-minded airline or air transport enterprise, but I’d also counter that with a warning that as an immensely proud, fast-expanding brand, retaining ‘Fastest Airline’ is something that the men and women of Aer Lingus are absolutely resolute about.” 609 participated in BUD Runway Run 2014; anna.aero and Budapest Airport are targeting 1,000 runners of all abilities in the 2015 edition of the air transport industry’s charity race.