Last year, airberlin celebrated its 35th birthday at Berlin Tegel Airport with a special liveried 737 and some ‘special editions’ of its famous chocolate hearts. Berlin remains, not surprisingly, the airline’s biggest base and this year will operate non-stop to over 60 destinations from what is still, for the moment, the biggest airport serving the German capital. (Photos: airberlin/Günter Wicker)

With a new CEO (Stefan Pichler) and new CCO (Julio Rodriguez from 1 June), airberlin would seem to be signalling its intention to make (yet another) fresh start. Germany’s second biggest airline is a member of the oneworld alliance (since 2012), but is also an Etihad Partner Airline and is still trying to juggle the conflicting demands of being a business and leisure airline, and operating both short-haul and long-haul flights, from a variety of German bases. From a network perspective the airline’s biggest base of operations is still Berlin Tegel in its home city. It still operates more than twice as many flights from the airport as any other airport in its network, with the exception of Düsseldorf. 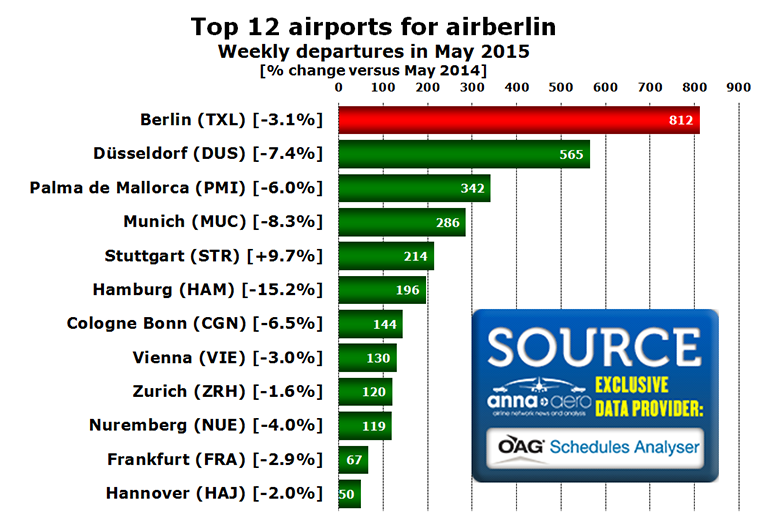 Analysis of schedule data for this May and a comparison with last May reveals that airberlin has been pruning flights at nearly all of its busiest airports, with the exception of Stuttgart (which will see a new multiple-daily service to Milan Linate start in May).

airberlin’s presence at Tegel grew significantly between 2006 and 2008 when it acquired dba, the airline formerly known as Deutsche BA. While airberlin at the time operated virtually no domestic flights, dba operated an almost 100% domestic network, competing with Lufthansa on Germany’s busiest domestic trunk routes. This included several from Tegel. As a result, airberlin’s annual flights from Tegel virtually trebled in just two years. Since then, airberlin has added more routes and destinations from Berlin, including several long-haul destinations using aircraft acquired when it absorbed another carrier, LTU, in 2007-08. airberlin is now by far the biggest airline at Berlin Tegel with around 45% of seats and flights in August 2015, well ahead of germanwings (13% of seats) and Lufthansa (11%). 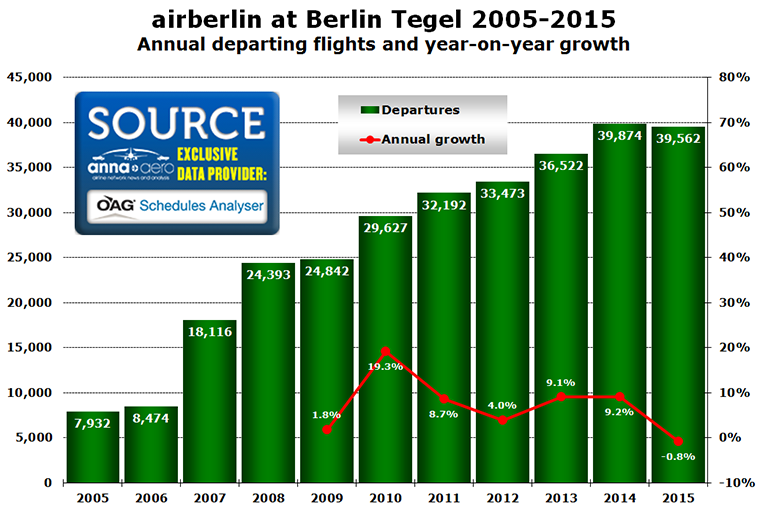 Germany and Spain down, Austria and UAE up

While overall airberlin has cut capacity at Berlin Tegel by a small amount this summer, not all country markets have been equally affected. Five of the top 12 country markets have seen capacity cuts including the two biggest, the German domestic market and the Spanish market. Italy, Russia and the US have all seen capacity cuts of more than 20%. On the upside, Austria, Denmark and Poland have all seen double-digit growth, while UAE sees a doubling of capacity as airberlin now serves Abu Dhabi twice-daily instead of daily. 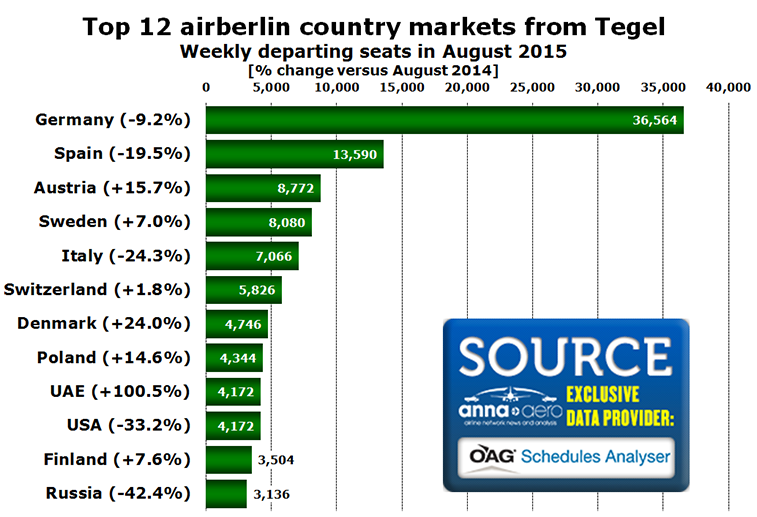 Last week airberlin launched its first new destinations from Tegel since March 2013 with the addition of Billund and Prague to its network. The only other new route added since Chicago O’Hare was launched just over two years ago, was to Milan Linate last October, but that was merely a transfer of services from Milan Malpensa. This summer will see airberlin serve 61 destinations non-stop from Tegel, down from a peak of 67 in the summer of 2013. Since then, airberlin has ceased operations to Barcelona, Enfidha (Tunisia), Los Angeles, Miami, Milan Malpensa, Oslo Gardermoen, Punta Cana (Dominican Republic), Sofia, St. Petersburg and Venice Marco Polo. Other significant destinations once served by the carrier from the German capital include Amsterdam, Bangkok, Basel, Dubai and London Stansted. airberlin’s last new long-haul service from Berlin Tegel was launched on 23 March 2013 to Chicago O’Hare. With knives at the ready to cut into the celebratory cake were: Klaus Wowereit then Governing Mayor of Berlin; Wolfgang Prock-Schauer, then CEO of airberlin; Hartmut Mehdorn, then Chief Executive of Berlin Brandenburg Airport; and James Melville, Deputy Chief of Mission of the Embassy of the United States of America.