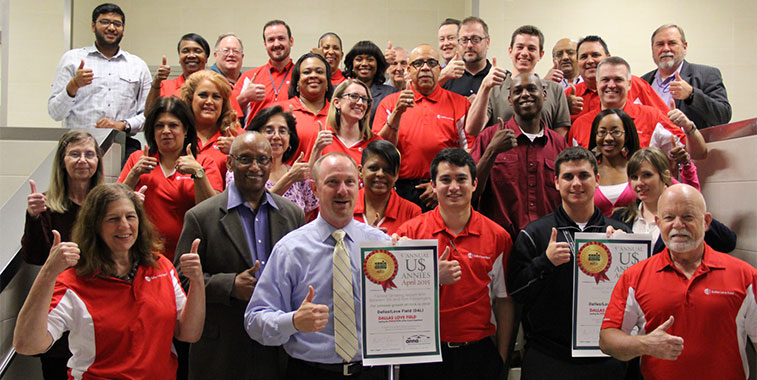 Posing with their US ANNIES certificates after securing two awards (“The Fastest-Growing Airport in the 5m-10m category” and “The Airport with the most new routes”) is the Dallas Love Field Airport team.

The award season starts at anna.aero this week, with the fifth US ANNIES being the first of three annual prize-giving ceremonies (the others being Asian and European ANNIES). The US airline industry is having a sustained period of impressive profitability, but what impact is this having on route development at the country’s airports? Our awards, probably more awaited by the world’s airport and airline industry than the Skytrax awards, dig deep into the data to reveal the winners in seven airport categories this week. The US airline awards will follow next week.

The US ANNIE awards are based on science, statistics and evidence rather than people’s opinions (and votes). Using OAG scheduled data for 20-26 April 2015 compared to 21-27 April 2014 across over 630 US airports, our team of data elves have pored over the figures and we think we have come up with a more transparent way of rewarding airlines and airports that have achieved notable route and traffic related success in the US over the last 12 months.

This year’s four main awards are spread across four different states in the US. Nonetheless, including the runners-up in each category reveals that of the eight airports celebrating success, there are two representatives for Texas, with one for Washington, Connecticut, Florida, South Carolina, Georgia and Missouri. This year, all of the airport growth awards are based on actual passenger statistics (according to anna.aero’s American Airport Traffic Trends database) rather than capacity data, making them an even more accurate barometer of which airports have seen the biggest increase in demand.

Seattle-Tacoma secures victory in this category, beating last year’s winner Houston Hobby and claiming the prize as the fastest-growing airport handling more than 10 million passengers in 2014. Reporting a passenger number increase of 7.7% to 37.5 million in 2014, the primary gateway to the Seattle area edged Houston’s second airport, which only increased its passenger throughput by 7.5% from 11.1 million to 11.9 million.

In the 5-10 million passengers section, Dallas Love Field wins this award thanks to a year-on-year increase of 11.1% from 8.5 million in 2013 to 9.4 million passengers last year, beating off Hartford-Springfield/Bradley in Connecticut, which saw its passenger throughput grow from 5.4 million to 5.9 million, an increase of 8.3%. Love Field achieved this massive growth due to the Wright Amendment having expired on 13 October 2014. The 1979 federal amendment was designed to limit most non-stop services from Love Field to destinations within Texas and neighbouring states, in order to protect Dallas/Fort Worth. Following its expiration, Southwest Airlines and Virgin America have expanded rapidly at Dallas’ second gateway. 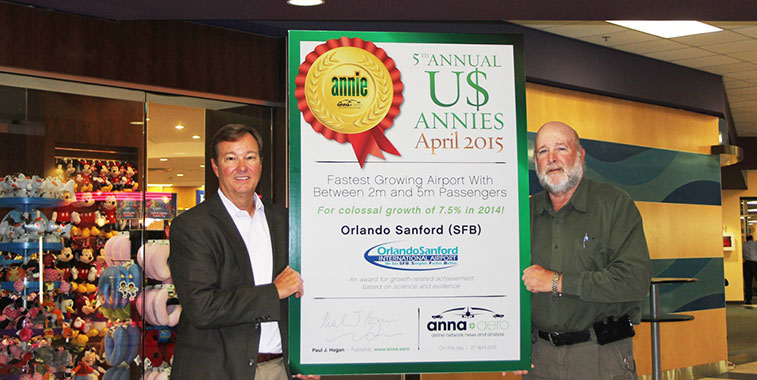 In the closest battle for victory in the airport growth awards, Orlando Sanford in Florida (which is operated through a public/private partnership between the Sanford Airport Authority and Airports Worldwide) just beat off competition from Charleston in South Carolina, to claim the prize in the two to five million passenger category. Sanford posted traffic growth of 7.48% from 2.0 to 2.2 million passengers in 2014, while Charleston’s growth of 7.46% from 2.9 to 3.1 million passengers was just not enough. Sanford’s growth was triggered by Allegiant Air, which has expanded massively at the Floridian gateway over the past 12 months. 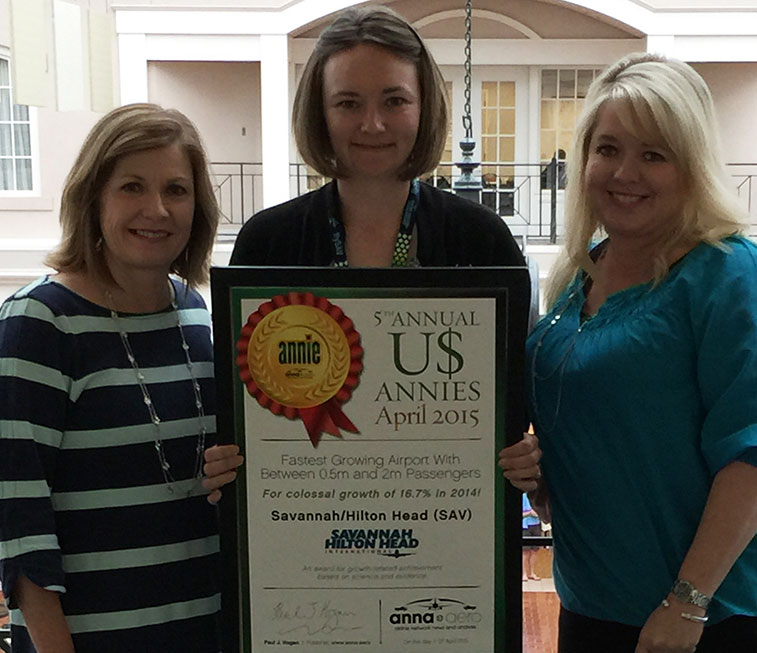 In the smallest airport size category there was a convincing win for Savannah/Hilton Head in Georgia, which won the US ANNIE in this category thanks to a passenger growth of 16.7%, by handling 1.9 million passengers in 2014. This easily beat the 11.9% increase in passengers posted by Springfield-Branson in Missouri, which saw demand go up from 755,773 to 846,324 travellers last year.

Airport With The Most New International Routes 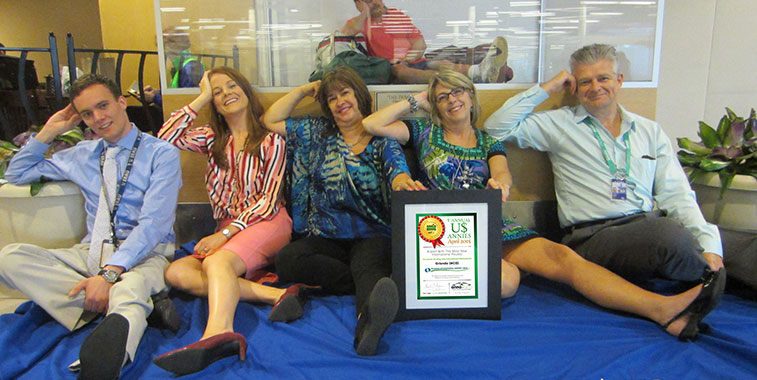 This year’s winner, with a net of seven routes, is Orlando, which increased the number of international destinations served from 34 to 41 between April 2014 and April 2015. New long-haul destinations that became available from the airport during the year included Copenhagen and Oslo Gardermoen with Norwegian, and Sao Paulo Viracopos with Azul Airlines. In addition, two new Bahamian destinations (North Eleuthera and Freeport) were also added, along with Guadalajara in Mexico, Punta Cana in the Dominican Republic and Deer Lake in Canada; while Orlando has lost San Salvador in El Salvador over the last 12 months. Trailing not far away behind with a net gain of six new routes are New York JFK and Miami airports.

Dallas’ second gateway at Love Field is again the clear winner of this prize, having gained a net of 23 new routes, when comparing this April’s OAG scheduled data with that of the corresponding month last year. In fact Love Field saw the addition of a total of 26 new destinations (most of which have been introduced by Southwest), but lost services to Houston Intercontinental and Harlingen in Texas, as well as to Branson in Missouri. Looking at the runner up, Miami has attracted a total of 14 new destinations with the loss of only three routes, between April 2014 and April 2015. 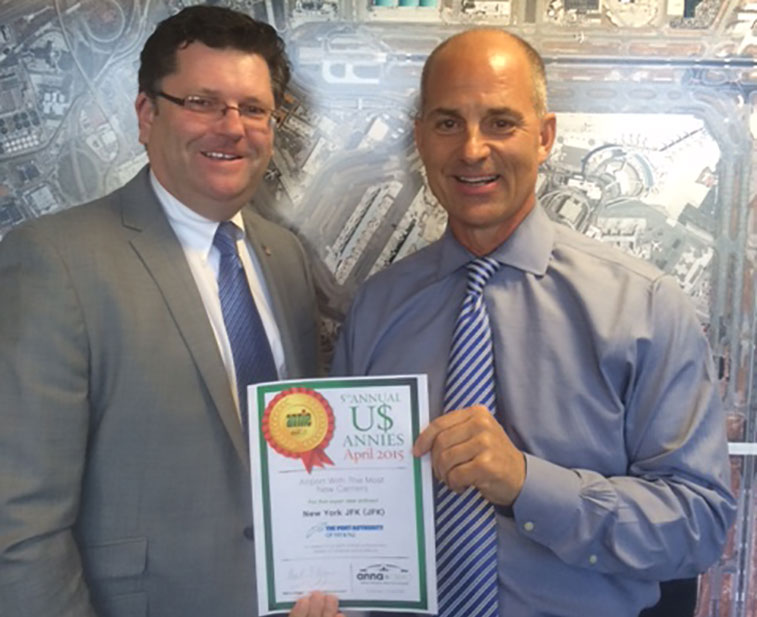 This award goes to New York’s primary airport at JFK, which has gained a net of five new carriers during the last 12 months, taking the number of scheduled airlines at the airport in April 2015 to 72. Nonetheless, while it has welcomed XL Airways France, Dynamic Airways, China Southern Airlines, Philippine Airlines, Meridiana and Azerbaijan Airlines, JFK has also witnessed the “loss” of WestJet. This is down to a technicality as last year the airline’s seasonal Calgary service started at the end of April, whereas this year the service resumes on 3 May, just outside our analysed time period. There is a tie for second spot, between Washington Dulles and Dallas/Fort Worth, both being one new carrier behind the winner. Both Dulles and Dallas/Fort Worth have welcomed five new carriers, but lost one, resulting in a net gain of four.