5th US ANNIES honours Southwest Airlines, Delta Air Lines and Allegiant Air; Azul Airlines does it for the little guys! 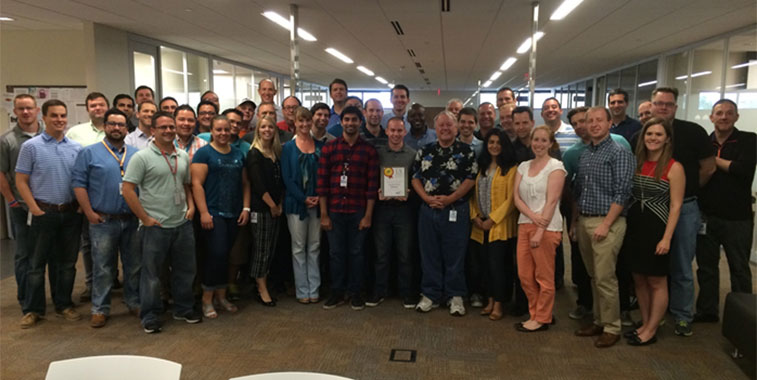 Proudly celebrating Southwest Airlines’ win in the fifth US ANNIES is the LCC’s network planning team. The carrier was awarded the “Airline with the most new routes” prize for expanding massively with a net of 64 new routes in the last 12 months.

Four airlines have won awards in the 2015 US ANNIES– Part II (the winning airports were announced last week in Part I). Remember, all awards are based on science, statistics and evidence rather than people’s opinions (and votes). Using OAG scheduled data for 4-10 May 2015 compared to 5-11 May 2014 for nearly 220 airlines serving the US market, our team of data elves have pored over the figures and we think we have devised a more lucid way of rewarding airlines that have achieved notable route and traffic related success in the US over the last 12 months. 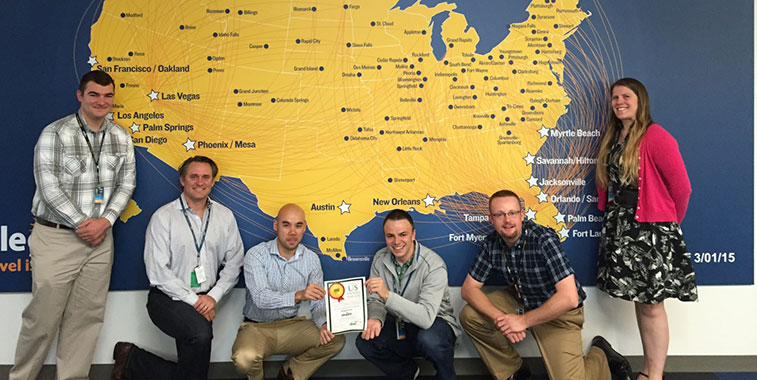 Going one better this time around, the airline with the biggest net gain in the number of US airports is Allegiant Air (last year’s winner in this category) with a net of six new US airports, beating joint runner-ups SeaPort Airlines and Volaris into second place (both totting up five new US airports). Over the last 12 months, the ULCC (now operating at 101 airports across the US) has added a total of 10 new airports, but has dropped four over the same period. The airports to have welcomed Allegiant’s services for the first time since last May were Indianapolis, Pittsburgh, Concord, Raleigh-Durham, New Orleans, Jacksonville, Richmond, Savannah/Hilton (last week’s winner of the “Airport Traffic Growth Awards 0.5m-2.0m”) and West Palm Beach. Contrarily, Allegiant has ceased operations at Lansing, Islip, Newport News as well as Rochester.

To determine the winner in this category, scheduled data for 4-10 May 2015 and 5-11 May 2014 is compared to determine which airline has reported the biggest net gain in international services from US airports. Applying this approach results in Delta Air Lines receiving this US ANNIE prize for a net gain of 25 new international routes, with the addition of 39 new links and the loss of 14. The SkyTeam member won this award beating by three new routes Southwest Airlines into #2 spot. Among the international routes having launched by Delta since last May were the daily flights from Philadelphia and Los Angeles to London Heathrow, the five weekly departures from Salt Lake City to Amsterdam or the weekly seasonal flights from Tampa to Cancun. Interestingly, on 2 September 2014, Delta converted its previously seasonal service between New York JFK and Zurich to a year-round service. With the JFK service now being daily all year-round, the Atlanta-Zurich service became a summer seasonal flight. Following the Wright Amendment’s expiration on 13 October 2014, Southwest Airlines has expanded massively at Dallas Love Field Airport, introducing a total of 23 airport pairs. Its rapid expansion at Dallas’ second gateway has partly helped the ULCC to win the “Airline with the most new routes” award.

To win this award Southwest Airlines has expanded hugely with a net of 64 routes in the last 12 months, increasing its network from 548 to 612 airport pairs as of May 2015, easily beating Spirit Airlines (that recorded a net of 40 routes) into second place. The 64 routes included 23 airport pairs having been launched from Dallas Love Field (that secured two awards “The Fastest-Growing Airport in the 5m-10m category” and “The Airport with the most new routes” last week). A further three international links involved expanding at Chicago Midway on 2 November and another two emanated from Milwaukee to Montego Bay and Punta Cana on 24 January. Following the introduction of its daily departures to Fort Lauderdale on 1 December and Orlando on 15 December, Azul Airlines added an US ANNIE prize to its celebrations as it secured the “Biggest ‘new’ airline in the US market” with 4,080 weekly seats offered this May. Cutting the celebratory cake’s first slice at Orlando are: David Neeleman, Founder and CEO, Azul Airlines; and James E. Rose, Deputy Executive Director, Business Services and Facilities, Greater Orlando Aviation Authority.

This award goes to the airline with the most scheduled seats operating from US airports in May 2015 that was not operating in, or to, the US in May 2014. Therefore, this year’s prize goes to Azul Airlines, the Brazilian LCC founded in May 2008 by David Neeleman, which launched its first international flights to the US on 1 December 2014, when it commenced daily flights from its Sao Paulo Viracopos base to Fort Lauderdale. Two weeks later, on 15 December, Azul commenced its second route to the US, this time with daily departures from Viracopos to Orlando. At 4,080 weekly seats offered this month, the Brazilian carrier is slightly ahead of runner-up, Branson AirExpress that offers a capacity of 3,140 seats this May, split over seven airport pairs (all being served with thrice-weekly flights).