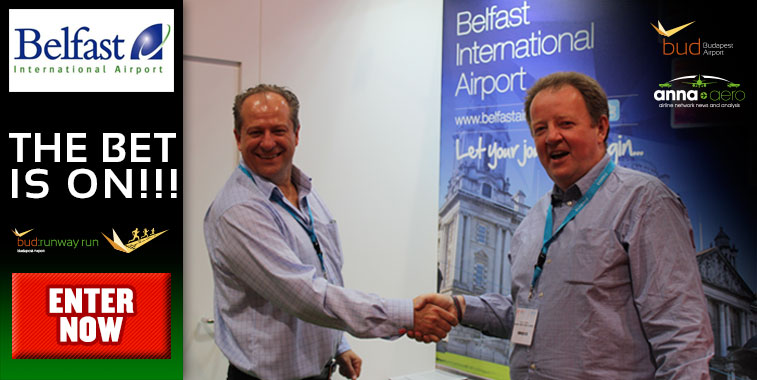 Belfast International Airport’s athletes in training: Brian Carlin, Director of Commercial Development, and Graham Keddie, Managing Director, shake hands on a €200 bet to beat one another in the 10km Budapest Runway Run. The annual air transport industry charity race on the Hungarian airport’s Runway 13R-31L is expected to attract 1,000 competitors from airlines, airports and other worldwide aviation enterprises.

Usain Bolt claims he ate 1,000 Chicken McNuggets during the 2008 Beijing Olympics in preparation for his three gold medals, so there has to be some hope for the two Belfast International Airport senior executives Brian Carlin, Director of Commercial Development, and Graham Keddie, Managing Director, who have not only unhesitatingly signed up for the Budapest Runway Run, but have further bet €200 against beating one another in the 10km charity race – with all winning proceeds donated to child cancer and other good causes. 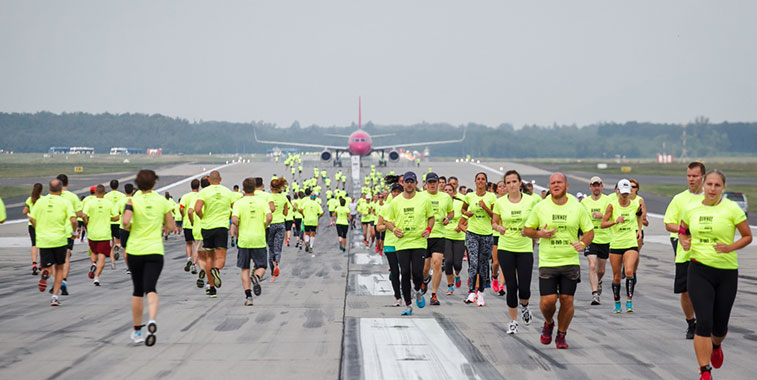 On 5 September Budapest Airport will close one of its two runways for four hours so runners drawn from airlines, airports and enterprises across the aviation community can once again compete for a series of key team prizes including “The Fastest Airline in the World.” 609 participated in 2014; anna.aero and Budapest Airport are targeting 1,000 runners of all abilities in 2015.

“I’ve got a wee bit of catching up to do, but I’m also mindful that over-training is a condition that befalls even the best athletes, so I’ll be resisting all my natural urges to workout in every spare moment,” Keddie told anna.aero. Carlin was only slightly less cautionary in describing his race strategy: “I don’t expect to have to be reaching into my pocket to settle this bet; I only enter competitions with the solid expectation of winning.”

Both airport executives are planning to take part in the 10km distance (four runway lengths), although there is a less arduous 5km race. Runners can take part on an individual basis, or form teams of three or more (only the fastest three runners’ times count towards the team times).

All Budapest Runway Run entry fees – just €30 before July 2015 and €50 thereafter – are entirely donated to international child cancer causes and a Hungarian charity assisting the inclusiveness of handicapped people in sports. Besides nine air transport industry trophies, every finisher receives “The Bron’s Medal” named for Brontë “Bron” Hogan, the anna.aero publisher’s 12-year-old daughter, who passed away in 2011 after a five-year battle with leukaemia.

In addition to their race against each other, as an airport leader Keddie has also automatically been entered for the “Fastest Airport CEO Golden Cake Trophy” which is jointly awarded by anna.aero and Budapest Airport. 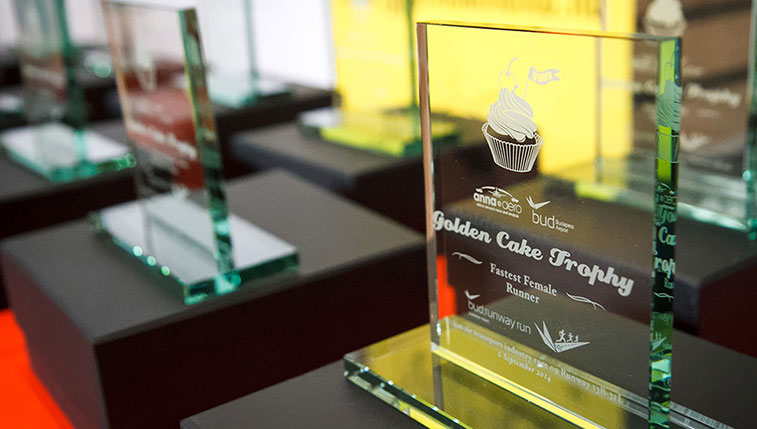 In another recent win in April, Belfast International Airport announced it had successfully bid to stage Routes Europe 2017. The network planning event regularly attracts 1,200 aviation professionals, including over 100 airlines, along with hundreds of airports and tourism authorities. “Belfast International put in considerable effort into attracting Routes Europe to Belfast for 2017. This is an exceptional opportunity to showcase Northern Ireland and set out how we want to be better connected to Europe,” said Keddie. “Routes Europe is to be congratulated for selecting Belfast, and now it’s up to us to make the most of the venture.”